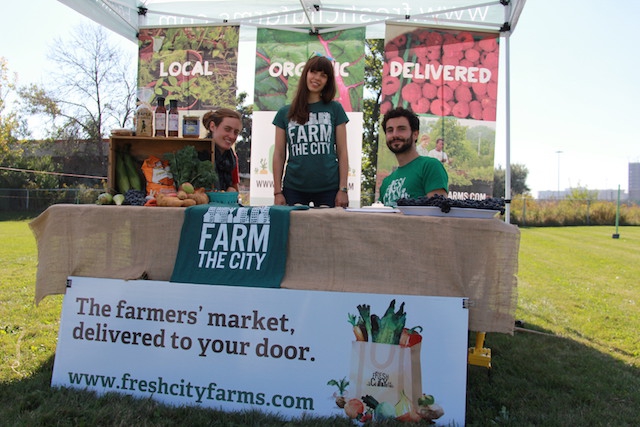 In honour of the milestone, Baka announced it is donating the use of the land outside its corporate offices—just off Highway 427 at Rathburn Road—to urban farmers at Fresh City, a local and organic food company. The land will house a 4,000-square-foot greenhouse and surrounding field crops.

“We’ve always been committed to sustainable business practices that go beyond ROI,” said John Marion, president and founder of Baka.

“We use Return On Doing Good, or RODG, as a guiding principle to ensure that we are contributing to healthy communities. This partnership with Fresh City, as a way to celebrate our 30 years in business, does exactly that.”

Produce grown in the greenhouse and the surrounding field will be available to 1,000 new Fresh City members, as well as the Baka Gallery Cafe kitchen. The plot of land is estimated to produce 20,000 pounds of produce per year, delivered with 75 per cent less CO2 emissions than “conventional” food sources.

“We’re looking forward to this partnership with Baka and the opportunity it presents for us to continue farming fresh, organic groceries right in the city,” said Ran Goel, CEO and founder, Fresh City. “It takes land to grow food, and with real estate so expensive in Toronto this is an enormous help to us.”

Goel said they hope to grow through three seasons and eventually all four.

Fresh City liked the idea of using an existing structure (which are between 15 to 30 years-old, according to Goel) when it came to greenhouses for environmental reasons, he said.

“The walls are about six feet and they taper off at about 16 feet and it’s all glass,” Goel said.

He noted the most expensive part will be in moving the greenhouse from its current location.

One of the biggest obstacles in urban farming is tenure, Goel said, and Fresh City is trying to respond to that by refurbishing a greenhouse, one that ideally doesn’t have to connect to the grid in any fashion.

“If we can make it self-contained by using solar panels and renewable forms of energy, and capturing rainfall for watering purposes, that will go a long way.”

The greenhouse will employ two full-time employees and is expected to be operational by spring 2016.

Visit Electrical Business for more on this announcement.

Renée Francoeur is the assistant editor of Electrical Business, a sister publication of Greenhouse Canada within the Annex Business Media family of business-to-business (B2B) magazines.