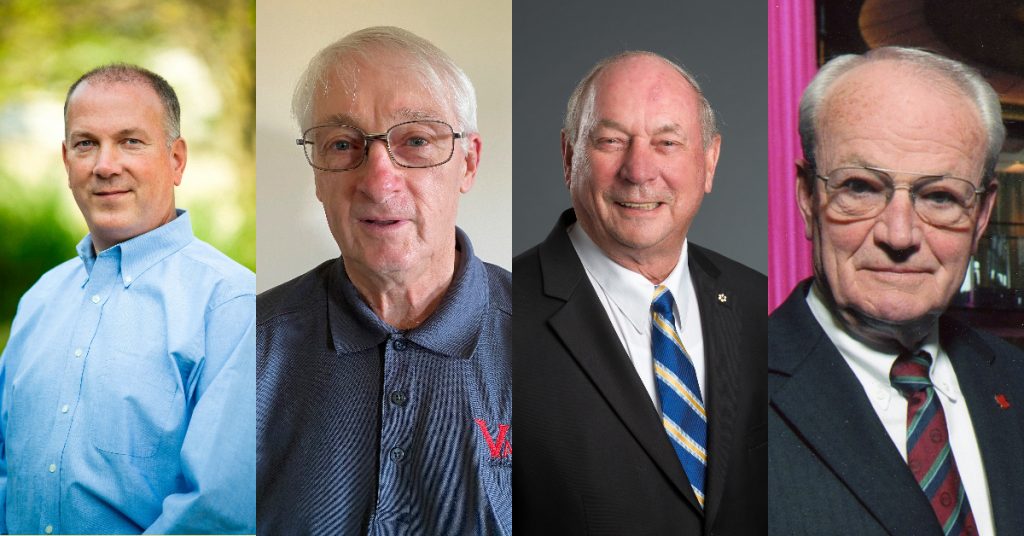 Jay Bradshaw, James Halford, Bryan Harvey and Douglas Hedley have been selected as the 2020 inductees into the Canadian Agricultural Hall of Fame

Lifelong agricultural ambassadors Jay Bradshaw, James Halford, Bryan Harvey and Douglas Hedley have been selected as the 2020 inductees into the Canadian Agricultural Hall of Fame.

Agribusiness leader Jay Bradshaw began his 36-year career in Canadian agriculture with a sales territory in Saskatchewan. He saw Cyanamid through the successful acquisition by BASF before joining Syngenta Canada, serving as president until his retirement in 2018. Jay is a skilled communicator and lifelong advocate for the advancement of modern farming technology. He’s behind several collaborative initiatives in the industry including GrowCanada – a coalition of national stakeholders to advance agricultural innovation and sustainability, and CleanFarms – a successful agricultural container recycling program. A highly respected leader, Jay has effectively helped shape organizational direction with his bold vision for the future of farming. Jay Bradshaw lives in Guelph, ON and was nominated by Syngenta Canada Inc. and CropLife Canada.

Soil conservation champion James Halford pioneered zero tillage farming in Saskatchewan and across the Prairies. When he began his career as a farm management specialist with the Saskatchewan Department of Agriculture, he also took over the family farm and saw the need for soil conservation practices. An agricultural economist, farmer and entrepreneur, Jim’s Vale Farms invented, manufactured and marketed the ConservaPak® seeder in the 1980s – zero tillage equipment that would ultimately be sold to John Deere. Jim shared his farm with researchers to study the effect of long-term zero tillage on soil properties and crop yield. His commitment to conservation saw him invent/co-invent more than 20 patents related to farm equipment and be recognized with numerous soil conservation awards. James Halford lives in Indian Head, SK and was nominated by Léona Watson.

Renowned plant breeder Dr. Bryan Harvey developed more than 60 varieties of barley throughout his prolific 50-year research career. At the University of Saskatchewan, his ground-breaking research developed two-row malting barley varieties that would deliver tremendous returns to Canadian agriculture and the malting industry. His most notable variety, Harrington, became the gold standard for two-row malting barley and the dominant variety across the Prairies for more than 20 years. An esteemed academic, Bryan’s commitment to germplasm conservation is evident in his numerous awards and honours including the Order of Canada. Bryan Harvey lives in Saskatoon, SK and was nominated by the Canadian Seed Growers Association.

A dedicated public servant, Douglas Hedley led a distinguished career with Agriculture and Agri-Food Canada and is a foremost expert on Canadian agricultural policy. He was involved in every major policy decision the federal government made in the agri-food sector from the late 1980s until his retirement as Assistant Deputy Minister – Programs Branch in 2004. Douglas was instrumental in working with the provinces and agricultural industry groups to set policy that built five-year funded programs that began as the Agricultural Policy Framework, then Growing Forward I and II, and the current Canadian Agri-Food Partnership. After retirement, Douglas served as executive director of the Association of Canadian Faculties of Agriculture and Veterinary Medicine, now known as the Deans Council – Agriculture, Food & Veterinary Medicine (AFVM), at a key time in the organization’s development. Douglas Hedley lives in Nepean, ON and was nominated by the Deans Council AFVM.

Due to the COVID-19 pandemic, this year’s induction ceremony scheduled for Toronto in November has been cancelled. The four agricultural leaders will be formally recognized at the 2021 event.

The Canadian Agricultural Hall of Fame Association (CAHFA) honours and celebrates Canadians for outstanding contributions to the agriculture and food industry. Portraits are on display in the Canadian Agricultural Hall of Fame Gallery located at the Royal Agricultural Winter Fair. The CAHFA also publicizes the importance of inductee achievements to Canada. The Association was organized in 1960 and is administered by 12 volunteer Board of Directors residing in regions across Canada. www.cahfa.com