Orius insidiosus plays a vital role in controlling pests on greenhouse crops as well as home gardens. It’s also compatible with other specialist and generalist predators. 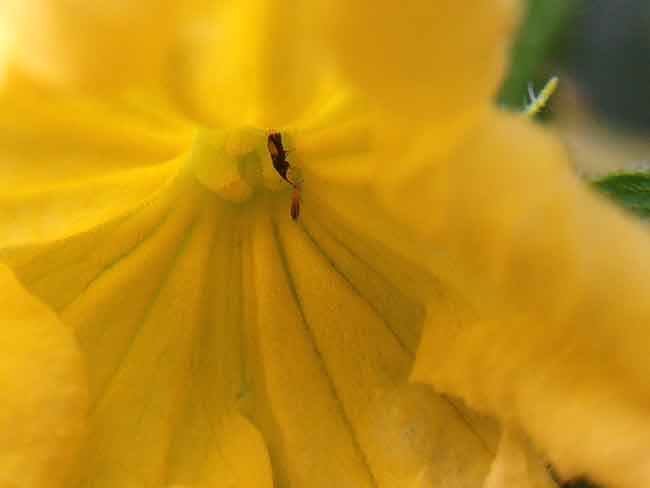 Orius insidiosus, also called Flower Bug or Minute Pirate Bug, is a local species of the United States and Canada. Most North American farmers are well aware of the importance and effectiveness of this species. Orius plays a vital role in controlling insect and mite pests on greenhouse crops as well as home gardens. Moreover, this bug is well known for its compatibility to work with other specialist and generalist predators.

Both sexes of Orius appear very similar (shiny black, brown and white), but adult males are slightly smaller than females and are about a tenth of an inch (2 mm) in length. The Orius are yellow at younger stages and become dark brown at later stages.

All life stages of Orius feed on insects and mite pests. It also appears to feed on plant juices to some extent; however, it is mainly fond of juices of various insects such as thrips, spider mites, aphids, whiteflies and moth eggs and small larvae. To feed, the Orius spears its prey with a long needle-like beak and sucks out the body juice of its victim.

In one day both immature and adult bugs can consume 30-plus spider mites, 12-plus thrips, 10-plus aphids, or 15-plus whiteflies.

Even though Orius has been observed to leave its prey before having completely consumed it to attack another one, the first prey is incapacitated and so more prey may be destroyed than those needed to fulfill its basic nutritional requirements.

Orius insidiosus is a diapausing insect, becoming inactive during the shorter and cooler days of the year. This behaviour makes its use restricted to about March-September/October. The diapause can be tricked by putting 60-Watt blue spectrum white fluorescent lights at 60-foot radii and by maintaining the temperature at 18 C to 20 C. If its specific temperature requirements are not fulfilled, Orius introductions during the late fall or winter will not be effective.

The new trend of using supplemental lighting and maintaining warm temperatures may aid in the establishment of this predatory species during the winter months.

Orius insidiosus is usually sold as adults (500 to 1,000) in small plastic bottles with a carrier like buckwheat hulls, which allow the Orius individuals to avoid each other and, thus, minimizes cannibalism while in transit. Furthermore, this predator can be easily distributed manually throughout the crop and spread faster than any other beneficial insect because of its high mobility and good searching ability.

The recommended introduction rates of Orius are usually 2 to 5/m2 depending on the crop and pest pressure.

Ornamental peppers are used by some growers as banker plants, providing food (pollen) and oviposition sites to build up populations of Orius in the absence of thrips.

Also, there has been an increasing number of studies evaluating the use of supplemental food sources for the Orius. These include loose applications of pollen, flour moth (Ephestia) eggs, and cysts of brine shrimp (Artemia). These alternative food sources are used to assist in the establishment of Orius in the absence of thrips, and more interestingly, they have shown considerable potential for commercial use.

Supply of fresh, not stored, and locally produced beneficial insects can change the effectiveness of integrated pest management (IPM) especially for protected crops. Farmers must ask for the locally produced fresh and high quality predators to manage insects and mite pests on their crops. Also, diversified cropping systems, use of microbial insecticides, and use of monitoring tools to minimize insecticide applications are all practical recommendations to maximize the natural biological control from Orius.

Dr. Abida Nasreen is director of research and development with GrowLiv Ltd.  www.growliv.com.

Related
THE GROWING SUCCESS OF ORGANOPONICOS
Starting a biocontrol program?
U of G using math to study bees
Grower Notes in fourth decade of extension work