No other sector of the gardening industry has been the brunt of more
jokes than garden accents. Whether it’s the kitsch of pink flamingos,
garden gnomes or a tasteful and heated birdbath, outdoor accents truly
communicate the personality of the gardener. 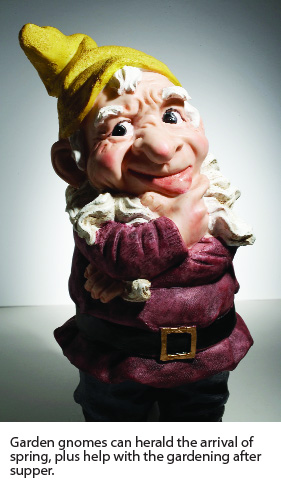 No other sector of the gardening industry has been the brunt of more jokes than garden accents. Whether it’s the kitsch of pink flamingos, garden gnomes or a tasteful and heated birdbath, outdoor accents truly communicate the personality of the gardener. They are the horticultural equivalent to a great handbag and shoes.

The accessories can make or break the outfit…or the garden. What is interesting to note is that garden accents are quite popular with consumers again, and it begs the question “what’s the new millennium pink flamingo?”

Don Featherstone created pink flamingos in 1957 in order to inject a touch of the tropics into our living space. The young sculptor used pictures from National Geographic to make the lawn ornaments as lifelike as possible. Originally tapping into a wave of “Florida Fever” that swept the continent, plastic flamingos now function as kind of botanical court jester showing up en masse on the front lawn for Uncle Harry’s 50th birthday party.

Robert Thompson of Syracuse University is a pop culture commentator and he is quoted as saying; “There are two pillars of cheesy, campiness in the American pantheon. One is the velvet Elvis. The other is the pink flamingo.”

Garden gnomes have a much longer history, and were originally created in Germany in the mid-1800s. These accents were based on local myths about the gnomes’ willingness to help in the garden at night.

Today, garden gnomes are somewhat of a subculture for Internet pranks. People have been known to return garden gnomes “to the wild,” promoting groups with names like “Front de Liberation des Nains de Jardins” (France), and “MALAG,” (the Garden Gnome Liberation Front from Italy. Garden gnomes have also been sent on trips around the world as part of the travelling gnome prank which became the basis for Travelocity’s “Roaming Gnome” campaign.

Flamingos, gnomes, Sylvester the Cat, the lady bending over to garden with her bloomers showing…the list is endless. Garden accents seem to be the fastest way of becoming a neighbourhood joke – or are they?

There is a new breed of garden accent in town. Whimsical, not cheesey. Subtle, not overt, and they are made of natural materials that blend with the garden. These little works of art just may be the key to igniting your customers’ imaginations but we have to be careful not to paint all accents with the same fluorescent brush. Is our industry still wincing when we think of garden accents? Are we missing an opportunity because we have “flamingoitis”?

Today’s garden accents are much more likely to take their cues from historical architecture than from cartoons. Mark Vaughan of  Manotick Stone and Garden in Manotick, Ont., points out that gargoyles have a rich tradition as part of our landscaping initiatives. “Gargoyles were incorporated into buildings to ward off evil spirits. They truly represent that juncture between paganism and Christianity.”

His point is well taken. Many people see their gardens as spiritual places so this mystical aspect that today’s garden accents capture so beautifully provides a huge opportunity for the contemporary garden centre.

Zen gardens accented with smiling Buddhas will appeal to those consumers who follow an Eastern sense of spitituality. Koi ponds, waterfalls and wind chimes all have meaning for those who follow Feng Shui. “Consumers express a lot of interest in our stone Buddhas as well as our Easter Island statues,” reports Vaughan. “It’s their way of incorporating a sense of the mystical into their living space.”

As our love for animals continues to grow, bird baths and houses go from afterthoughts to architectural statements. Birdwatching is big business. According to The Varsity online, more than two million Canadians are actively engaged in feeding and watching birds. Oddly enough, our attraction to birds may also have a spiritual aspect.  These creatures are beautiful and full of colour. They defy gravity at will. They go wherever they want, whenever they choose. They are often exotic, and yet they are right in our backyards for us to enjoy.

Birdhouses fashioned after historical mansions and heated birdbaths are just two ways that we pamper our feathered friends. If we cannot afford to live in the house of our dreams ourselves then we might as well build a smaller version for our animal friends. Clearly, garden accents are tangible expressions of our fantasy lives. Just how does the garden centre leverage this aspect to help generate sales?

“The key to making garden accents a success in the horticultural centre is to create effective merchandising,” confirms Vaughan. “That gargoyle perched upon a stone fence in an effective display will spark the consumer’s imagination. They’ll see the fence and all of the other elements around it as a story. With the popularity of movies like Harry Potter and Lord of the Rings, these mystical themes are top of mind.”

It is important for garden centres to work with their garden accent vendors to get the “story behind” the accent. Signage beside that gargoyle lets the consumer know that gargoyles ward off negative spirits, or notes that Easter Island statues were repositories of sacred spirits will add to the romance of the product.

Your plants, shrubs and trees included in these displays will become part of the “story” and the consumer will be able to envision how it might look in their own yard. Knowing just how to price these items can be a challenge as well.

“Garden accents should be looked at strategically in terms of retail pricing,” says Vaughan. “Perhaps a 100 per cent mark up will make the retail price too high for the consumer, but taking a lower margin on the garden accent will make it palatable to the customer and drive sales of other horticultural products commanding higher margins.”

Canadians are hungry for more living space. The average square footage of a home today resides around 2,000 compared to 1,075 square feet in 1975. In our quest to stake out more living space, it is natural that we would start to “think outside of the box house.” Smaller back yards are considered outdoor rooms, and consumers are decorating them as if they were rooms inside of the house.

The great outdoors is more wild and exotic than indoors, even if it is in suburbia. This translates into accents that reflect the awe and curiosity that we feel for nature. Those 19th-century garden gnomes tapped into the very same mystical perspective that garden accents still target today. Whimsical? Yes. Provocative? Perhaps. Maybe there is just no place like gnome.