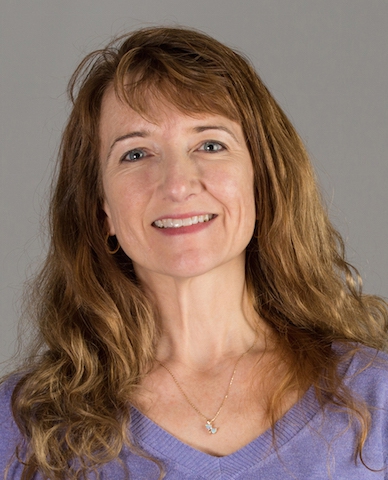 Laura Bohn is a professor at the Florida campus of The Scripps Research Institute. SCRIPPS RESEARCH INSTITUTE

Oct. 23, 2016, Jupiter, FL – In a discovery that advances the understanding of how marijuana works in the human body, an international group of scientists, including those from the Florida campus of The Scripps Research Institute (TSRI), have for the first time created a three-dimensional atomic-level image of the molecular structure activated by tetrahydrocannabinol (THC), the active chemical in marijuana.

The new insights into the human cannabinoid receptor 1 (CB1) will provide an essential tool for understanding why some molecules related to THC have unexpectedly complex and sometimes harmful effects. The findings also have the potential to guide drug design for pain, inflammation, obesity, fibrosis and other indications.

THE CHALLENGE TO PRODUCE A CRYSTAL FORM

At the beginning of the study, the team struggled to produce a crystal form – needed to obtain data to recreate the high-resolution structure – of the receptor bound with AM6538, a stabilizing a molecule that blocks the receptor’s action.

“The CB1 receptor proved as challenging for crystallization as it did for understanding its functional regulation and signaling,” said Bohn, who is a professor in TSRI’s department of molecular therapeutics.

When the scientists succeeded in crystalizing the receptor and collecting the data, the structure of the cannabinoid receptor complex revealed an expansive and complicated binding pocket network consisting of multiple sub-pockets and channels to various regions of the receptor.

Cannabinoid receptors are part of a large class of receptors known as G protein-coupled receptors (GPCR), which account for about 40 per cent of all prescription pharmaceuticals on the market and play key roles in many physiological functions. When an outside substance binds to a GPCR, it activates a G protein inside the cell to release components and create a specific cellular response.
AM6538, is an antagonist/inverse agonist that binds tightly to the receptor; it has a long half-life, making it potentially useful as a treatment of addiction disorders.

“As marijuana continues to become more common in society, it is critical that we understand how it works in the human body,” said Liu, who is professor and deputy director of the iHuman Institute of Shanghai Tech and is also affiliated with the Chinese Academy of Sciences.

The first author of the Cell study, “Crystal Structure of the Human Cannabinoid Receptor CB1,” is Tian Hua of Shanghai Tech University and the Chinese Academy of Sciences (Beijing).

The Scripps Research Institute (TSRI) is one of the world’s largest independent, not-for-profit organizations focusing on research in the biomedical sciences.

TSRI is internationally recognized for its contributions to science and health, including its role in laying the foundation for new treatments for cancer, rheumatoid arthritis, hemophilia, and other diseases.

An institution that evolved from the Scripps Metabolic Clinic founded by philanthropist Ellen Browning Scripps in 1924, the institute now employs more than 2,500 people on its campuses in La Jolla, CA, and Jupiter, FL, where its renowned scientists – including two Nobel laureates and 20 members of the National Academy of Science, Engineering or Medicine – work toward their next discoveries. The institute’s graduate program, which awards PhD degrees in biology and chemistry, ranks among the top ten of its kind in the nation.