Beverly Greenhouses has been growing vegetables since 1960. 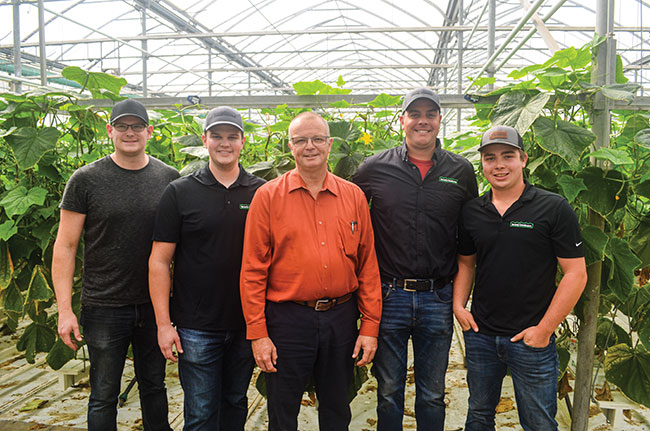 The Vander Hout family has been feeding Ontario residents for more than 60 years.

When Jan Vander Hout (Sr.) started up Beverly Greenhouses in 1960, he started with a 1/4-acre of greenhouse space where he grew tomatoes; in addition to some outdoor crops. In 1968, he built a one-acre greenhouse, and added another 1/3-acre the following year. Throughout the 1970s, Beverly’s Greenhouse’s growth became constrained due to lack of available land, but the Waterdown, Ont.-based grower did make a major change to its operations during that decade. In 1978, the company decided to focus on growing English cucumbers exclusively, and for the past 44 years that aspect of the operation hasn’t changed.

In 1984, Jan and his son, Marshall Vander Hout, purchased additional land and expanded the greenhouse operation further. The company has undergone several expansions since that time, with a major expansion in 1996, and further expansions in 2005, 2006, 2012 and 2017 (which included building their own propagation houses). The greenhouse operation’s total acreage now stands at 30 acres with two acres committed to propagation.

Jan (Jr.) says the decision to significantly expand the operation while continuing to focus on the cucumber market came from wanting to take advantage of economy of scale.

“This maximizes the use of our automated packaging line. Focusing on one crop maximizes our production potential,” he says.

Beverly Greenhouses does not sell direct to stores. It partners with Bayshore Vegetable Shippers in the Burlington, Ont. area that sells their cucumbers to major retailers such as Loblaws, Metro, Sobeys, Costco, and some American retailers south of the border. 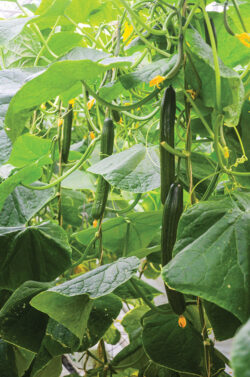 In 1978, the company decided to focus on growing English cucumbers exclusively, and for the past 44 years that aspect of the operation hasn’t changed.

Automating operations
In the fall of 2013, the company jumped further into the world of automation. They invested heavily in an automated packaging line for its packing house.

“We’re always looking for ways to automate because we want Beverly Greenhouses to be a great place to work and to reduce labour demand especially in our busiest times,”
Jan adds.

The company has also invested in software to automate various aspects of their water systems and climate control. Dale says the push for increased automation will be faster than ever moving forward.

“With all the A.I. and sensors coming in, I think there will be more change in the next 10 years than in the last 10 years. Robotics is coming in hot,” he says.

“I think there’s a lot of drive for automation for picking and de-leafing as well,” Jan adds.

The labour shortages generated due to travel restrictions during the COVID-19 coronavirus pandemic have played a key role in the push for automation.

“It really showed the labour vulnerability in this sector,” Jan says, adding that people will never be completely replaced. “There’s always going to be labour. You’re never going to be without it.”

Beverly Greenhouses uses a bioreactor to generate a healthier water environment through encouragement of positive microbial activity, Jan explains, adding that the water creates a very positive microbial push ln the root zone. “Using the Bio-reactor we’ve created an environment where the benificial organisms take out the detrimental ones.”

In addition to creating a healthier root zone, Jan says there are the immeasurable advantages of a more wholesome tasting fruit due to the natural biome in the irrigation water.

“We really think recirculating water through the biofilter is the best way to attain optimal environmental performance,” Jan says.

Virus management
While Beverly Greenhouses has the advantage of being in a relatively secluded location, away from other greenhouse operations, the company takes virus management very seriously.

“Between crops we deal with viruses as if they were already here,” Jan says. “Every time the greenhouses are cleared out and sanitized to prepare for the next set of crops, growing media is replaced for the incoming plants to reduce the chance of cross-contamination.”

Dale says their operation has a stringent set of procedures in place for sanitization of the greenhouse. He adds that Beverly Greenhouses has been fairly fortunate over the years in terms of outbreaks of destructive viruses like the cucumber green mottle mosaic virus, which has been a significant problem for some operations in Ontario.

“We’ve never dealt with it here,” he says.

“We can’t get it from another farm through propagation because we propagate our own,” Jan adds.

That said, no set of procedures is 100-per-cent guaranteed to prevent a virus from entering a greenhouse, Jan acknowledges.

“We’re pretty isolated here, but contractors come in here to fix the plumbing, electrical and other things, and they could bring it in from another greenhouse,” he says.

Dale says the industry has learned to adapt to the cucumber green mottle mosaic virus over time.

“I think the industry has learned how to grow with it,” he says. 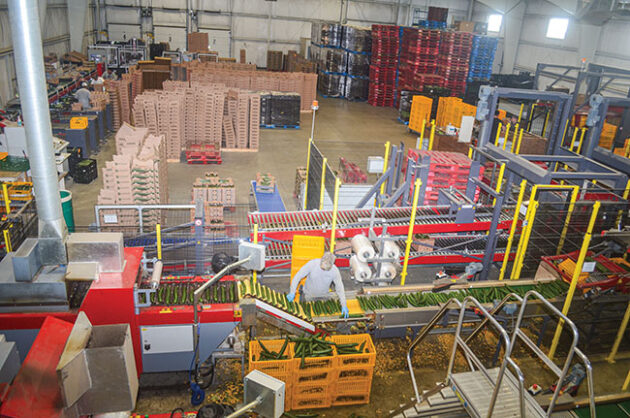 The labour shortages generated due to travel restrictions during the COVID-19 coronavirus pandemic have played a key role in the push for automation in many greenhouse operations.

Cost challenges
Nothing in the world right now is getting cheaper, and that includes the products needed to run greenhouse operations.

“Right now, cardboard is up 42 per cent. Anything plastic is up 50 per cent, and natural gas is double for those who have not hedged,” Jan says. “Increased costs of inputs in the short-term need to be passed on to the consumer.”

For the cardboard needed for packaging the cucumbers, there are limited alternatives.

“We have looked at ways to see how we can make our boxes less expensive, like reducing the paper weight, but there’s only so much you can do,” Jan says.

Energy costs are another big concern for many greenhouse operations throughout Ontario.

“If you’ve got a lit greenhouse, electricity prices are a big concern,” Jan says. “Natural gas has gone up a lot in the last couple of months.”

One of the ways Beverly Greenhouses reduces its costs is through burning waste wood in its boiler system to generate heat.

“We basically make half of our own hydro while using all the waste heat from the generators, and much of our greenhouse heat comes from waste wood. We’ve been doing that since the 1980s,” Dale says.

The greenhouse has two co-gen plants on site for producing electricity.

“Our generation cost is lower than we would pay to Hydro One,” Jan says.

Market value for cucumbers hasn’t kept up with increased operating expenses, so finding ways to improve efficiencies and cut costs is vital.

“Over the last couple of years, we’ve found these little efficiencies,” Jan says. “Cucumber prices have not gone up in price to keep pace with inflation, not by a long shot.” 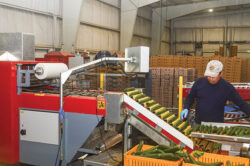 Market value for cucumbers hasn’t kept up with increased operating expenses, so finding ways to improve efficiencies and cut costs is vital.

Just as Marshall learned the family business from his father, Dale and Jan learned how to run the operation over time from their father. The two sons are confident that some of their children (David, Daniel and Adam Vander Hout) will be able to take over the family business over time, making Beverly Greenhouses a fourth-generation family business.

Jan says finding ways to organically transfer the various responsibilities of the business to different family members can be difficult.

“We haven’t arrived there yet, and in fact, you never actually get there, there is always the next step. It’s a challenge. How do you make it fair for everyone and not create any problems with the company? Mitigate taxes?  Make it affordable for the next Gen? We’ve got to give credit to our grandfather and our father,” he says.

When it comes to favorite aspects of running the business, Dale says he enjoys the variety that comes with managing greenhouse operations.

“I like the combination of working with people, equipment, working outside and working with plants. You get to do a bit of everything,” he says.

“I like that we’re growing food, something that’s fundamental for human consumption,” he says. “I also do a bunch of volunteering on boards of agricultural associations; I really enjoy interacting with other farmers and government.”

When it comes to future plans for Beverly Greenhouses, Jan says the business will continue to focus on finding ways to optimize operations.

“We will continue to look for opportunities to improve overall efficiencies,” Jan says.

“We’ll continue to find things to naturally integrate into the business,” Dale adds.