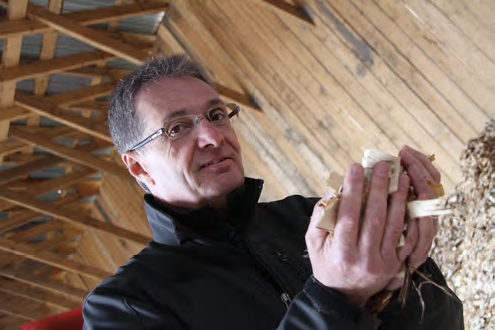 The goal was to document and evaluate the implementation of a wood biomass heating system on a small- to medium-size farm, where other producers could go to obtain hands-on information.

Three years down the road, the Vitrine biomasse (Biomass Showcase) project is revealing the true nature of an industry that has barely started to tap into Quebec’s endless supply of wood biomass.

Harvesting both wood and greenhouse vegetables is what Luc Verrier has been doing for most of his career. At Les Serres Verrier, forestry and agriculture go hand in hand. And now that biomass is the new buzzword in the greenhouse industry, Verrier may be the company others look to for an inspiring business model.

A final report on the project was filed to the Bureau de l’efficacit et de l’innovation nerg tiques (provincial energy efficiency agency) last March. Canadian Biomass magazine met with Verrier and forestry engineer Jean Gobeil, who managed the project, to find out about the lessons learned and to reflect on the current state of biomass use in Quebec’s greenhouse industry. The monitoring and tweaking of the boiler is still ongoing and the first harvest of fast-growing willows will only occur this coming fall, but the project is already providing useful insight for other growers.

Verrier operates 12 greenhouses totalling 2,500 m2 north of Drummondville. He grows tomatoes, cucumbers and lettuce year-round. The produce is sold in supermarkets within a 40-kilometre radius. 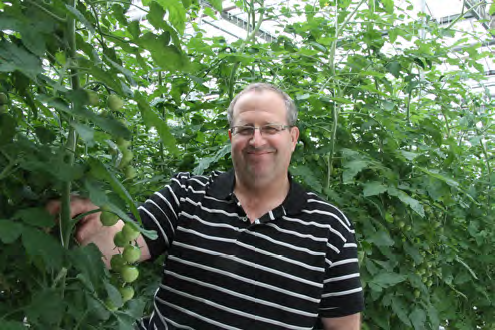 “I have always heated with wood (logs), but I could never measure anything,” Verrier says. Now, everything about his heating system is being measured: the quantity of wood chips, their humidity level, as well as the efficiency of the boiler, hot water storage tank and hot water distribution network. His 550-kilowatt boiler is from Quebec manufacturer Transfab nergie. It can burn chips with up to 35% humidity.

Being able to use wet biomass in such a small system is one of the two innovative features of this project. The other is the planting of 20 hectares of fast-growing willows, in order to secure biomass self-sufficiency. With the first harvest yet to come, only a few tests with purchased willow chips (see below) were conducted.

Harvesting 10 hectares per year could provide Verrier with 50% of his energy needs. “We still need to measure the plantation’s yield, its heating power and to what extent the chips need to be dried,” Gobeil says.

Planting willows for biomass would make more business sense in areas where corn and soybean can’t be grown, Verrier reckons. Willows could also be planted and harvested on buffer strips along streams and rivers or in areas where the soil needs to be decontaminated, he suggests.  (An image of Verrier’s willow piles is below.)

The greatest advantage of growing part of your boiler’s feedstock is not having to depend on only one source of biomass, Verrier says. The prices of all types of fuel tend to vary over time and the same could happen with wood chips. Verrier currently harvests his own wood by thinning the Forêt Drummond, a public plantation only kilometres away from the farm.

Wood biomass may be one of Quebec’s most important untapped sources of energy. The Ministry of Natural Resources (MNRF) has estimated that 8 million m2 of residual wood biomass could be collected annually from the province’s forests. Currently, less than 10% of trees or parts of trees with no commercial value are used as fuel.

According to Gobeil, there are countless acres of forest across the province that need to be cleaned, should we want them to yield quality lumber. A lot of abandoned farmland that was reforested in the 1970s is ripe for thinning. “The only use for that type of wood is biomass for energy production,” Gobeil says. “Just by taking care of these forests, we have years and years of supply.”

New business models will need to be invented if we are to collect this biomass, he adds. Things will need to be done on a smaller scale, with a lot less long-distance hauling than what we currently see in the lumber industry. “If in Europe, they are able to do it and to make money, we should also be able here.”

Perhaps biomass users will be the ones taking charge of biomass harvesting. This has been Verrier’s way of life for years.

His greenhouse complex sits next to what looks like a lumber operation. The piles of round lumber come in part from trees he cuts on private lots, leaving them clean for replanting, or in better condition for the best trees to grow better. Harvesting biomass like this becomes a service to landowners.

The wood biomass sector in Quebec is still in its infancy and this was reflected in the Vitrine biomasse project. While there is ample supply of biomass, there remains a great lack of expertise among boiler manufacturers and other equipment suppliers.

Boiler manufacturers can only provide clients with an approximation of their products’ performance and efficiency, Gobeil notes. In the case of Verrier’s boiler, it appears to be more powerful than the 550 kilowatts it was expected to deliver. Considering that a boiler’s efficiency is at its best when heating at its highest capacity, Verrier’s boiler may actually be too big for his 2,500 m2 of greenhouse. “It is essential that boiler manufacturers be able to certify properly their products regarding energy output and environmental regulations,” Gobeil says.

There also seems to be an absence of expertise in Quebec about hot water distribution networks and hot water storage. To this day, Verrier’s tank does not work properly. “Storing hot water is meant as a buffer that allows you to have a much smaller boiler,” Gobeil says. “The system has to be well configured. It’s not as simple as one could think.”

In other words: unless they purchase technology from far away, Quebec growers are not able to get precise and proven information about the performance and optimal configuration of a biomass heating system. In Europe, manufacturers provide extensive data about their boilers and also offer quality follow-up service once installed, adds Gobeil.

Despite his system still needing significant adjustments, Verrier is a happy farmer. “Heating with wood biomass requires a lot more involvement than heating with natural gas,” he says. But for him, handling wood with his farm machinery and feeding it into his chipper is the fun part of the day.

As part of the Vitrine biomasse project, Les Serres Verrier remains open to visitors, from both forestry and greenhouse sectors. Two fact sheets have been printed on implementing a biomass heating system for a greenhouse farm and on the types of wood biomass and their advantages. Two more fact sheets are in the works: one on technical aspects of biomass heating and the other on financial considerations.

So far, the Vitrine biomasse has inspired five new projects, four of which are waiting for public funding from the BEI. The agency’s budget has run out and the next available funds will come in 2013.

For greenhouse growers, a biomass heating system must pay for itself within three years, Gobeil says. Without subsidies, this cannot be achieved. “There is plenty of interest from growers and the programs can’t keep up.”

Last February, Quebec greenhouse farmers awarded forestry engineer Jean Gobeil with the Mritas Rolland-Harnois for “showing faith in the development of (local) greenhouse production and believing in the potential of our businesses and their work force.”
Jean Gobeil has been involved in several greenhouse biomass conversions. Last year, he advised Quebec’s most important propagator, Sylvain Lefort, in an $ 8-million project to heat 6.5 hectares of greenhouses using two six-megawatt boilers.