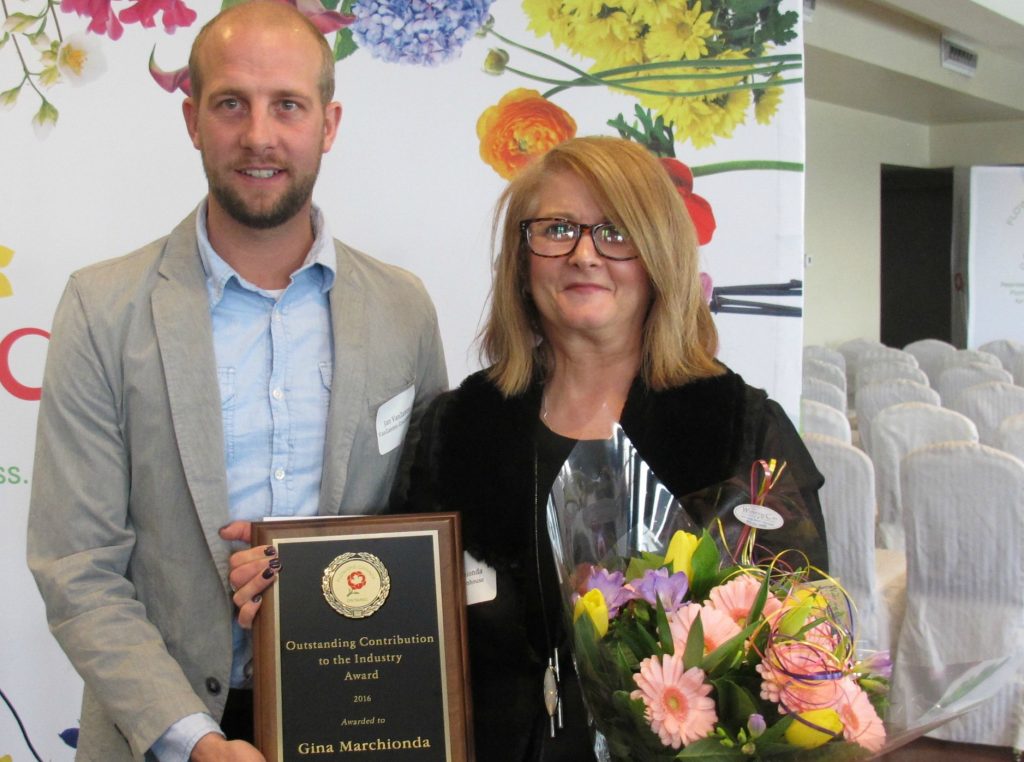 Jan. 18, 2017, Jordan, Ont. – A long-time volunteer has received this year’s Outstanding Contribution to the Industry Award from Flowers Canada Ontario.

In accepting the award, she paid tribute to her employer for their support of her work in the association.

“My years of service would not have been possible without the full support and encouragement of my employer, the Jeffery family.

“Since FCO’s inception, the Jeffery family has supported the work of the association both financially and through participation, encouraging each of its employees and management to participate in the projects and activities led by the association.

“The family understands, as I do, that there is strength in numbers when dealing with issues that are common to us all and that a strong and engaged association contributes to the success of each of its members, small and large alike.”

Marchionda was first elected to the FCO board in 2007 to take on the role of treasurer and has been re-elected to that post in succeeding elections since then.

“FCO has benefited greatly from Gina’s enthusiastic personality and financial skills,” said board vice-chair Jan Van Zanten of Van Zanten Greenhouses in presenting her with the award.

“But her passion and understanding for small, family run businesses has been an even greater asset to the successes of the past 10 years at FCO.”

Marchionda has helped steer the FCO through some of its biggest challenges in recent years.

Back in 2007 when she was first elected to the board, FCO had just submitted its application to the Farm Products Marketing Commission to achieve status under Section 12 to require all flower growers in Ontario to be paid members of the association. Marchionda jumped in right away and helped the board in its outreach to growers. She participated in all the meetings and actively spoke up for the value of FCO membership.

Marchionda has served for many years on a variety of committees for FCO and Flowers Canada Growers. She continues to represent flower growers on:

•    The management committee for GreenCHIP-Q. This is a quarantine fund now being developed jointly with an insurer and broker to provide coverage to floriculture growers in the event of financial losses due to a quarantine event. It is being designed by growers for growers to fill a gap unique to the floriculture sector.

Marchionda has worked for Jeffery’s Greenhouses as its financial controller since 2001. Prior to that she articled with KPMG and then worked for private industry in manufacturing and transportation companies.

“Gina feels very comfortable in the family oriented business atmosphere, as she herself was raised in the same environment,” said Van Zanten. “She has commented that she has never seen such an industry as the one she is in now. There are few other sectors where everyone is so willing to get together and talk things out, or where companies are willing to work together to get something that benefits everyone.”

In addition to her work in the industry, Marchionda is also involved in the community. Since 2010, she and her father, now 83, have participated in the Big Move Cancer Ride to support Niagara’s Walker Family Cancer Centre.

“A quick look on their website shows Gina’s name on the list of top fundraisers for the 2016 event,” said Van Zanten.