It’s a philosophy he’s lived by throughout his 26-year career at Canada’s leading agriculture lender.

“My big thing is to make a difference,” Stewart says. “And I’ve had the chance to do more here than I could have done anywhere else, so it has been a great ride.” 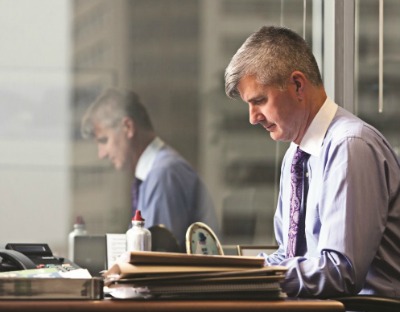 He’s been CEO since 2007, but Stewart began his career in 1988 as a credit advisor in Manitoba, where initially much of his time was spent working with customers on the verge of bankruptcy.

“People were in a bad position in the late ’80s and early ’90s, but it didn’t mean they weren’t good producers – they were just in a tough spot. Many of them had the ability to pull through it, and are super successful today,” Stewart says.

“If you take the time to care, to be interested and curious, and to still believe in people when they’re down, then you usually have a chance to build a good relationship.”

As he prepares to retire from FCC this July, Stewart reflects on the valuable insights he’s gained while advancing the business of agriculture.

During his career, FCC has grown its lending portfolio from $3.5 billion to more than $26 billion today, alongside a growing, diverse and now promising agriculture industry.

Stewart tells the story of one prospective customer who wouldn’t provide a clear picture of his financial situation. It was understandable since the financial institution he was working with wasn’t very happy with him at the time.

“He wouldn’t tell anyone anything,” Stewart recalls. “I went to talk to him and got to know him. I could see he was a smart business guy – he was awesome.

Stewart eventually made a loan that kept the producer in business and enabled him to grow into one of the most successful producers in Manitoba.

A few years later, that same customer drove three hours to Regina to personally thank Stewart for being there when he needed him.

MAKING A DIFFERENCE IN COMMUNITIES

A strong believer in the power of relationships, Stewart’s goal has been to put FCC’s 1,700 employees in a position to make a difference in people’s lives, whether it’s through individual business relationships or various corporate social initiatives, such as FCC Drive Away Hunger and Habitat for Humanity.

“When you use the characteristics and qualities that you possess to help someone, that’s when you really matter,” he says. “My goal as CEO – and any of the other roles I’ve had here – has been to try and put all of us at FCC in a position to be that person.”

Stewart’s childhood dream was to become a farmer, but a combination of circumstances prevented him from realizing that ambition. However, he is grateful that he has been able to play a significant role in supporting Canada’s growing and dynamic agriculture industry.

At 53, he also has some thoughts about how the industry can take more control over its destiny, securing a brighter future for everyone involved.

“Agriculture has been very good to me and has so much to be proud of. But with success comes the responsibility to speak up about the positive contribution this industry makes to our economy and our country,” says Stewart, who helped create and is very proud of Agriculture More Than Ever, an FCC-led cause that encourages people working in agriculture to speak positively about their industry.

“You have to be driving the bus, and that means you’ve got to stand up, be honest and stick up for yourself and your industry. We all have an obligation to give back.”

Stewart plans to continue his participation on the national boards for Food Banks Canada and Habitat for Humanity, as well as his involvement in Habitat for Humanity’s Global Village initiative. And, after speaking with him, you just know that he’ll continue to make a difference.