Food accessibility has long been an issue in more remote regions of Canada. This northern initiative puts new indoor farming technology to good use in the OCN community.

July 2, 2019  By Q&A with Joan Niquanicappo and Stephanie Cook of OCN Smart Farm 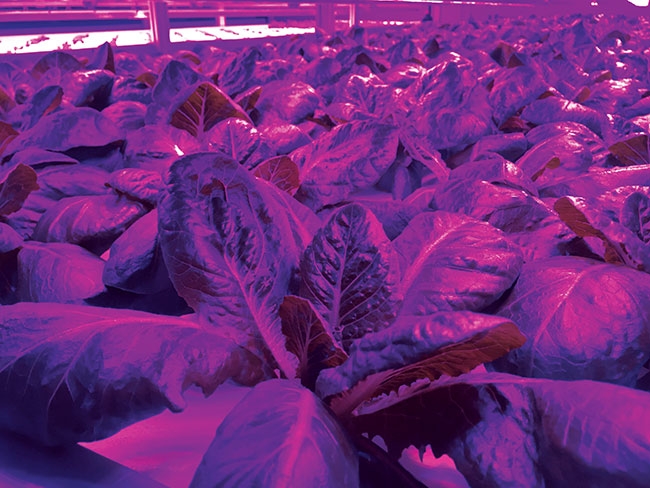 Since the first seeds were planted in 2016, members say the OCN Smart Farm has successfully grown over 70 different varieties of vegetables, flowers and fruits.

For the Opaskwayak Cree Nation (OCN) in northern Manitoba, new smart farming technology is improving their access to fresh, healthy food in a big way.

Presented at the Canadian Greenhouse Conference (CGC) last fall, operations manager Stephanie Cook and general manager Joan Niquanicappo of the OCN have been heading a vertical farming pilot project that offers affordable, fresh produce to those living in remote regions.

According to the presentation, a study by the Opaskwayak Health Authority showed that close to 50 per cent of the OCN community suffered from diabetes – an alarmingly high rate. In partnering with the University of Manitoba, they hoped to conduct a health research study to explore whether functional produce from the smart farm, along with the right educational resources, could help lead to change in the community – all while ensuring that the farm could be a viable business in its own right.

Partnering with technical specialists from Korea Agriculture System & Technology (KAST), the first seeds were planted on the smart farm in February of 2016. Over 70 different varieties of plants have been successfully grown since.

Following their presentation at the CGC, Greenhouse Canada magazine followed up with Cook and Niquanicappo on their smart farming journey.

Q: What prompted you to begin a vertical farming operation?

Niquanicappo: The concept of a year-round produce growing facility was intriguing. For the OCN to initiate a project of this scope, the ability to produce fresh vegetables – and functional vegetables at that – this was exciting. It was astounding to find that vegetables could help combat chronic illnesses, such as diabetes and its complications. A hydroponic system, utilizing recyclable water, no soil, no pesticides/chemicals, independent of weather, and all using smart technology – the opportunities were endless.

Q: What problems did you enounter during the initial set-up?

Niquanicappo: Beside the initial stage fright, the main problem was to have all the equipment CSA approved. There were growing pains in that short period of time from December 2015 to March 2016, but we were able to overcome them. The logistics of preparing the equipment to Canadian standards was time-consuming, and the cost of utilizing tradespeople was very high. The training of local people to assemble, maintain and operate the smart farm was not a problem, but it was still very new, so there was a bit of uncertainty on our part. We have since successfully grown 70 different types of vegetables, flowers and fruits.

Since the first seeds were planted in 2016, members say the OCN Smart Farm has successfully grown over 70 different varieties of vegetables, flowers and fruits.

Q: How do you control or prevent diseases and insect pests?

Cook: We follow strict sanitation procedures, including Hazard And Critical Control Points (HACCP) developed by KAST and adapted to our Smart Farm for caring for the plants personally and procedurally. We ensure that our Smart Farm is sanitized regularly.

As our Smart Farm operates in our community hall, whenever an event is held, we wait two days before entering the farm. Our pest control consists of natural remedies such as lemon juice with water or vinegar and water to help with arachnids, arthropods, dipterans, aphids and other pests.

Q: How do pricing and freshness compare to imported products?

Cook: When we started selling our produce, it was being distributed to community members who had been coming back for the freshness, so the price remained constant throughout the year. Unlike imported vegetables, our produce is grown locally for freshness, and available all year round.

Q: Since the farm’s inception, how has the community responded?

Cook: The community members cannot wait for each harvest. They welcome the produce with curiosity, both to newly introduced varieties and to common produce such as lettuce and herbs.

Q: What’s next for the smart farm?

Niquanicappo: We will be using the smart farm to combat diabetes. We are going to conduct a research study with community members living with diabetes or pre-existing diabetic conditions. We also want to explore ways in which we can make our operations sustainable through the sale of the smart farm equipment, service and maintenance packages, as well as supply sales.

From members of the OCN Smart Farm: On November 9, 2018, the OCN lost a close and valued colleague, Isaac Jung. Jung was instrumental in forming the relationship between the OCN and KAST, which resulted in the creation of the OCN Smart Farm. Isaac will always be remembered as a true partner of the OCN. He will be missed.

Editor’s note: Responses were edited for length and clarity.