Visitors to the University of Guelph garden trial locations cast their votes. 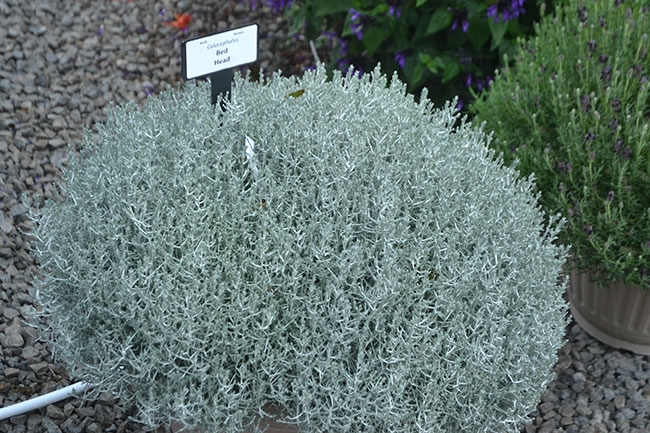 This year’s article reporting on the 2017 trial season will look at both the favourites of visitors to the trial gardens as well as other unique entries that performed very well in the trials at Vineland (containers only), Guelph (containers and ground beds), Milton (ground beds) and the Royal Botanical Gardens (ground beds).

The top 10 favourites as voted by attendees of the open houses at all four garden sites are presented in table format. Plant performance descriptions and garden experiences with some of the “New(er) for 2018” are included as well.

Capsicum ‘Wicked’: This ornamental pepper has a dark green leaf colour and a compact growth habit. The conical fruit starts off dark purple in colour ripening to red. The fruit is highly visible throughout and on top of the plants. It is suited for both container and ground bed uses wherever compact growth is desired. “Blaze” is another ornamental pepper with similar growth characteristics as “Wicked” but its fruit starts off yellow ripening to an orange colour. Both of these cultivars are highly suited for use in fall programs. Source: Ball

Calocephalus brownie ‘Bed Head’: This unusual ornamental has been given common names such as “Cushion Bush” and “Silver Bush.” The creatively evocative cultivar name of “Bed Head” has a very good chance of becoming another common name. It has fine silvery foliage and stems that branch freely to create a ball-shaped plant composed of a network of soft, spikey vegetation. “Bed Head” is grown primarily for its silvery foliage; no bloom was observed throughout the 2017 season. The plant grows well in warm and drier growing conditions but is cool weather tolerant and survived periods of light frost in the 2017 trials. It is suitable for both containers and ground beds. ‘Bed Head’ is also a great choice for planting in beds where potential for irrigation is limited. Selections of “silver bush” have been available from other suppliers in the past but this is reportedly the first cultivar of Calocephalus that is widely propagated from seed. Source: Benary

Cuphea ‘FloriGlory Diana’ (hybrid): This is a new All-America Selections vegetative winner that was judged and found exceptional during the 2017 trial season. The magenta flower colour of the entry was significantly different than the lilac-coloured comparisons; the magenta coloured petals stood out strongly against the lilac coloured comparisons. The entry’s flower size and flower number was significantly larger and greater than the comparisons as well. Source: Westhoff

Helianthus ‘Sunfinity’ (interspecific hybrid): This long blooming annual sunflower has been receiving a lot of well-deserved attention in the gardening media. For the greenhouse grower, Syngenta has exacting guidelines for the proper application of PGRs and pinching to produce highly marketable container plants. (NOTE: Unfortunately the 2017 trial plants received only one PGR application within 48 hours of sowing and were not pinched, potentially changing garden performance/appearance slightly). Once out in the garden these plants grew to an average height of 125 cm and a spread of 90 cm by the end of the season. Removal of the senesced flower heads would have improved the garden appearance of the plant by keeping the focus on fresh blooms. The plants in the trials were not deadheaded and acted as a self-perpetuating bird feeder throughout the summer; they were especially attractive to goldfinches. In a related trial “Sunfinity” was evaluated for cutflower production. On average, each plant produced 12 marketable stems over the course of the growing season with head diameters ranging from four to six cm. Source: Syngenta

Pennisetum glaucum ‘Copper Prince’: This ornamental millet is relatively short and tillers freely to create a very bushy specimen by the end of the season; as many as 12 mature flower/seed heads were counted on one plant during the 2017 trial season. The inflorescences look like upright, dark brown, bushy foxtails. The foliage darkens from light green in the greenhouse to coppery brown in the garden when exposed to full sun. Overall seasons end height of the plant was approximately one metre. The compact habit of this specimen makes it a great choice for containers as well as garden beds. With its wide, corn-like foliage and persistent seed heads, ‘Copper Prince’ would seem to be another potential candidate for the late summer/fall marketing season. Source: Ball

Salvia farinacea x longispicata: The two Salvia farinacea x longispicata cultivars “Mystic Spires Improved” from Ball and “Rockin’ Playin’ the Blues” from Proven Winners had similar garden and container appearance and performance. The heavy bloom production was appreciated by both human and pollinator visitors alike. The drought and light frost tolerance exhibited by these cultivars extended the ornamental and nectar production well into the autumn. Source: Ball and Proven Winners

Zinnia ‘Zany Rose Picotee’: All zinnia entries in the Guelph trials, up to this point, have been propagated from seed. The Zany series from Dümmen Orange was propagated vegetatively. This particular series is a vigorous grower and on the greenhouse bench may require some growth management. Its freely branching habit helps it fill in space in containers as well as the landscape. “Zany Rose Picotee” is covered in small, 5.5-6.5 cm diameter blooms composed of dark pink petals with white tips. This zinnia appears to be resistant to powdery mildew as well. Source: Dümmen Orange.

Rodger Tschanz is a greenhouse technician and sessional lecturer at the University of Guelph. In 2001, he was asked by the Department of Plant Agriculture to create and manage the university’s Ornamental Trial Garden program.