Consumers can’t get enough of ‘what’s new’ in the market. And they’re big on ‘multitasking’ plants. 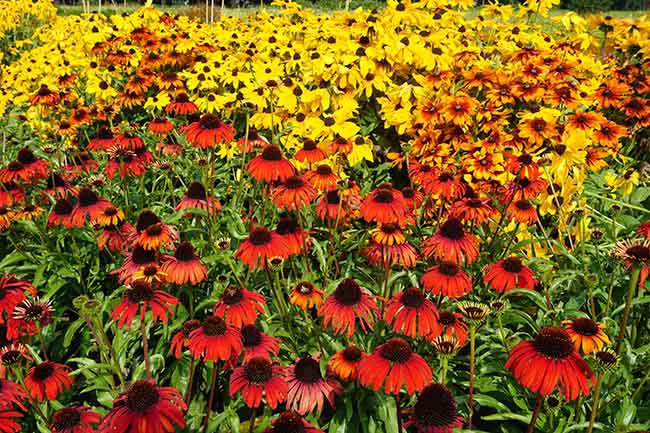 November 2016 – It feels like just a few months since Greenhouse Canada last asked for a “trends” article, but it was actually two years. Time really doesn’t care whether you’re having fun.

Naturally, some things have changed; some, not – like our New! fixation. As Dr. Allan Armitage says, “New plants are the horse under our saddle. When it stops running, so do we.” Amen. Onward.

Chris Hansen, who introduced Sunsparkler® sedum, is teasing the trade with semperv¬ivum ‘Gold Nugget,’ a hitherto-unseen colour. If the pictures are accurate, it’s solid gold for 2017.

Which brings us to another still-growing theme …

… IT COMES AS A SET
Series and collections are In. Terra Nova Nurseries offers six series of heuchera, nine of echinacea, three of kniphofia, two of heucherella, four of sedum, and more. Darrel Probst adds ‘Star Bright’ and ‘Starstruck’ to his excellent Li’l Bang Coreopsis; Darwin welcomes ‘Sky Blue’ and a white to their Moody Blues Veronica line. ‘Peacock’ and ‘Postman’ flutter into the Butterfly™ series of echinacea from AB Cultivars, who enhance their Mariachi™ Helenium series and debut 7 Meadow Mama Echinacea. Bee-You™ is their line of compact, mildew-resistant Monarda with catchy names: ‘Bee-Free,’ ‘Bee-Lieve’ and ‘Bee-Merry.’ Don’t worry, ‘Bee-Happy’ is included.

Monarda ushers in a theme not covered last time …

… POLLINATOR PLANTS
We’re all newly aware of our pollinators’ plight. Gardeners want plants that attract them, and not just pretty ones like Monarchs. This represents a sea change in attitudes. I’ve photographed flowers for decades, shooing away everything but butterflies. Now? I stalk bees, bloom to bloom, camera poised.

Some genera are so familiar, many don’t think of them as natives. Take phlox, especially P. paniculata. Despite Eurocentric monikers like ‘Franz Schubert,’ named in England for a German, every phlox worldwide has American roots.

A cool recent introduction is ‘Violet Pinwheels,’ hybridized from two obscure species by Dr. Jim Ault. Individually, P. bifida and P. kelseyi are nondescript. Together, they’re like Pittsburgh, where the ho-hum Allegheny and Monongahela rivers form the mighty Ohio. It’s longer-flowering than either parent, shorter-growing than P. subulata.

GRASSES
Increasingly, grasses are expected garden elements – and not just in sun.

Festuca: This long-settled genus has grown. To ‘Elijah Blue’ and ‘Boulder Blue,’ add Beyond Blue from Holland and ‘Cool as Ice’ (tops in PA trials) from Intrinsic Perennial Gardens.

Carex looks, grows and sells like a grass, but it’s a sedge. By any name, it’s perfect for small-to-medium finished pots. Which brings us to …

Hardiness isn’t important to some designers seeking a certain look. Whether it comes from annuals, perennials or tropicals is irrelevant. When it stops working, it’s trashed and replaced.

MULTITASKERS
Lloyd Traven of Peace Tree Farm tells of a young employee who scoffed at a plant Lloyd considered beautiful. “What else does it do?” the kid demanded. “Can I eat it, or smoke it? Does it help the environment?”

Millennials, whose attention, money and talents we all crave, think pretty much everything should multitask. Obvious example: the smartphone, a.k.a. Internet portal, gaming device, GPS, audio, video, and oh, yeah … telephone.

Point is, pretty isn’t enough. Let’s tell the rest of our products’ story: plants clean our air, cool our cities, save our rivers and forge vital links in our food chain. THAT’S what else it does.


Related
On the right track to retail success?
Inside View: May 2013
Setting Up Shop
Spicing Up Your Inventory