Knowledgeable staff and healthy plants at reasonable prices are good
starter points for garden centres, but in order for your businesses to
bloom, more is required. Increasingly, customers are seeking and
receiving that little bit extra that entices them to visit. 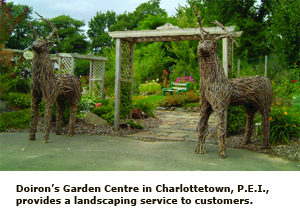 Enhancing the Shopping Experience is Vital in Today’s Marketplace

Knowledgeable staff and healthy plants at reasonable prices are good starter points for garden centres, but in order for your businesses to bloom, more is required. Increasingly, customers are seeking and receiving that little bit extra that entices them to visit.

Keen operators of several Maritime establishments realized this fact several years ago and added elements to their businesses to help increase revenue and make visits even more enjoyable.

Founded in 1988, the family-owned Green Village Garden Centre in Fredericton, N.B., has become a destination for many gardeners across the province. One of the biggest draws to Green Village is their butterfly conservatory. Pupae are imported from Costa Rica and hatching schedules are carefully timed to provide at least 300 butterflies fluttering about the blossoms at any one time from May to the end of August.

“That attracts a lot of people; they really enjoy it,” says Andy Buyting. “It’s a big charge for customers to come in and walk amongst them.” 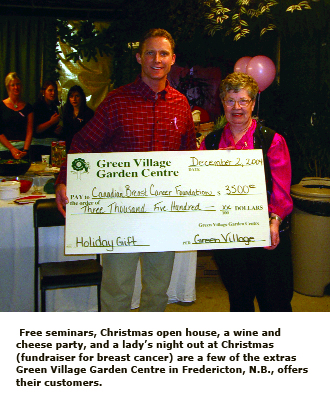 The feature is expensive, with the added inconvenience of having to obtain insect import permits, but Buyting says after discussing its validity, they decided the element was worthwhile and have simply added associated costs to their advertising budget.

Another attractive feature at Green Village is the ice cream parlor in the garden centre.
“We’re the only garden centre I’ve ever seen to have one. We sell a ton of ice cream every year. It really attracts the kids,” says Buyting.

The facility is a full service parlor with hard and soft ice cream, a waffle cone maker, chocolate dip, and hot fudge sundaes. “It provides the whole gamut when it comes to ice cream,” says Buyting.

Other offerings are free seminars, Christmas open house, a wine and cheese party, and a lady’s night out at Christmas (a fundraiser for breast cancer). Customers can also sign up for the quarterly e-mail newsletter and join the frequent buyer club. One reward point is earned for every $1 spent. When 400 reward points are accumulated, a 10 per cent off coupon is presented.

A special service at Green Village is the personalized birthday greeting along with a $5 credit.
Buyting says their business strives to become a major destination and that to culture that image, they’ve been known to do some crazy things around the store.

“Where else can you visit live parrots as well as other birds in our tropical greenhouse year round,” says Buyting.

Darlene den Haan is the former chairperson of the Greenhouse Growers Association of Nova Scotia. Her family owns the seasonally operated den Haan’s Garden World in Middleton, N.S. She says they set their place apart from others by trying to create an ambience and healing place, where customers can come in and de-stress.

“It’s not just a shopping experience, we encourage our customer to come back, even when they’re feeling down, to take advantage of the environment that we’ve created inside the greenhouse,” she says. The atmosphere is enhanced with soothing music and nature sounds. Even the humidity level is carefully monitored for optimum comfort.

In addition to their garden centre, den Haan’s operate a gift shop and hydroponics division.
“I’ve always sort of preached to everyone, know your strengths and work with those. Usually the best-kept secret of your success is something that’s very obvious. For us it was the tomatoes and cucumbers that set us apart from everyone else. We’ve built on that,” says den Haan. 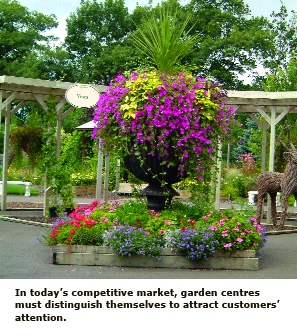 The business grows over a million pounds of tomatoes annually. Eight years ago den Haan began turning excess tomatoes into a value added product – salsa. Bread & butter pickles, jams and jellies were added to the line.

“We’re really expanding on that whole idea of knowing where your food comes from. It’s a value added process to help us capture some of that waste but its not just about capturing waste. We’ve created a little following, like a farmers market. It’s happening seven days a week,” says den Haan.

She’s the one who blends the fruit and vegetables they grow with secret ingredients on a propane cooker set up outside in her yard. That way she maintains complete control over production.

“It’s quite an experience and its fun,” she says. Each year she bottles over 1,000 quarts of salsa and half that in pickles. She says she could sell twice as many, but the product will never be offered wholesale. “It’s a niche and I’d sort of like to keep it that way.”

In Charlottetown, Prince Edward Island, Wade Doiron, owner of Doiron’s Garden Centre, says it’s the dual nature of their business that attracts people. His company provides a landscaping service and stocks the majority of plants they use for installation, at their garden centre.

“With the amount of stuff we have on hand, customers find it quite helpful,” he says.

Staff are able to recommend specific plants for various purposes and can refer customers to completed landscape projects in the area for an idea of what mature growth habits look like.
Creative enhancements to entice customers can be accomplished in many different ways as shown by these businesses. In some cases, as den Haan advises, it’s simply a matter of knowing your strengths and expanding on those.