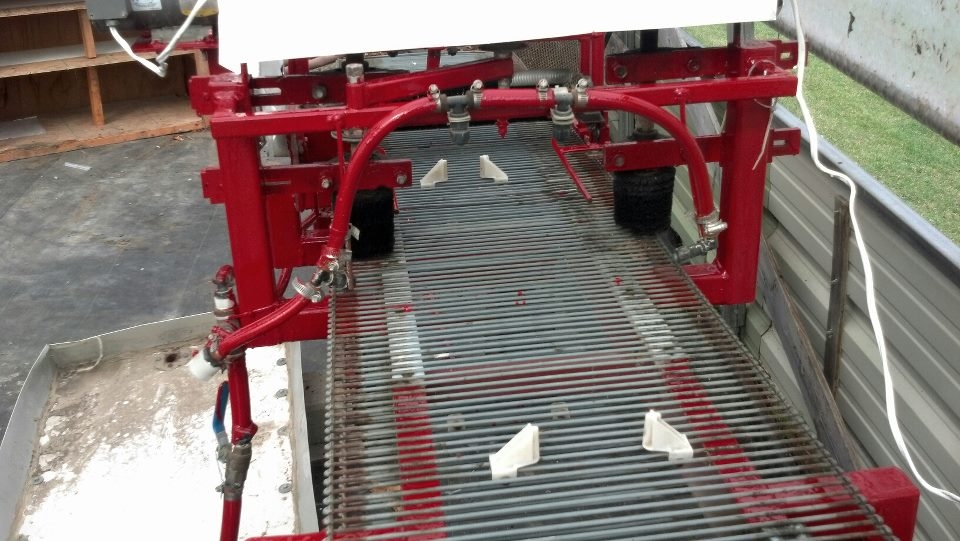 Randy Lambrecht is a Bothwell greenhouse owner who built an automated chain-and-belt-driven tray washer that cuts the time from days to hours.

Randy Lambrecht, who owns a greenhouse in Bothwell with his wife Michelle, is among the ten winners of the 2012 Premier’s Award for Agri-food Innovation Excellence. Lambrecht won for his innovative automated chain-and-belt-driven tray washer that cuts washing time from days to hours.

The tray washer can accommodate varying tray styles and sizes, and can wash up to 500 flats an hour, thoroughly scrubbing the sides and tops of trays. The trays are then dunked in a cleaning tank of disinfectant and steamed before their next use.

“We had always washed trays by hand, scrubbing and dunking them in a trough, which was very time consuming. We did look at a couple of tumble washers but they were very expensive, so Randy, with trial and error, took about two weeks to build the tray washer.”

“Randy has always been involved in farming, growing up helping his Dad and brother, working on farm equipment and of course, dirt bikes and four-wheelers. Randy also has his General Machinist Ticket. Randy is good at fabricating, and he is very thorough at brainstorming. Therefore, there was only one version. He just fixed as he ran into problems.  The biggest challenge was positioning the brushes.”

“Randy is not sure about making the system available commercially, as we are very busy. It is only us who run our farm and we also have three small children. We have 2300 ft2 of greenhouses, grow approximately 140 acres of corn and beans, have a ten-acre contract for pickling cucumbers and also about ten acres of tobacco. Finally, Randy does some undercoating of vehicles.”

Since starting their business, in addition to the tray washer, Randy has also fabricated the farm’s dirt chopper and filler, a watering tunnel and a tobacco cutter.


See the Energy Edge story here about other 2012 Premier’s Award for Agri-food Innovation Excellence, which include two other Ontario greenhouse operations.