Les Exceptionelles has had a positive impact on growers, producers, distributors and garden centres, among others. Winners also receive extensive media coverage valued at over $1 million. 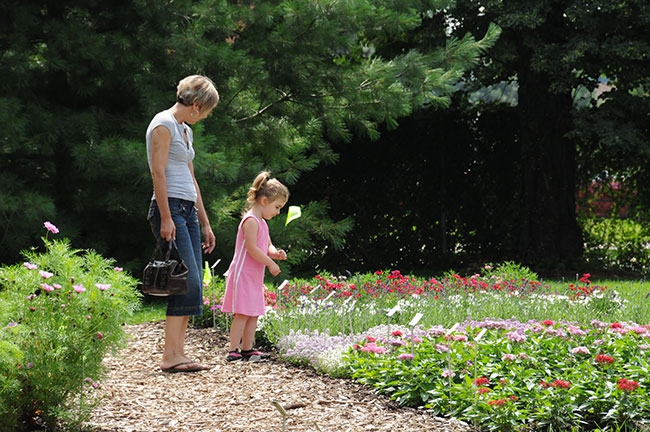 The trial gardens are popular areas to tour. Photo by by Claude Vallée

Les Exceptionelles® is celebrating its tenth anniversary this year. Created by passionate horticulturists, this competition’s unique formula has conquered the hearts of gardeners throughout Quebec and beyond.

Les Exceptionelles is becoming even more popular in the province of Quebec. Designed to increase consumer enthusiasm for annual plants, this program has had a positive impact on growers, producers, distributors, garden centres and the entire horticultural industry. Winners also receive media coverage valued at over $1 million annually, making it an extraordinary platform for annual plants.

Each year, hundreds of varieties are presented
and evaluated in the test plots of the Daniel A. Séguin Garden. This garden of international renown, located in Saint Hyacinth, Que., is a member of the National Plant Trials Database and is open all summer to both the public in general and the horticultural industry.

Each year, over 13,000 visitors are invited to vote for their favourite plants from among those displayed in the trial. Of this number, 3,000 actually do participate, placing flags on the plants they find the most attractive, and thus help target the 30 plants the public most appreciates.

An expert jury then selects, according to strict performance criteria, which plants among the 30 chosen deserve the title of Les Exceptionelles. This system of judging, which is both neutral and oriented toward consumer satisfaction, is the winning formula behind Les Exceptionelles.

The following are this year’s award winners.

1. Caladium Painted Frog™ Red-Bellied Tree Frog
Thanks to the originality and luxuriance of its waxy heart-shaped lava-red leaves framed in green, Caladium Painted Frog “Red-Bellied Tree Frog” literally captivated visitors atto the Daniel A. Séguin Garden. Of course, there’s no denying the plant certainly does catch the eye with its unusual colour.

The unexpected name of this cultivar and its association with frogs comes from a decision of the breeder, Brian Williams, who wanted to educate gardeners about the disappearance of hundreds of amphibian species around the globe since the 1980s. The destruction and fragmentation of natural habitats, pollution, disease and increased ultraviolet radiation are among the many causes of this tragic loss of biodiversity.

Use this Exceptionelles winner both in the garden and in containers, noting that it gives an especially striking effect in mass plantings. When grown in pots, additional heat reaches the roots and promotes better leaf development.

Although caladiums are generally fond of moist, well-drained soils rich in organic matter, heat and partial shade, “Red-Bellied Tree Frog” has proven to be surprisingly tolerant of sunny conditions.

2. Cuphea Vermillionaire™
Here’s a helping hand for the sbackyard environment! Cuphea Vermillionnaire, rich in nectar, is like a magnet for hummingbirds and many pollinators. Requiring no special care, it loves warm spots in the garden and is covered all summer with hundreds of small drooping tubular orange-red flowers.

Since Cuphea Vermillionnaire grows robustly, but not aggressively, it is easy to mix with other plants in arrangements. It stands out particularly well against lime green foliage. This small shrub is perfect for containers and grows just as well when planted in the garden. It blooms most heavily in full sun, but will also perform very well in partial shade. Its unusual blooms give it a contemporary look. This tough plant is ideal for those who don’t have a green thumb!

3. Gerbera jamesonii Patio® Karoo®
The gerbera is one of the world’s five most popular cut flowers and gardeners absolutely flip over this striking flower that symbolizes innocence, purity and joy. Although it has been traditionally reserved for use as a florist plant or a cut flower, the excellent performance of new cultivars now makes it possible for this species to be used as an annual in the average garden. The Patio series, hybridized by the Dutch firm Florist Holland BV, was specifically selected for outdoor planting. The plants are vigorous, relatively compact, disease resistant and very floriferous. They grow equally well in containers and in the garden.

The cultivar Karoo produces a profusion of large semi-double bicolour flowers in cream and pink. They measure from 10 to 12 cm (4-5”) in diameter and are on stems of up to 40-45 cm (15-18”) tall. Since Karoo is able to produce several flowers at once, gardeners can easily harvest a few for indoor decoration as well.

4. Gomphrena Pinball™ Purple
Gomphrenas, or globe amaranths, are known for their resistance to heat and drought. “Pinball Purple” produces a multitude of stems covered with globular flowers in an electrifying purple shade, blooming continuously throughout the season. The 1.5 cm (1/2-inch) blooms make excellent dried flowers and attract butterflies.

Although globe amaranths are traditionally grown by seed, the remarkable vigour of the Pinball series can’t be transmitted by sexual reproduction, so growers produce this series from cuttings, making it the first ever series of vegetative globe amaranths.

“Pinball Purple” is perfect for low hedges or borders 30-35 cm (12-14”) high, for mass plantings and for container gardens. It’s a tough, problem-free plant that will certainly be adopted by many municipalities for their landscaping projects.

5. Impatiens Big Bounce™ White
Whoever said the show was over for impatiens?

It is true enough that the garden impatiens (Impatiens walleriana) is severely affected by a highly virulent strain of impatiens downy mildew (Plasmopara obducens), so horticulturists can no longer recommend growing this plant in most parts of Canada.

The name of this new series of impatiens, Bounce, comes from its amazing ability to bounce right back from lack of water, going from limp and wilted to fully turgid without losing any flower buds. The cultivar “White,” with its light-reflecting flowers that will stand out in dark spots, will be especially useful in re-introducing impatiens to the shade garden.

6. Osteospermum ecklonis Blue Eyed Beauty™
Wow! With its brilliantly coloured flowers, this plant certainly grabs your attention. It’s impossible not to be amazed by this bicolour beauty whose purple eye is accented by brillant yellow petals with a halo of white at their base. Graceful and luminous, “Blue Eyed Beauty” blooms right through the season, unlike other osteospermums that stop blooming in the heat of summer. This explains why this is the first osteospermum cultivar to be named an Exceptionnelles winner.

‘Blue Eyed Beauty’ forms a robust, well-branched plant that goes with everything, either in the garden or in containers. And it makes a perfect gift plant!

“Indian Summer” performed beautifully in all the North American test gardens and won Best New Variety at Colorado State University’s annual flower trial gardens. This novelty will bring a touch of warmth and originality to any garden!

8. Petunia Blanket® Yellow
This is a petunia that truly merits it name! “Blanket Yellow” flowers profusely, as if a lemon-coloured doily had been dropped onto the ground. Robust and aggressive, the plants quickly cover both gardens and containers. Very rain resistant, this cultivar’s small yellow flowers edged in white are renewed constantly and need no cleaning: they simply disappear after flowering.

For all those who enjoy playing with colours, consider making this petunia your main colouring tool, as it goes perfectly with all other colours, both warm and cool.

9. Thunbergia alata Arizona Glow
Make room for opulence! This generous annual can dress up pretty much anything. The numerous twining stems of this thunbergia wrap around everything they encounter: fences, arbors, obelisks, branches, railings, etc. And if it doesn’t find anything to cling to, the plant will continue on its way, forming a dense ground-level mat of leaves and flowers.

Few annual vines are so generous in their covering ability and the abundance of their bloom. You can use garden twine to turn the plant into a unique visual display. Used in pots or in the ground, the cultivar “Arizona Glow” produces a multitude of orange-red flowers with a dark eye, the latter giving this species the nickname Black-eyed Susan vine. Although you may hesitate to try something so little-known, once you’ve discovered the unrivaled luxuriance offered by this little bit of garden paradise, you will want to use it year after year.

The trial gardens are popular areas to tour.

LES EXCEPTIONNELLES: EASY AND RELIABLE PLANTS
Les Exceptionnelles is a registered trademark of the Fondation en horticulture ornementale de l’ITA de Saint-Hyacinthe (Foundation in Ornamental Horticulture of the Saint-Hyacinthe Institute of Agri-food Technology), a non-profit organization that administers the school’s Daniel A. Séguin Garden, and whose mandate is to promote and support the development of knowledge in ornamental horticulture throughout Quebec. Chosen by both the public and by experts, the title Les Exceptionnelles is awarded to new plant introductions that stand out for their garden performance, ease of cultivation and resistance to insects and diseases.