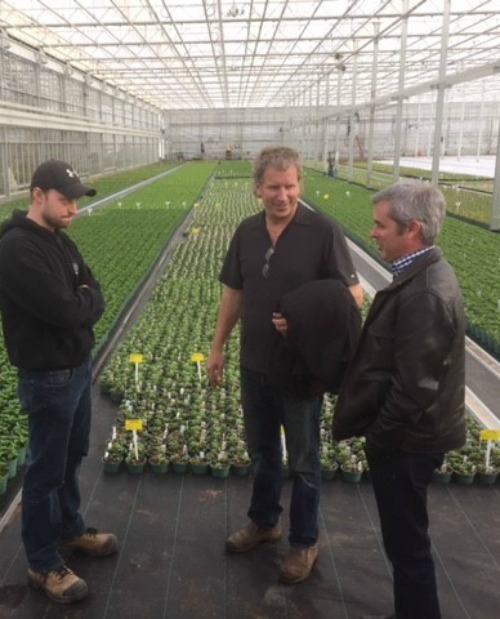 ErfGoedFloors that have been installed at Orchard Park Growers (St. Catherines) and at Meijers Fruit Farms (Niagara on the Lake).

Peter Vos (COO of ErfGoed) gave the visitors a glimpse into the day-to-day operations of the cultivation floor specialist. He outlined the development of the company since 1958.

Arjan van Dam (ErfGoed supervisor on the projects) talked about the installations.

Gerard Schouwenaar of Orchard Park Growers praised the partnership with ErfGoed during installation of the cultivation floor. His first crop can now be seen on the ErfGoedFloor.

“What I can see to now is really good. The crop is in excellent condition. The uniformity of the crop is clear for all to see. One of the reasons why I went for ErfGoed is that I definitely do not want puddles on the floor. They are a source of all sorts of harmful diseases. The men from ErfGoed are as good as their word: when I water my crop, there are no puddles left on the floor.”

After a tour of the glasshouse, the open day continued with a visit to Meijers Fruit Farms. There too, the ErfGoedFloor had recently been installed, and they were busy filling the floor with the first plants.

“Vehicle movements were an important criterion for the grower when opting for the ErfGoedFloor,” says Peter Vos.

“Visitors were really enthusiastic about this initiative. Growers in the area knew that ErfGoed was hard at work here. Many of them had let us know that they would like to come and see the floor when it was in use. This is their opportunity.”

In addition to viewing the ErfGoedFloor, this meeting was a good occasion for networking. And, indeed, there was a lot of that going on. It is clear that ErfGoed has now also obtained a strategic foothold in Ontario.