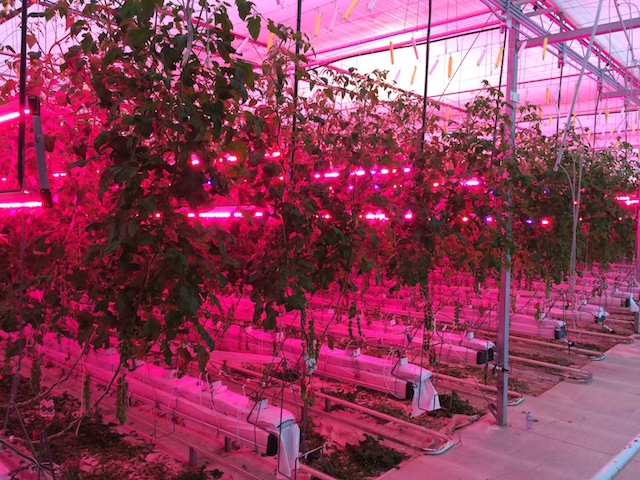 May 27, 2016, Elmira, Ont. – Philips Lighting, a Royal Philips company and global leader in lighting, recently teamed up with Elmira’s Own Produce for the installation of Philips GreenPower LED interlighting.

Installed in a double-poly greenhouse, the LED interlighting is being used in to grow the company’s popular Elmira’s Own brand of beefsteak and grape tomatoes.

Prior to the LED interlighting installation, the greenhouse, covering an area of more than 3,400 square meters, relied solely upon natural light for crop production. Without supplemental light, Elmira’s tomato production followed a schedule with planting taking place the first week of November.

With the installation of interlighting, Elmira’s Own Produce now plans to plant their crops during Week 35, thereby enabling them to begin harvesting by the end of October and take full advantage of higher winter tomato pricing.

“The only way to achieve this was through the addition of light, and light in the form of Philips LED interlighting proved to be the optimal lighting solution for their situation.”

Philips GreenPower LED interlighting is a bi-directional LED lighting module designed to be placed below the crop canopy and direct light to the belly of crops and drive plant growth. LED interlighting can be used for growing high-wire tomatoes, cucumbers, peppers and eggplants.

Gerry Blake and Stuart Horst, owners of Elmira’s Own Produce, collaborated with Paul Boers Ltd, a Philips certified LED horticulture partner and the designer/builder of the Elmira’s Own greenhouse, and Philips Lighting, on the interlighting design and installation.

With hundreds of projects completed, Philips Horticultural LED Solutions has extensive experience investigating the effects of LEDs on a range of crops. Every project results in an optimum light recipe, a knowledge-based instruction on how to best use light to grow a certain crop under certain conditions.

• Parameters for which the recipe is valid, e.g. climate conditions.

Royal Philips, the global leader in lighting products and technology for more than 100 years, has been at the forefront of innovative LED technology for a wide range of consumer and commercial applications.

As part of the company’s leadership in horticulture LED, Philips continues to significantly invest in LED research and collaborate externally with higher education facilities and research institutes.

This emphasis on research as well as ongoing expansion of the LED Horticulture Partner network demonstrates Philips’ commitment to continue leading the horticulture industry as the innovative LED solutions partner.


Related
Inside View: Being keen on green with LEDs… or LEEDs
Ottawa supporting LED research project
More trials underway with mums under LEDs
‘Out of darkness cometh light’