Growers are warming to such concepts as alternative fuels and conservation measures in structures and crop management strategies. Results of a comprehensive energy audit study, now underway in the Leamington and Niagara regions, will be released in the fall. It will identify key energy-saving features and quantify their savings potential in both poly and glass structures. 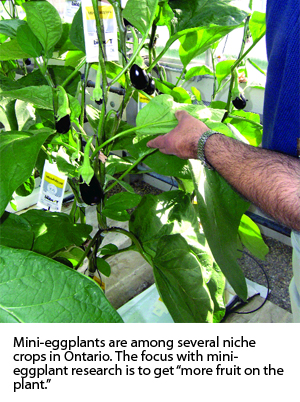 Determining how best to optimize energy usage and enhance conservation measures is a goal of a major energy audit program now underway across the province. Project sponsors include the Ontario Ministry of Agriculture, Food and Rural Affairs (OMAFRA) and Ag Energy Co-operative, along with The Ontario Greenhouse Alliance (TOGA) and its member associations, the Ontario Greenhouse Vegetable Growers and Flowers Canada (Ontario).

The study is now completing audits of 20 greenhouses throughout the province. This data collection phase followed earlier intensive energy audits of four greenhouses, two each in the Leamington and Niagara regions, to identify what energy-saving features to study in the review.

OMAFRA greenhouse vegetable specialist Shalin Khosla says the study is hoping to identify key energy-saving features and quantify their savings potentials in both polyethylene and glass covered structures. The results and recommendation will be made available to other growers later this year, including a presentation expected for this year’s Canadian Greenhouse Conference (Oct. 4-5 in Toronto).
Getting more natural light into the crop, especially early or late in the season, is one reason many growers have been moving to glass with new construction over the past two years. Of the 62 hectares of new construction in 2004, some 47 per cent was glass. Last year, 59 per cent of the 58.4 hectares built was in glass.

“We have found that with glass,” explained Khosla, “you can be about a week to 10 days earlier in production.”

The price differential between poly and glass has narrowed. And glass requires proper management of energy curtain use to maximize conservation measures and minimize yield reductions due to excessive heat.

Another continuing trend is with the popularity of hot water systems. It’s only been since the very late 1990s that growers began switching in large numbers away from steam. About 90 per cent of new construction includes hot water systems, complete with storage tanks and CO2 flue gas recovery units. With steam, growers don’t have that same CO2 recovery capability.

Hot water provides a more “modulated environment, a steady and more even temperature” than that available with the on-off cycling of steam. And because heat is radiating off the pipes in the form of the convection air currents, there’s the added benefit of constant air movement throughout the crop.

Growers have access to some new shading application products to help with summer cooling. One relatively new product, when compared to the more traditional shading product, blocks off more of the infrared wavelength.

Results so far have shown that it takes out more of the infrared light without significantly affecting light transmission. “It’s removing the heat, but not the light,” noted Khosla. “Normally when you shade, you also take away some of the light.”

Fruit and leaf temperatures were also recorded, and both were cooler with the new product.

Working with the supplier’s optimal application rates and techniques are being established for Ontario conditions.

Khosla and AgCanada colleague Dr. Xiuming Hao of the Greenhouse and Processing Crops Research Centre, and Dr. Fernando Preto of the CANMET Technology Centre of Natural Resources Canada, will be working together on a major study of biomass fuels for greenhouse boilers.

Fuels to be studied will include wood chips, corn and oats, among others. The key, said Khosla, is working with high-quality fuel sources. Growers can’t afford problems caused by fuel foul-ups. “Poor fuels cost money in down-time.”

The study will also look at capturing CO2 from the flue gas.

mini-cukes, and mini-eggplants. And coloured peppers are increasingly popular, with yellows and oranges catching up to reds in production numbers. “It used to be a 10:1 ratio of reds to the other colours. Now the gap is not that large.”

The key, he said, is that production is adjusting to the niche markets.

Khosla has been trialling mini-eggplant crops for the past three years. His current project involves three-stem and four-stem systems. “We need to get more fruit on the plant,” he said during our tour of the greenhouse.

The plant grows well, but it hits the wire quite soon. While it can be lowered in much the same fashion as tomato plants, it’s not quite as flexible.

What he’s now doing is topping the plant once it gets to the wire, and focusing on the side shoot. Once the fruit is harvested, a new side shoot develops. In trials last fall, the drop in production when they moved from the main stem to the side shoot was “quite small. We were back in production within a week.” Growers should be able to make the transition from a tall crop to a short crop without losing too much in production.

There are about four or five local growers with mini-eggplant crops. “It’s a popular plant for whiteflies and thrips,” he said, “but the biologicals work well.”

In another project, he is looking at fruit loading in pepper crops. The goal is to have more uniform harvesting during the season, and that includes earlier fruiting, rather than flushes as you cycle through production.

“It’s been looking good so far in our trials. With the newer, stronger varieties, we feel we can allow fruit setting to occur lower on the plant given our higher light levels in Ontario in the winter. We want to capture that early light and early production.”

There’s growing interest in coco-fibre media. Until quite recently, the Ontario industry grew almost exclusively in rockwool. Now, about 70 per cent of pepper production, for example, is in coco. A number of cucumber growers have also made the switch. And while most tomato production is still on rockwool, some growers have tried coco with good results.

The main advantage is that once the crop is pulled out, the coco can be applied as a soil amendment. Rockwool, on the other hand, has to be processed before it can be used in the same fashion.