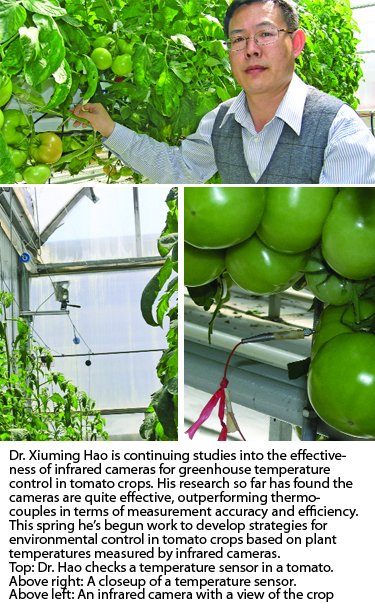 If you ask a grower to list his or her top three challenges, energy would certainly be on everyone’s list.

Fuel prices stabilized somewhat this past winter, but they remain at high levels and there’s always the chance they might rise dramatically.

Dr. Xiuming Hao has a number of energy-related projects on the go, with some positive results to report.

He and his research team have advanced the temperature integration strategy in recent tomato crop trials by incorporating low pre-night temperatures, which were set 4ºC cooler than the control crop for three hours each evening.

The new temperature integration model resulted in leaf temperatures being 1-2ºC cooler than fruit temperatures during pre-night period. It also reduced the vapour pressure difference between the leaves and the air during the pre-night period, which changed the growth balance towards more fruit growth. Fruit yield was improved, with the especially vegetative variety Big Dena showing the greatest gains. In fact, while all three cultivars grown with the low pre-night temperatures showed increases in early production, Big Dena maintained the higher levels throughout the whole production period.

Yields of the other two varieties (Clarence and Macarena) evened out over time to match levels of the control crops. However, higher yields early in the cycle, when prices are usually higher, would mean better overall returns for growers of all three cultivars.

“Over the life of the crop,” notes Dr. Hao, “the energy costs under this program (low pre-night temperatures) will be the same or less than other systems.” The study found energy costs were lowered by three to five per cent.

Dr. Hao is also studying the effectiveness of the liquid foam technology developed by Sunarc of Canada. The first year of trials has been completed in this three-year project, and the results so far have been encouraging.

The goal is to develop strategies to optimize the use of injected foam in heating and cooling strategies for various crops and cultivars.

In the winter, the foam is injected at night to trap heat. The early research has found that the heat loss through the roof is reduced by anywhere from 40 to 50 per cent. Most heat loss from commercial greenhouses is through the roof.

“The trials are showing the potential to reduce high temperature stress on the plants in the summer, and to reduce the percentage of fruit that’s unmarketable because of heat stress-related problems.”

In a third project, Dr. Hao extended his work with high wire cucumber production with supplemental lighting, to mini-cucumber varieties.

Work with the traditional long English cucumber varieties concluded last year. The results were quite impressive, with potential yields of between 280 and 300 cucumbers per square metre per year, about double that of traditional production systems. One B.C. grower using the system has already achieved 278 cucumbers per square metre per year, with hopes to exceed that mark this year.

“Mini cucumbers may have even more potential to benefit from high wire production and supplemental lighting.” Stem growth with minis is slower than with traditional cucumber varieties, meaning growers won’t have to de-leaf or lower the crop as often. Under the high wire system, the cucumbers will all be at about the same level and will be much easier to harvest, said Dr. Hao, unlike traditional systems where workers have to search for the fruit.