Our third annual state-of-the-industry report finds energy and labour among the major challenges. Carbon pricing programs are high – and could possibly grow higher – on the agenda for most grower groups across Canada. 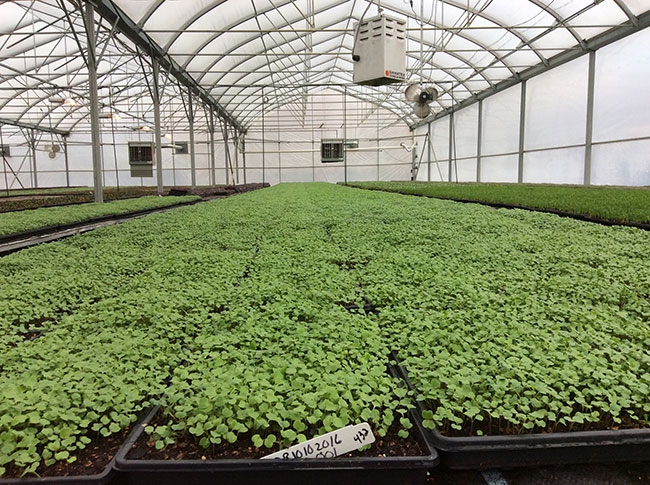 January 2017 – Welcome to our third annual state-of-the-industry report, an inside look at some of the factors impacting greenhouse horticulture from coast to coast. It’s another taking-of-the pulse with new and previously included voices and their views on what’s happening today – and what’s to come.

Energy: Overall, interest in LED lights and year-round production continues across Canada, but all thoughts related to energy issues are coloured by serious concerns about carbon pricing.

Andrew Morse, executive director at Flowers Canada Growers, says that in Ontario, electricity costs have been rising steadily, and new costs associated with natural gas will come into effect in January with the province’s “cap and trade” program. While he notes that this is somewhat more difficult to predict across the country, “new [carbon] regulations have the potential to damage Canada’s competitiveness with other jurisdictions. The fine detail of regulatory implementation will dictate the impact of this issue on producers.”

A SIGNIFICANT COST
Dr. Justine Taylor estimates that the Ontario program will cost members of the Ontario Greenhouse Vegetable Growers (OGVG) who produce 10,000 tonnes or less of CO2 annually (from burning natural gas) about $6200 per acre. Taylor, the OGVG’s energy and environment coordinator, adds that growers who produce somewhat more than that have the option to join in with growers who produce a great deal more than that, under the large-consumer part of the program. This scheme provides participants a fee exemption in 2017, with a requirement to pay only 4.5 per cent of their calculated fee in 2018, nine per cent in 2019, and 13.5 per cent in 2020. Participants will also have to complete an emissions report verified by third party and fulfill other requirements. Taylor says the OGVG is holding ongoing meetings with the provincial government to discuss this disparity. On a positive note, she believes cap and trade may spur more partnerships between greenhouses and companies or electricity generators that produce CO2 and heat.

A REBATE IN B.C.
Bob Pringle, CEO of United Flower Growers (the B.C. flower auction) notes that while natural gas costs in B.C. are currently low, he and his organization are watching things closely. “Greenhouse growers in B.C. get an 80 per cent rebate with the provincial carbon tax at this point,” he notes, “but we are concerned this may be affected with a national plan in place.”

Dallaire Boily adds that since 2013, a break on electricity costs has allowed some greenhouses to move to year-round production, but the introduction of LED lights is still slow. In addition, the province will be re-launching two energy efficiency programs (Ecoperformance and Technoclimat) soon, and is also working on a new energy policy to encourage the development of renewable energy and new technologies.

“The development of cheaper technology for biomass burning, (including the gas for CO2 recovery), the recovery of heat (cogeneration) and the production of greenhouse vegetables year-round should continue over the next few years,” says Dallaire Boily.

YEAR-ROUND PRODUCTION
B.C. Greenhouse Growers Association executive director Linda Delli Santi notes that interest from consumers and retailers in year-round production continues to be strong in her province, but for this to become reality, lighting must be economical. “As electricity costs are so high, alternate energy sources are required (cogen or co-located with industrial installations that can provide heat and CO2).”

Taylor reports that more and more vegetable growers in Ontario are testing small areas of production with supplemental lighting, and that a recent Ontario government announcement of changes to the Industrial Conservation Initiative (ICI) may allow some greenhouses to access cheaper electricity rates and move towards all-year production. The public comment period on this proposed change ended in mid-November, and time will tell if the proposed change (allowing those who use only 1 MW a month to qualify) will become a reality. Taylor says 1 MW equals about two acres of HPS lights.

Morse notes that the range of LED products in Canada is growing, but that there “remains much to learn about LED use in commercial production.”

“We have recently partnered with Gordon Food Service, the Ontario government and four other commodity boards,” he says, “to try to get more awareness of locally grown produce in the foodservice industry.”

It is hoped that the  projects will increase the sale of Ontario-grown food by $5 million each year.

In B.C., Delli Santi notes that “Buy Local” is definitely still a big draw, but that sentiment varies depending on the region and retailer.

“Greenhouse produce is definitely perceived as having better food safety from a retailer perspective, but generally speaking the average consumer doesn’t know enough to have this opinion,” she explains. “Veggies are trending to smaller, snacking specialties that drive better flavour. The challenge here comes from whether the reduction in yield and corresponding increase in cost will be accepted by the market.”

ORGANIC PRODUCTION A TREND
In May 2016, MAPAQ launched a strategy to support organic greenhouse vegetable production, which continues to expand in Quebec.

“The concerns of consumers for the environment, and health and safety of food drive the growing interest for the purchase of local products,” Dallaire Boily notes. “Greenhouses in urban areas are expanding to meet these new needs.”

While tomato production (beefsteak, grape, heirloom, etc.) makes up almost 60 per cent of Quebec greenhouse produce sales, diversification is growing. “The range is expanded into mini-cukes, peppers, varieties of lettuce, herbs and strawberries,” says Dallaire Boily. “Also, with immigration and openness to the world, demand is growing for exotic vegetables in the greenhouse, such as eggplant and napa cabbage.”

On the flower side, Pringle says B.C. growers are getting good prices for cut flowers and plants, with more demand from the U.S. because of the low Canadian dollar. “The wedding demand was good this year,” he reports. “There was lots of demand for white flowers and some non-traditional colours. There was also a good demand for tropical and foliage.”

FLOWER SALES GROWING
Morse expects national flower sales to continue to grow. ”We have seen notable increases in sales across the country since 2013, and increases in exports to markets within the U.S.,” he says, adding that “over the last year we have noticed some growth in a number of places, including cut lisianthus, cut chrysanthemums and cut ranunculus to name a few.”

Dallaire-Boily notes that although baby boomers are gradually moving away from gardening as they age, the younger generations are interested in landscape design and ready-to-decorate products for their terraces, with easier-to-maintain planters becoming more popular.

Labour issues: Labour issues remain a challenge for most floral greenhouse operations, according to Morse.

Pringle points to a scarcity of entry-level employees across the board in B.C., and also in mid-tier management positions. “The unemployment rate is low right now here,” he notes. “Growers may have to offer higher wages and also access more staff in the seasonal Temporary Foreign Workers Program (TFWP).

In Quebec, Dallaire-Boily says the difficulty in recruiting managers along with issues with the in TFWP are limiting factors in the economic development of the horticultural sector.

In the U.S., the situation is similar.

Ken Fisher, president of AmericanHort, says the availability of both manual and skilled labour is limiting the ability of many businesses to grow and prosper.

“The direct cost of labour and associated overhead costs are a growing component for nearly all of our members,” he explains. “AmericanHort is coordinating with other like-minded organizations working for sensible immigration reform and reasonable labour improvements.”

MORE AUTOMATION AND ‘LEAN’ PRINCIPLES
Fisher adds that there are growing opportunities in automation and the use of ‘Lean’ thinking to lower labour costs.

Seguin of the OGVG says the current mix of labour programs are working well for Ontario vegetable growers.

Delli Santi in B.C. says availability of labour is always a concern in that province’s greenhouse veggie sector, but “the bigger concern is the disparity in cost of labour for Canadian greenhouses versus Mexican and U.S. imports.”

Moving forward: When asked to identify the biggest challenges and trends facing greenhouse owners in 2017 as well as over the next 10 to 20 years, many industry experts focused on environmental issues.

Taylor says that “the move to a low-carbon economy in Ontario will lead to significant changes over time in the technologies used and methods of production of greenhouse vegetables. Growers will need to find new efficiencies, new products and enhanced value for consumers in order to remain competitive with other jurisdictions that have not moved to a low-carbon base.”

“COMPETITIVE IMBALANCE”
Delli Santi agrees. “Government programs such a carbon tax and recycling fees are further creating competitive imbalance versus other regions that do not have the costs associated.”

In the long term, she sees concentrated production centres losing ground to new greenhouses in regions previously without them. “Retailers are getting larger so margins are being squeezed very tightly,” Delli Santi adds. “The world is getting smaller, pests and diseases travel quickly … and they can have significant impacts on our production.”

Pringle lists many challenges ahead for United Flower Growers members, from growers being forced into either marketing directly themselves or hiring marketing companies to make direct sales to large retailers, to costs related to more layers of regulatory bureaucracy on recycling, water restrictions and more.

“Real estate values are very high in B.C., allowing those who wish to sell a good opportunity,” he says. “It’s been hard to sell for years for some growers. Some offshore investors have come into the market … Over the last few years, we’ve lost a few members, but we don’t necessarily lose volume because other members step up production.”

MORE CLEAN ENERGY
Claude Laniel, general manager of the Syndicat des producteurs en serre du Quebec, says in the near future, he expects a rebuilding of research into clean energy. Over the next five years, his organization has a goal of adding 40 hectares of veggie production, with a focus on products that meet the needs of consumers, including organic veggies and those produced with minimal pesticides as part of their IPM programs.

Morse adds that several crop protection products are being re-evaluated by Health Canada, and loss of some notable registrations will require producers to seek alternative products.

Fisher at AmericanHort notes spending on landscaping is also growing among U.S. homeowners.

“As breeders and growers innovate to differentiate their products, intellectual property management becomes an important success component,” he adds. ”Domestic and international movement of plant material would benefit from better processes and standards. Generational transfer of family businesses and successful assimilation of emerging professionals into our maturing industry will be necessary in the next five years to ensure the continued growth.”

Morse reports that Canada and the U.S. officials have completed negotiations on the Greenhouse-Grown Plant Certification Program (GCP). ”This program will become an important program for Canadian flower growers accessing the U.S. market or sourcing propagative material from U.S. producers,” he notes. The new program is expected to begin its rollout in 2017 and is expected to require some change in common export practices across Canada.