From geothermal and solar and landfill gas, and from composting and working with neighbours 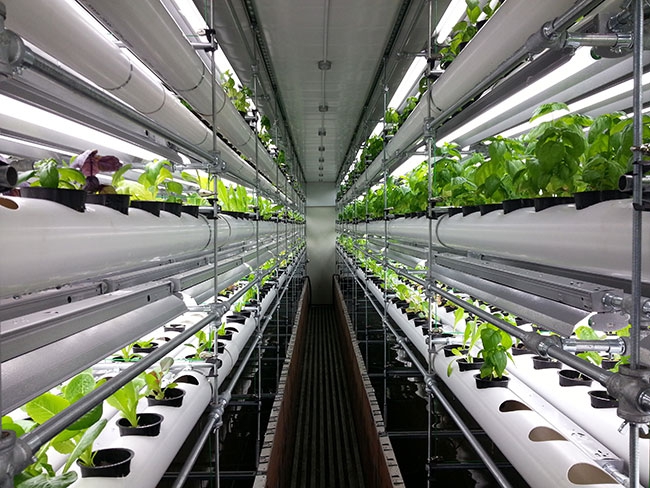 Lettuce and herbs growing in a shipping container at the Fort McMurray landfill. Photo by Joey Hundert / Sustainitech

August 2015 – The landscape of greenhouse heating is changing in Canada as we speak. There are now a small but significant number of greenhouses across the country being heated in ways only imagined decades ago – or not imagined at all.

And if people like Craig Dunn, chief geologist at Borealis GeoPower of Calgary, have anything to say about it, there will be many more greenhouses in Canada using alternative sources of energy.

Dunn notes that geothermal is a cost-effective way of producing power as well as heat, and that there is great geothermal potential in Canada.

“The basic idea behind direct heating is to tap into a moderate heat source (40 to 60 C), be it directly from the ground or as a byproduct of a power plant, and bring that heat to the surface in the form of hot water,” Dunn explains.

He notes that in areas where there is a higher-than-average heat gradient, only moderate drilling is needed to produce these results.

CURRENT PROJECTS IN THE WEST LOOK PROMISING
While producing electrical energy from high temperature sources is a major focus, the firm also recognizes the abundance and need for lower energy heat sources in a variety of direct heating applications such as greenhouses.

It’s a matter of finding the right fit between economy of scale and local market needs, and matching that with areas where there are known heat sources close to the surface. The company is hoping that current projects (near Terrace B.C., Valemont, B.C., and Ft. Liard, N.W.T.) will be local points for community engagement and that greenhouses will exist in the future at these sites – and others.

Valemont counsellor Owen Torgersen says they will continue to support and investigate further into geothermal opportunities.

“YEAR-ROUND FOOD PRODUCTION IN THE NORTH IS VITALLY IMPORTANT”
“Advancements in technology have identified countless practical direct-use heat applications, and are allowing for more effective exploration and reduced costs of investment,” Torgersen notes.

“Year-round greenhouse food production in the north is vitally important. It will help maintain sustenance for a local population, it will provide employment and it will offset transportation costs, thus lowering an overall carbon footprint.”

Dunn points out that cutting-edge greenhouse technology designed for northern climates is also very important in putting alternative heat sources to use. The newest tech allows heat requirements to be scaled back and for costs to be significantly reduced.

One person who has put a great deal of work into northern climate greenhouse design is Wenkai Liu of Wenkai Oriental Vegetables in Elie, Man.

Over the last few years, Liu has adapted Chinese solar greenhouse technology for North American conditions. He has three of these greenhouses himself and sells several greenhouses each year, with sales totalling 24 so far in Alberta, Ontario, Saskatchewan and the U.S.

The Wenkai greenhouse is designed to face south to directly absorb solar energy, and Liu has updated the design to add an easy-roll thermal blanket. He notes that during wintertime, a heater may be needed during the night if the temperature falls below 15 C. However, in the extreme cold of February 2014 with temperatures of -35°C, the monthly electricity cost to heat each of Liu’s greenhouses was less than $100, with a daily cost of about $3 during the extreme cold snap.

Owners Lori Ann, Rene and Stefan Regnier use a boiler that accepts various feedstocks to heat water that flows through pipes in the northern cement wall of the greenhouse. They have tomatoes ready for sale each year in early May.

Because it’s an organic operation, the Regniers find it valuable to let the greenhouse freeze for a month or so over the winter to kill insect pests.

Solar energy is prominent in the creation of the “Gemini Synergy Centre” in Grove City, Ohio. This large-scale project, headed by a group called Team Gemini, will feature biogas, biomass and waste-to-energy plants as well as a membrane bioreactor water treatment plant, all supporting three greenhouses with roof-mounted solar panels.

The centre will serve a 343-acre industrial and business park with renewable electricity, steam and methane gas with 100 per cent onsite recycling, wastewater treatment and water supply in addition to food and fish production. The recycling plant has broken ground, and completion dates for other aspects still need to be determined.

The lighting and heat for these shipping containers (supplied by Sustainitech) is provided by a gasifier that burns wood chips from the local landfill’s stockpile of wood debris. Plans are in place to eventually gasify all the waste produced in Fort McMurray that cannot be recycled.

Ashley Boyd, sustainability associate with the Regional Municipality of Wood Buffalo, says a second and third aquaponics container will be put in place this year.

HEAT RISES … AND THAT’S GREAT FOR ROOFTOP CROPS
Heat from commercial neighbours is being used by Lufa Farms in Montreal to support their greenhouse crops. The company has two rooftop single-wall greenhouses with a third site planned. The company uses drip irrigation in hydroponic production of tomatoes, cucumbers, peppers, greens, eggplants and more.

There is rainwater capture and composting as well, and all the irrigation water is recirculated.

Greenhouse director Lauren Rathmell notes that “it’s more expensive to build rooftop greenhouses due to building codes and structural requirements,” but that “we use close to half the energy of a ground-level greenhouse, largely due to rooftop advantages for energy savings.”

Most of the heat comes from high-efficiency natural gas boilers, and energy screens help keep it in place. There are two climate zones in one of the greenhouses, providing different growing conditions for different crops (e.g., cooler temperatures for some greens and herbs).

To keep more of their profits, the company uses a CSA (community-supported agriculture) ordering system to sell directly to consumers. It includes baked goods, apples and many other products sourced from other suppliers.

On a very small scale, the “Energy Program” of the Practical Farmers of Iowa (PFI) has demonstrated the use of “trickle energy” to extend the spring season in high tunnels.

PFI energy consultant Rich Schuler explains that a compost system prototyped in spring 2014 successfully heated a portion of the soil in a high tunnel during several cold snaps. He describes it as a compost heat pump where heat is transferred by circulating warm water. The largest soil temperature margin achieved by the system was 5.1 F.

Lettuce and herbs growing in a shipping container at the Fort McMurray landfill.

GOOD NEIGHBOURS WITH CO2 TO SHARE
On a large scale, other alternative energy arrangements in Canada involve relationships with industrial neighbours. The most famous of these projects in Ontario is Truly Green Farms, which partners with GreenField Ethanol in Chatham.

For several years, the 22.5-acre greenhouse has used CO2 from the ethanol plant, and by 2016, it will also utilize waste heat. Phase two of the project is happening this year, and by the time phase four is finished within 10 years, there will be 90 acres under production.

“Conventional greenhouses have boilers where you can syphon both heat and CO2 in a connected fashion, but with our system, they are separated,” he explains. “In the spring for example, more CO2 is needed, but less heat.”

HEAT FROM LANDFILL SOURCE
Productions Horticoles Demers has been using waste heat from an 8-MW landfill gas-fuelled power plant near Drummondville, Que., since late 2012. Water is heated and travels through 600-metre pipes to the two greenhouses, where 3.2 hectares of tomatoes and berries are grown year round.

Owner Jacques Demers and the power plant (owned by Waste Management) signed a 30-year agreement for water heating at a low price. Hot water from the plant also heats several other buildings and a water treatment plant.

The Demers greenhouses feature energy curtains and lights as well as heat pipes running within the crop. Young tomato plants are set up in July or August to have production in the fall when older plants start to wind down.

Every row has two separate irrigation lines that feed older and younger plants according to their needs. “Everything is going quite well,” Demers says.

Expansion is underway, with acreage to be doubled by 2016.

Will we see more industrial projects such as these? “Because the Canadian market is still waiting on decisions from the government,” says Stefan De Wit, project engineering manager at Cummins, “there isn’t a lot of movement in using heat from industrial sources. However, it remains a high-potential market.”

Borealis GeoPower’s Dunn believes that beyond geothermal, waste heat from drilling into the ground for oil and gas is also an excellent opportunity for greenhouses. He notes that waste heat in the form of hot water is extensively pumped out of oil and gas wells in northern B.C., Alberta and Saskatchewan from wells as deep as 4.5 kilometres.

“They put that hot water back into the ground,” Dunn notes. “The heat is considered an annoyance to operations and the water a liability. Every oil and gas wastewater program in my opinion should heat a greenhouse. The homework has been done, and it’s a partnership opportunity that could happen now.”

Treena Hein is a freelance writer in Ontario and a frequent contributor to the magazine.