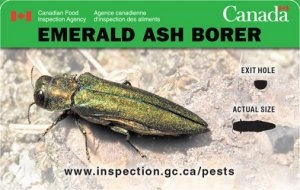 The emerald ash borer (EAB) has been confirmed in Moncton, New Brunswick. The third detection in the province, this is outside of currently regulated areas for EAB in Canada.

CFIA and its partners are conducting additional surveys to determine whether the pest has become established in the area, and if so, the extent of the spread.
Effective immediately, the movement of all ash material (such as logs, branches, and woodchips) and all species of firewood from the affected site is restricted. The property owners in the affected area have been notified of these restrictions.

Although the emerald ash borer poses no threat to human health, it is highly destructive to ash trees. Native to China and eastern Asia, its presence in Canada was first confirmed in 2002 and has since been found in parts of five provinces – Quebec, Ontario, Manitoba, Nova Scotia and New Brunswick. It has already killed millions of ash trees in Canada and the United States, and poses a major economic and environmental threat to urban and forested areas of North America.

The most common way for the emerald ash borer to spread is through people moving infested materials such as firewood, logs, branches, nursery stock, chips or other ash wood. The emerald ash borer also spreads naturally through beetle flight. Research indicates the adult can fly up to 10 kilometres, but generally does not stray from the immediate area when it emerges.

CFIA continues to work with federal, provincial, municipal and First Nations partners and organizations to slow the spread of this pest and to protect Canada’s forests, municipal trees and nurseries.