With the continued popularity of this spring crop worldwide, there’s no end in sight for the Dutch tulip bulb industry. 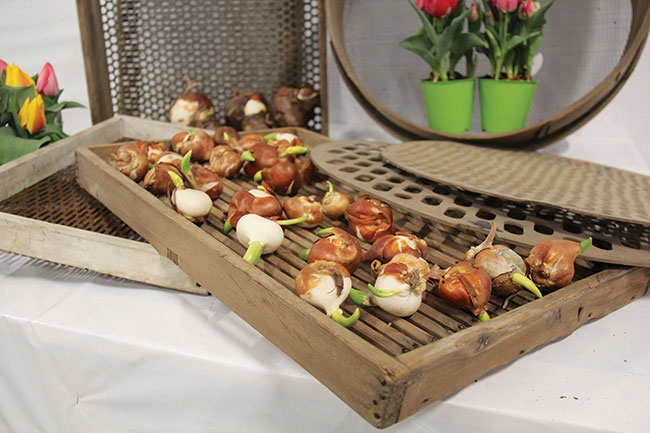 Tulips take the stage during the 2019 Tulip Trade Event in the Netherlands. Photo credit: Greenhouse Canada

Tulips are a sure sign of spring, and for the Dutch people and their descendants, this could not be more true.

From mid-March to the end of May, Holland’s landscape comes alive with colour as cultivated bulb crops reveal their blooms. The season opens with crocuses, then daffodils and hyacinths, before the tulip – the Netherlands’ national flower – makes its grand entry.

With its origins in present-day Turkey, the tulip is believed to have arrived in Holland in the sixteenth century. Its popularity grew over time, and was even used in place of currency during Tulipmania, a period in the Dutch Golden Age where the tulip’s financial value rose to such great heights that a single bulb could be traded for a house.

Although the economic bubble of Tulipmania eventually collapsed in 1637, tulips are still revered worldwide. The Dutch who immigrated to other countries brought their tulip-growing expertise with them, but many bulbs still originate from the Netherlands to this day.

First opened in 1979 by Henk and Dirkje Van Koeveringe, Spring Valley Gardens in Niagara, Ont. operates over 10 acres of production space with an impressively diverse array of crops, including amaryllis, azaleas, chrysanthemums, hydrangeas, poinsettias and, of course, tulips.

For second-generation owners John, Jake and Ron Van Koeveringe, and now their third-generation successors, Spring Valley’s tulip season runs for about six months, starting soon after the poinsettias finish in December. Their tulip crop is done in one of two ways – either potted or cut.

As John explains it, tulip bulbs need a certain period of vernalization before they reach the ‘G stage’ and become ready to flower. For bulbs from the Netherlands or the northern hemisphere in general, specific timing will depend on how early spring arrives in those regions, but Dutch bulbs are generally sourced for flowering at Christmas or thereafter.

For bulb exporters like Bot Flowerbulbs, sending new planting material to southern countries generally increases the price by three to four cents (in Euros) per bulb, says Marco Knol, sales manager at the company. The demand drives up the price, but the costs keep the market small.

Bulb crops in the Netherlands are generally distributed by exporting companies, of which there are around 100 in the country. Sourcing their material from over 1,500 bulb cultivators, bulbs are then sold to two main segments: either for consumer gardens and landscapers as bulbs or to professional growers for forcing, another term for growing.

According to Dutch flower bulb association iBulb, 60 per cent of the world’s flower bulbs are produced in the Netherlands. 8.5 billion bulbs are produced annually on 34,000 square miles (~88,000 square kilometres) of land, mainly in the north Holland area. Dutch bulb trades account for 85 per cent of the bulb trading activity worldwide. Of the ones exported from the Netherlands, over half travel to countries outside of the European Union.

Given the large volume of exports and the number of countries receiving them, it’s no wonder bulb exporters are needed.

“If you grow bulbs yourself and also want to sell them abroad (export), then you need a suitable organization for this,” says Anne Verdoes, marketing coordinator at iBulb. By a suitable organization, she’s referring to sales and administrative staff, storage and treatment facilities, and knowledge surrounding export rules.

“They can ensure that they supply the requested assortment, especially in times when the flower bulbs or certain types are less available,” Verdoes adds. Plus, export companies can follow up after sales, handle customer complaints, ensure timely delivery, provide advice on the right forcing periods and recommend the right tulip varieties. Most bulb growers simply don’t have the capacity for this, she says.

Because of the difference in climate between the Netherlands and Ontario, bulbs need to be treated a little differently to achieve the same results. “In the Netherlands they have higher humidity, darker weather. We have lower humidity, brighter weather,” John explains. “They have to program that bulb differently for us than for them, in order for us to get the height.”

Phytosanitary regulations also differ by country. As Bonne Boots, executive director of exporter Boots Flowerbulbs explains, the Netherlands has a Flower Bulb Inspection Service, an obligatory, fee-based service that checks the quality of the flower bulbs before allowing them for export outside of the EU. To ensure clean, disease-free bulbs, Boots has mechanized the process of cleaning and washing the soil off from the bulbs, as well as sanitation from diseases.

At Jan de Wit en Zonen, they use an x-ray machine that can better reveal any disease-caused damage within the bulbs. “Trust is very big within our business,” says Jan de Wit, one of nine grandsons who have inherited the operations of their grandfather’s business. This is especially true for bulbs, where the grower cannot see the results of the crop until it is grown.

On a global scale, the largest market for Dutch bulb exports is the United States, followed by China, Germany, the UK, Vietnam and Japan. Canada places seventh, says Verdoes. While markets in Germany and the UK have decreased over the years, the US and Canadian markets have risen. The Chinese market is one of the fastest growing ones in recent years.

For bulb exporter Jansens Overseas, about seven per cent of their bulbs go to Canadian growers for forcing. But in addition to bulb distribution, the company also cultivates a portion of the bulbs themselves and sells pre-finished ones to retail outlets. “Approximately three per cent of our retail-ready products go to retailers, big box and garden centres,” says account manager Peter Elstgeest.

“The forcing of tulips is growing enormously, this is big business,” says Verdoes. iBulb has noticed increasing interest in locally produced tulips, driven mainly by the trend towards buying local. But there are also limits to production growth. For instance, the process of increasing the tulip crop volume is slow, says Verdoes, and the bulb crop can also be affected by uncertain weather conditions.

Boots sources from a bulb cultivator located just opposite of their office. Last year, their spring was hot and dry, he says, above the optimally lower temperatures of 15 to 20 degrees Celsius. Many bulb growers didn’t have irrigation systems, leading to fewer bulbs produced per acre that year.

While bulb prices have remained relatively stable for the past 50 years, Boots can’t help but notice that costs such as gas, electricity, labour and transport continue to go up. They need to be more efficient, he says, to meet the rise in demand and still make a profit. Of the bulb crops, tulips are the lowest to produce cost-wise, needing only three to four weeks in the greenhouse. Lilies, by comparison, take three months.

“Pests are not a big concern, so it’s quite a nice crop to grow that way,” says John. There can still be some fusarium in the bulbs, even after initial screening by the bulb exporter, but they try to mitigate the risk by discarding the fusarium bulbs at planting time. Fungicides won’t help any bulbs that arrive damaged, he says. “That bulb’s done.”

Visiting the Tulip Trade Event earlier this year in the Netherlands, John and his team toured the facilities of bulb growers, exporters and forcers to do some variety selection, network and see their growing methods.

“Varieties will degenerate,” says John. “A good variety today won’t be around forever, so we need to find replacements and see what’s coming down the pipe.” But he warns that costs are another important factor.

“You can have a lot of the beautiful, latest [and] greatest varieties. But if there’s not enough acreage being produced yet, then the cost price is too high, [and] we can’t make our margin,” he says. “That would limit us.”

Spring Valley mainly sources their tulips from a couple of exporters, while giving smaller orders to others on a trial basis. Being able to see their suppliers’ facilities makes a difference. “They can come knocking on your door, but when you see their facilities and what they’re capable of, it gives you a better impression of what the supplier is about.”

On the consumer and retail side, interest in tulips doesn’t seem to be waning anytime soon.

“There will always be interest worldwide in tulips and other bulb crop products,” says Elstgeest, noting the relatively stable trends from year to year. “They bring colour, spring, love and joy.”

But there may be an educational piece yet to be shared. Widespread consumer concerns surrounding pesticides could further boost the tulip’s popularity.

“We need to show consumers that we’re working with an environmentally-friendly product,” says Knol of tulips in particular. “The general thinking is that we use a lot of pesticides… We need to find a way to inform the public [otherwise].”