Using two energy screens in the greenhouse helps growers not only save energy, but also allows for greater control over greenhouse climate. Canadian growers can still save additional energy with a light abatement screen as a second energy screen, which is demonstrated by simulation models. 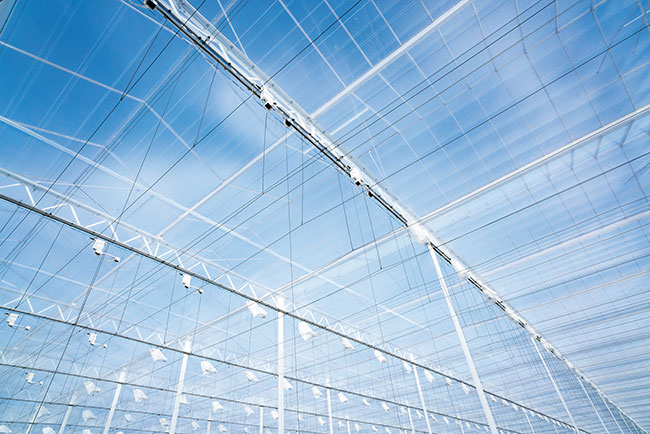 Greenhouse climate screens, or curtains, have been in use in greenhouse vegetable and ornamental crop production for nearly 45 years. Today they are nearly universal in new greenhouse construction, particularly in northern climates where their main purpose historically has been to save energy and reduce the cost of greenhouse heating for the grower. From simple beginnings when first introduced during the energy crisis of the 1970s, curtains have been gradually diversified into the many types available to growers today to both save energy and help control the overall greenhouse climate. These range from transparent energy-saving curtains to full blackout curtains for light abatement and/or photoperiod control. Curtains of varying shade levels, and which diffuse light, are also available both as energy-saving versions and as open-structure curtains allowing airflow (and are meant for use as shade curtains during summer and periods of high light radiation).

Maximizing energy savings in greenhouse production has been on many growers’ minds as energy costs for greenhouse heating have skyrocketed in Europe over the past year. Prices are increasing in North America as well, though in not as extreme of a manner. Regardless, installing a second energy-saving curtain and managing both curtains to maximize energy savings can yield an additional 15-20% reduction in energy consumption for heating over the use of a single curtain. This has become common in the Netherlands and elsewhere in Europe, particularly with multiple transparent (with as high as 89% light transmission) energy-saving curtains for use in unlit vegetable production. Both curtains can be closed overnight to trap as much heat in the greenhouse as possible, and one or both can strategically stay deployed in the morning or at other points in the day to continue to reduce heating demand while not sacrificing light to the crop.

Additionally, two transparent energy-saving curtains can be used in tandem to help optimize greenhouse climate in other ways. Deploying both curtains allows the grower to maintain higher humidity in the greenhouse. This can be beneficial in helping young crops to grow and develop at a faster rate and potentially start to produce sooner. In periods of high radiation, both transparent curtains can be deployed to shade the crop (even two of the most transparent energy-saving curtains on the market will combine together for around 20% total shade). Further, if the curtains close in opposite directions, both can be gapped to allow airflow between them and out to the vents above. This allows for shading to the entire crop, while still allowing greenhouse ventilation in the warmer months. 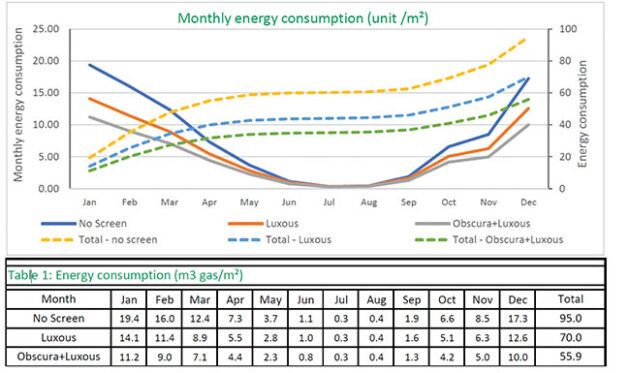 As supplemental lighting gained in popularity in greenhouse production in the Netherlands, growers were eventually required to limit the light emission from their greenhouses. This was accomplished by the installation and use of single layer blackout curtains designed for this purpose. These were typically added as a second or additional curtain layer, on a separate wire bed from the primary energy-saving curtain. Thus, the light abatement curtains could double as energy-saving curtains and help the grower save additional energy. However, in Canada, this practice has not always been followed as light abatement has become an important issue in some parts of the country. Kingsville and Leamington, Ont., both passed bylaws requiring the use of light abatement curtains in greenhouses utilizing supplemental lighting. Many growers retrofitted their greenhouses for compliance by replacing an existing, single transparent curtain with a light abatement curtain. In doing so, they lost an opportunity to increase their energy savings by switching to a double curtain. Below, are the results of a simulation model that quantifies how much potential energy savings is lost by a tomato grower in the Leamington region with this practice. 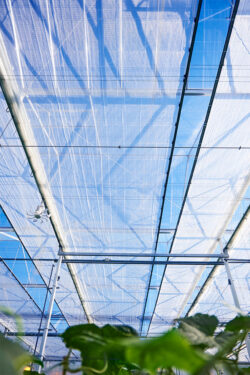 Use of double energy savings curtains in a Dutch greenhouse.

The energy calculator used to calculate these models was featured in an article in Greenhouse Canada’s January 2022 issue. This is modeling software that combines greenhouse parameters with real-world climate data to calculate the amount of energy (as natural gas) required to heat a greenhouse, and then determine the amount of energy saved by using one or more curtains. Thus, the climate of the region around Leamington is incorporated into the simulation comparing the possible energy savings that can be achieved through the use of one transparent energy-saving curtain or light abatement curtain used alone, compared to the energy-savings achieved by using two curtains.  The greenhouse in each scenario in the simulation has the same parameters – same size, gutter height, use of lighting, climate setpoints – and differ only in the curtains utilized.

Double energy-saving curtain installations are commonplace in Europe and have become a necessity for growers there because of skyrocketing natural gas prices. Energy costs in Canada and the U.S., though not nearly as extreme, will continue to trend upward. As supplemental lighting is increasingly a part of greenhouse vegetable and ornamental production in Canada, installation and use of light abatement screens will continue to increase. Utilizing these curtains as a second layer, in conjunction with an already installed energy-saving curtain, will unlock a large reduction in energy consumption for the grower.

Robert Hanifin is a greenhouse climate consultant for Ludvig Svensson and is based in the U.S. Questions on greenhouse energy-saving simulations and curtains? Email him at Robert.Hanifin@ludvigsvensson.com.