This year’s Atlantic Outstanding Young Farmers award recipients look after a number of operations, including greenhouse vegetables. “It would be tough to list all their business enterprises in a single sentence.” 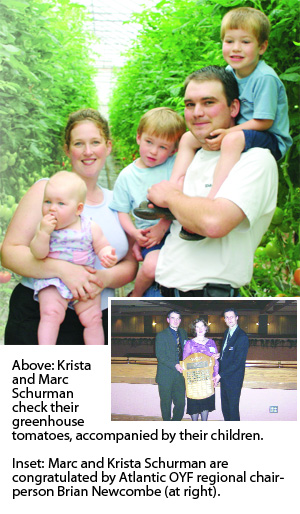 Marc and Krista Schurman set their expectations high on their diversified farm enterprise and it’s paying off for them.

The Kensington, P.E.I., couple are this year’s Atlantic winners in the Outstanding Young Farmers program. They will represent the region at the national OYF event later this year.

In less than 10 years, Marc and Krista have built Schurman Farm Ltd. and Spring Valley Farm Market Ltd. into a thriving, multi-faceted agri-business. Their farming operation consists of a 700 sow farrow-to-finish operation with approximately 11,000 hogs marketed annually, a 300-head capacity beef feedlot, and a hydroponic greenhouse.

They also crop about 250 acres of barley and 180 acres of forage.

And then there is the retail side. Their Spring Valley Farm Market carries some of their vegetables, beef and pork products, plus a garden centre.

“Marc and Krista just never stop innovating. It would be tough to list all their business enterprises in a single sentence. That’s very telling of their drive to seek and fill creative new market opportunities,” said Brian Newcombe, the OYF’s Atlantic region chairperson. “We are so proud to have this family represent the innovation that drives Maritime agriculture.”

Marc and Krista joined Marc’s father on the home farm in 1997 after they graduated from the Nova Scotia Agricultural College. In their first winter farming, they boosted hog numbers to the current level and took the expansion opportunity to implement a biosecurity program.

It was the beginning of their rapid, planned expansion of their farming enterprise.

Low pork prices in the late 1990s led the Schurmans to diversify into the greenhouse vegetable business, specializing in tomatoes, cucumbers and red peppers.

In 2003, their farm market business began selling their vegetables, along with meat products they create including meat pies, corned beef, pickled pork, sausages and beef jerky. A garden centre was added in 2005.

On the production side, soil improvement and water management are important factors that are carefully managed. In 2004, the Schurmans moved into the “natural” meat product market by eliminating almost all antibiotics used in their hog operation and eliminating growth promoting hormones and decreased dependence on antibiotics for their beef.

Marc and Krista are also involved in organizations, take courses to broaden their knowledge and management skills, and travel to learn from other operations. They have three children, twin boys and a girl.

Celebrating its 26th year, Canada’s Outstanding Young Farmers program is an annual competition to recognize farmers that exemplify excellence in their profession and promote the tremendous contribution of agriculture. Open to participants 18 to 39 years of age, making the majority of income from on-farm sources, participants are selected from seven regions across Canada, with two national winners chosen each year.