Researchers are identifying exciting new crops that grow well in the greenhouse and that are expected to find growing and enthusiastic markets throughout North America. 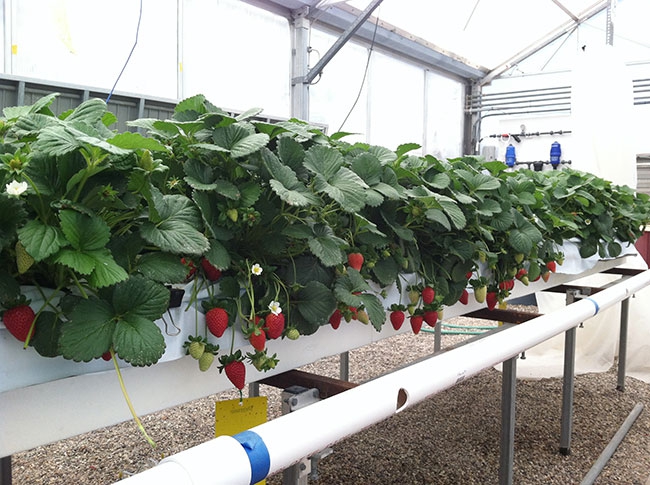 February 2017 – Growing exotic produce in greenhouses has been known since the 18th century, but growers attending the Pacific Agriculture Show (PAS) in Abbotsford, British Columbia, were told not to discount their commercial potential.

Rising immigration and the desire to boost local food options have combined to turn fresh attention on crops not normally seen alongside the standard tomatoes, cucumbers, peppers and lettuces in greenhouses across Canada.

Take strawberries, for example. Typically grown in fields or foraged in forests, they’re seldom seen in Canadian greenhouses. That’s not the case in Asia and Europe, and now Mexico, where growers are adding them to their greenhouses.

“I thought that strawberry cannot be grown in an open field, because living in Tokyo, strawberry is a greenhouse crop,” said Dr. Chieri Kubota, a Japanese-born professor in the School of Plant Sciences at the University of Arizona. She oversees the university’s greenhouse
strawberry research.

“We started this program about six years ago, knowing that we need something else, other than tomato, cucumber or lettuce in the greenhouse.”

Greenhouse berry production focuses on maximizing the value of the end crop and depends on timing, just as with poinsettias.

The cycle begins in May with the preparation of plant material, followed by transplanting of the young plants to the actual production system. Harvest begins in November, just in time for the holiday season when local supplies are shortest and the fruit commands the highest price. The season ends with crop termination in April.

“You have to look at what’s available in what timing, and depending on the varieties, the limitations need to be considered,” Kubota said, emphasizing the need to select varieties that will hit the market at the right time.

Day-neutral and short-day (or June-bearing) varieties are both available for greenhouse production, but both have issues that require attention.

‘Albion,’ one of the most popular varieties in B.C., has been the top day-neutral greenhouse berry to date. It yields large fruit to the tune of eight kilograms a square metre, and checks in at eight degrees Brix.

‘Nyoko,’ an older Japanese variety, had small fruit and lower yields, but exceptional flavour at 10 degrees Brix. Plant management is painful, however, so Kubota continues to seek a short-day match for ‘Albion.’

She transplants the young plants to raised troughs that are easier on workers, and provide a more amenable and forgiving environment for the roots. (Kubota recommends two litres of substrate to accommodate the extensive root systems.)

A pH of 5.5 to 6.5 is ideal, while nitrogen and potassium requirements are smaller than for tomatoes and other greenhouse crops.

“This is for the flowers, the size, and also for the sugar accumulation,” Kubota said. “If you want very flavourful strawberries, you’ve got to look at the [nighttime] temperature.”

Humidity, as in other crops, is critical to ensure plant and fruit quality, and avoid burn at the leaf tips and calyx. Kubota devised an under-the-trough system that maintains an ambient environment around the plants.

“It seems to work really well, except the time we are heating a lot,” she said. “So now we are trying to develop a strategy that even works the nights we have to heat from the beginning of the night.”

QUALITY IS KEY TO MARKET SUCCESS
Since strawberries in North America don’t command the prices seen in Asia, growers need to be cost-conscious when managing their crop.

Kubota said production costs in her test greenhouse are approximately $3.81 US per plant, with one plant per square foot. The break-even price given an average yield of nine kilograms per square metre (1.84 pounds per square foot) is about $2.59 US a pound.

“You need to sell much higher than this, obviously,” she told growers. “If you have to compete with California, you need to create a very niche market – local, niche, flavour-driven, quality-driven market.”

Peter Mitham is a freelance writer in British Columbia.