News
DiMenna is Canadian Produce Person of the Year

Publisher Shannon Shuman of The Packer made the announcement.

Many past recipients of this distinguished award were in attendance for the announcement. “I am thrilled and honoured to be among such a talented group of produce professionals,” said DiMenna. “Being named Produce Person of the Year by the Packer is truly a monumental event in my life.” 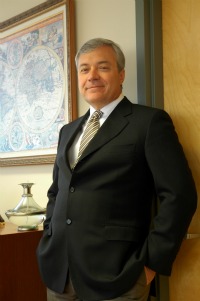 Comments from colleagues include:

• “Jim leads his team by example.”

• “Jim is a true gentleman in every sense of the word.”

• “Jim has an uncanny ability to put you at ease. If Jim says ‘he’ll take care of it,’ rest assured, it’s taken care of. Even when the pressure’s on and the market conditions and outlook couldn’t appear any worse, Jim rises to the occasion and calmly navigates through the toughest challenges.”

DiMenna began selling vegetables door to door from a wagon at age of 10 for a local farmer. From that point on, the produce business was in his blood.

His industry dedication is not limited to office hours as he has volunteered considerable personal time to CPMA committees and projects. He will be CPMA chairman in 2012-13.  Most recently, he’s taken a leadership role in the Produce Traceability Initiative where he holds a position on PTI’s leadership council.

DiMenna’s dedication and passion for the Canadian produce industry has brought him to this memorable day and earned him this very prestigious award.

Jem-D International/JD Marketing is a greenhouse produce company with year-round service to retailers and consumers.