February 12, 2009  By Ontario Federation of Agriculture 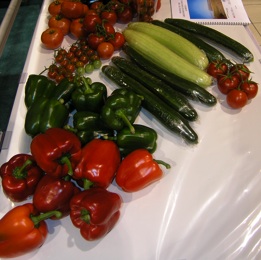 Dig in! Today's Food
Freedom Day
On February 12, the average Canadian will have earned
enough income to pay his or her individual grocery bill for the entire
year.

Feb. 12, 2009 — On February 12, the average Canadian will have earned enough income to pay his or her individual grocery bill for the entire year.

In observing Food Freedom Day, farmers in Ontario and across the country will celebrate their role in providing consumers with one of the safest and most affordable food supplies in the world.

Food Freedom Day is occurring slightly later in 2009 due to the recent rise in the price of food. This bucks the trend of recent years, where the disposable income of Canadians rose significantly faster than the cost of food. However, “thanks to farmers, Canadians still get the best deal in the western world for their food dollar,” says Bette Jean Crews, president of the Ontario Federation of Agriculture (OFA).

In many parts of the world, the cost of food is significantly higher. Member countries within the Organization for Economic Co-operation and Development (OECD), on average, spend 8.3 per cent more of their disposable income on food than Canadians. Australians spend 12.7 per cent more, and the Japanese spend 35.7 per cent more.

In 2008, while prices in some agriculture commodities rose, Canadian farmers continued to take only a very small percentage of the consumers’ food dollar at the store. In 2005, a grain farmer received seven cents for the corn in a box of Kellogg’s Corn Flakes and 11 cents for the wheat in a loaf of bread. Given the processed nature of many consumer foods, it is far more likely that an increase in energy costs played a much larger role in the retail price increase.

Canadians continued to receive high quality food produced at the highest food safety and environmental standards. To ensure that consumers are able to identify Canadian food products and support our agriculture sector, the OFA, together with the Canadian Federation of Agriculture, will continue to advocate for effective ingredient-based "Product of Canada" guidelines that are both informative to the consumer and practical to the agri-food industry.

Crews adds that, “in order to maintain a sustainable local food system, Ontarians need to buy local food and support the agricultural industry.”

Agriculture is the second largest economic contributor and third largest employer in Ontario.

The OFA is the largest general farm organization in Ontario, representing 39,000 farm families.