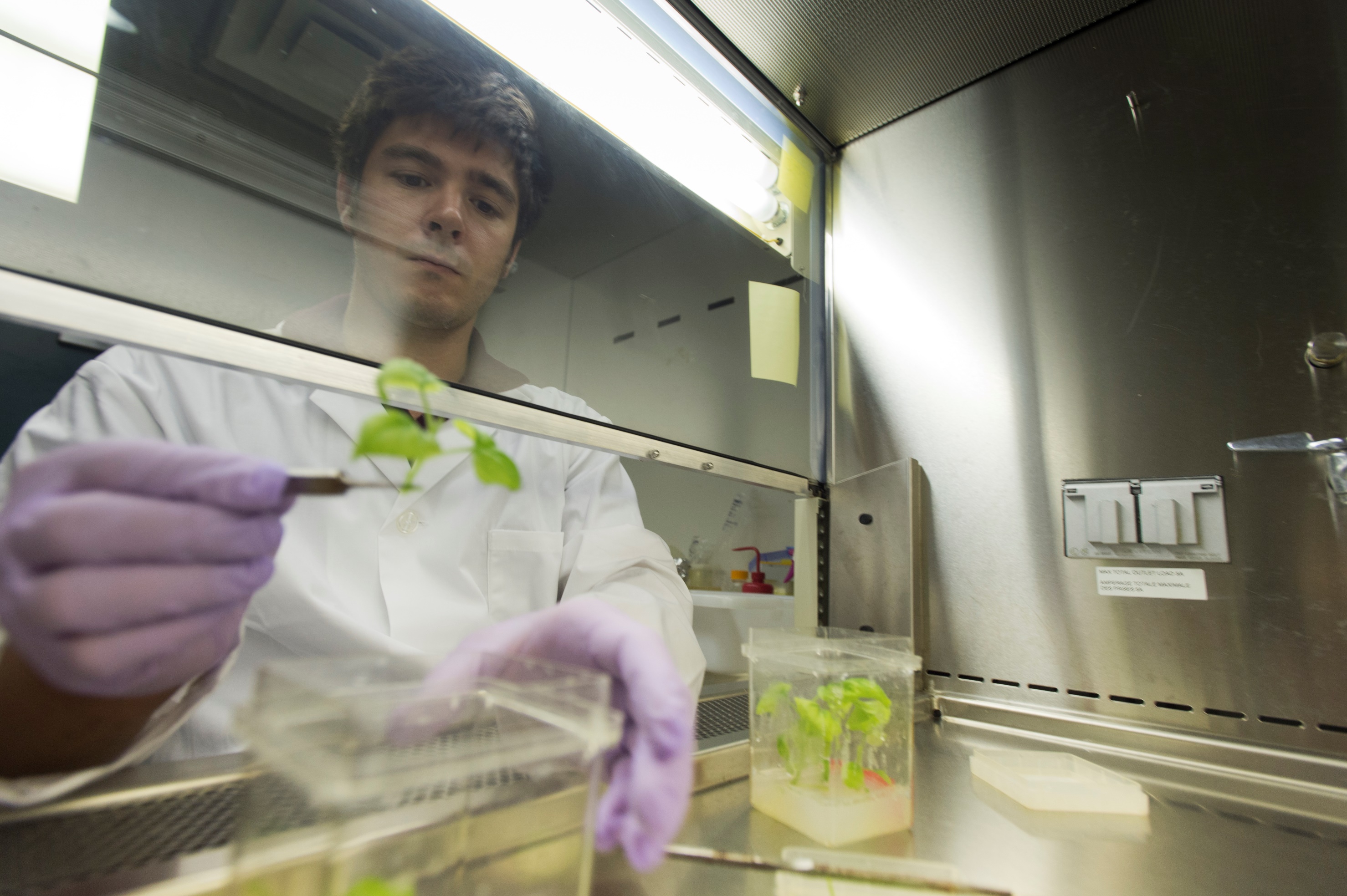 Feb. 20, 2105, Guelph — PlantForm Corporation, a University of Guelph spin-off company, is working to secure funding for more trials of its innovative treatments to combat critical illnesses like cancer.

The plants are grown indoors and, through genetic engineering, made to express certain compounds that are then purified into alternatives to popular drugs like Herceptin, used to treat breast cancer.

“We are now in the final stages of securing a third round of funding that will let us take our best drug candidates forward into animal studies,” explains Don Stewart, PlantForm’s president and CEO.

“We’ve demonstrated efficacy in an animal model, and that’s key to us moving forward with trying to secure funding for clinical trials.”

Significant funds are spent annually around the world on life-saving medications, and being able to produce them more economically could make a great impact on healthcare expenditures.

“We can bring considerable savings to the healthcare system if we can reduce the annual cost of a treatment by 50 per cent, for example,” says Stewart.

“There are often limits to the number of people who can obtain certain drugs because they are so expensive, so this could make treatment more accessible.”

The company is also involved in a project funded through the National Research Council Canada’s Industrial Research Assistance Program (IRAP) and the Bill and Melinda Gates Foundation to produce a low-cost drug alternative to treat HIV/AIDS. Ultimately, Stewart hopes the technology can be transferred into manufacturing directly in places such as Africa, so the drug can be made right where it is needed most.

PlantForm is expanding its Guelph-based operations internationally. Over the last 18 months, they’ve worked to establish a joint venture with PharmaPraxis, a biotechnology company in Brazil, in order to manufacture drugs for Brazil and the South American market. Brazil is currently the seventh largest global market for pharmaceuticals, so this new venture presents great opportunities, says Stewart.

“There is a lot of interest from the Brazilian government in this as they have a nationalized health service and they need to find low cost ways of providing drugs,” he says.

“We are excited about the opportunity in Brazil. We’ve secured initial seed funding of over $1.5 million from an agency of the Brazilian government, and we believe we can create a lot of value around this University of Guelph technology,” he adds.

PlantForm’s long-term goal is to establish two manufacturing sites for their products: one in Canada to serve North America and Europe, and the one in Brazil for South America and Asia. More information about PlantForm is available at www.plantformcorp.com.

This article is one in a series provided by AgInnovation Ontario highlighting innovation in Ontario’s agri-food sector. AgInnovation Ontario is a project of the Agri-Technology Commercialization Centre (ATCC). The ATCC is funded by Growing Forward 2, a federal-provincial-territorial initiative.