Edema (or odema) is a physiological condition in many crops. I have seen it more prevalent in tomatoes and cucumbers, and in bedding plants – especially with ivy geraniums. With cucumbers and tomatoes, it is more common in winter crops. 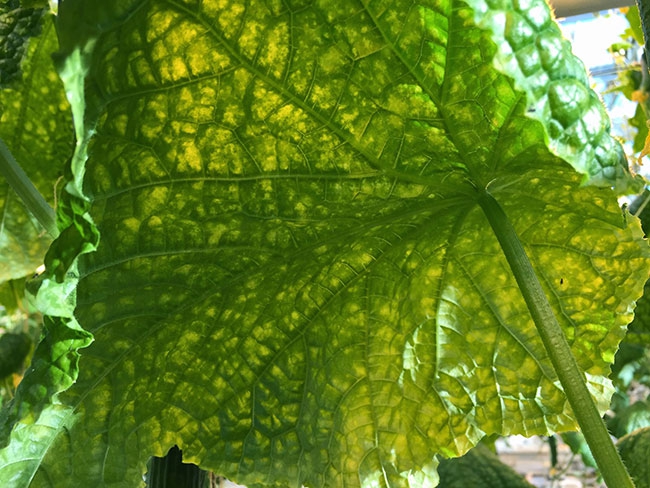 Take a close look for problems each time you’re in the crop.

What happens when edema, powdery mildew, nutritional deficiencies and spider mites hit your cucumber crop at the same time? Of course, if all of the above happens all at once, you are quite frustrated and upset. If it happens when the price is very good, then economically it was very scary as well.

I noticed that during this past winter, the quality of imported cucumbers was very poor especially with mini cucumbers.

Growers must understand the functions of plants are tightly integrated and highly dependent on each other. I always like to give the example of the trace element molybdenum. I call it “holy moly” because it is a trace element that is required in only the smallest of amounts. If iron is 3 ppm, then molybdenum is 0.15 ppm.

If this element is lacking or is not present in sufficient quantities in the nutrient solution, then the conversion of nitrates to ammonium nitrogen in the cells is reduced or cannot take place. So it means that due to a shortage of “moly,” while the nitrates will start building up and the leaves will start turning dark green, further products will not be formed that are needed in plant metabolism and subsequent growth.

So this insufficient amount of “holy moly” will become a limiting factor for growth and production.

This winter I have seen leaf edema in lighted crops. I have seen it before as well, but this time it was serious enough that it seriously affected production. It was far more serious in mini cucumbers than it was with regular Long English cucumbers.

Please check the photos accompanying this article. They clearly illustrate what edema looks like and how it affects fruit quality. One can recognize the symptoms on leaves and also on fruit. As well, you can clearly see how the fruit becomes white and corky inside. Furthermore, there is no taste.

Edema (or odema) is a physiological condition in many crops.

I have seen it more prevalent in tomatoes and cucumbers, and in bedding plants – especially with ivy geraniums.

With cucumbers and tomatoes, it is more common in winter crops. The symptoms in cucumbers start on lower leaves and then progress towards the top of the crop if corrective measures are not taken. The symptoms appear as bumps on leaves and fruit. These bumps are yellow in colour on leaves, and on the fruit they are seen as raised spots.

When the fruit is cut open, you can see it has turned soft and stem ends easily collapse. The shelf life, not surprisingly, is reduced and the taste is “bland.”

I have also found that under severe edema conditions, root development is reduced and nutrient imbalance occurs in the leach.

Sometimes nutritional deficiencies are also associated with edema. It seems that the plant loses its focus for growth.

Once the plant gets weaker and cells burst open, it is then susceptible for powdery mildew and botrytis. I have seen deficiencies of all sorts of nutrient as well, because root growth and development is affected.

Take a close look for problems each time you’re in the crop.

REASONS FOR EDEMA
The main reason is that due to a rapid drop in night temperature, the leaves get cooler but the roots are still pumping water. A pressure is built up in the leaves, but the stomata are closed or are closing. Thus the leaf cells burst open because they cannot withstand the pressure.

CAN EDEMA BE REVERSED?
No, the damage is permanent.

HOW CAN IT BE STOPPED?
It’s important to review temperature ramping from day to night. Adjust temperature decrease rates to

1C/hour. Many growers attempt to drop temperatures very rapidly by opening the vents. Check leaf temperature frequently if screens are being used.

Fine-tune irrigation volume and timing. The last watering should be at least two hours before sunset or when the supplemental lighting is turned off.

Take a close look at the leach coming out. Many growers assume that plants require the same amount of water as they do with natural light. Higher feed and leach EC should be helpful to create reasonable osmotic pressure in the rootzone. I suggest increasing the feed EC by using additional potash from potassium sulfate.

Growers know very well that calcium is bivalent, chemically speaking, meaning that it has two positive charges ca++. Thus, due to these two positive charges, its movement within the plants from roof to the cells in the leaves is strictly dependent on transpiration. The calcium is also classified as an immobile element, that is once it is fixed in the cell walls as calcium pectate, then it cannot be re-dissolved and moved to newer growth where it is most needed. This calcium deficiency can only be corrected when active transpiration is established. Since moisture deficit is related to temperature and relative humidity, growers should ventilate aggressively and use screens wisely. And remember the temperature and relative humidity are related with each other. For each one degree centigrade change in temperature, the relative humidity changes by five per cent.

Dr. Mohyuddin Mirza is an industry consultant. Contact him at drmirzaconsultants@gmail.com.