Dakota Gold: a Texas Superstar ‘weed-to-riches’ story
'Dakota Gold' helenium had a tough
childhood. Cast into life as a common weed, it had to survive abusive
Texas
summers, frequent and brutal right-of-way mowings, trompings in
over-grazed
pastures, and abandonment in empty lots.

May 14, 2010, College Station, TX — ‘Dakota Gold’ helenium had a tough
childhood. Cast into life as a common weed, it had to survive abusive Texas
summers, frequent and brutal right-of-way mowings, trompings in over-grazed
pastures, and abandonment in empty lots.

Worse, it just got no respect, having been stuck with the ignoble name of
“yellow bitterweed,” said a Texas AgriLife Research horticulturist.

But along came science. One day in the mid 1990s, that same AgriLife
Research horticulturist, whose name was Dr. Michael Arnold, mentioned to some of his
graduate students that bitterweed, with its lovely yellow blooms, would, with a
little tender, loving care, make someone a good environmentally friendly
ornamental.

“In typical student fashion, they suggested we do just that,” Arnold
said.

Arnold and his students’ work eventually resulted in ‘Dakota Gold’ being
named a Texas
Superstar, one of five for 2010, Arnold said. After rigorous
testing, AgriLife Researchers and Texas AgriLife Extension Service
horticulturists designate plants as Texas Superstars that are not just
beautiful but perform well for Texas consumers and growers.

Arnold’s rationale for yellow bitterweed’s potential was along the lines
of what doesn’t kill something makes it stronger. In the case of yellow
bitterweed, the glaring sun and heat of Texas summers had already begun a
natural selection process. Bitterweed needed little water or other resources,
making it a potential low-input plant for cultivated landscapes, he said. And
the frequent mowings along College Station roadside rights of way had already
constituted a sort of “un-natural” selection process for a shorter, more
compact plant.

The first stage of the process was to collect a variety of plant
materials.

“We basically just went around and got seeds from along different street
locations where it had been mown as a roadside weed,” Arnold said. “The idea
was it kept the plant at a lower height so it would tend to help us get to our
selection of wanting plants that had a compact low-growing habit analogous to
traditional bedding plants.”

Arnold and his students used a plant breeding method called “open
pollination recurrent selection.” This pretty much involves what the term
sounds like if you give it a little thought, Arnold explained. Selected plants
are grown outdoors and are allowed to be cross-pollinated by natural means, by
insects or birds or the wind, bees being the most common mechanism. Crosses
with favourable traits are kept; unfavourable ones rejected. The selection
process is done for several seasons, about 10 years in the case of ‘Dakota
Gold.’

The process has advantages and disadvantages, he said. One advantage is
that it doesn’t require a lot of labour. A disadvantage, particularly when the
plants are grown outdoors in the region where there are plants of a related
genotype, is the selections may be contaminated with the pollen of plants that
have unwanted traits.

“Problem is, you’ll make selections for the characteristics you want, and
then the bees will bring in pollen of other plants,” Arnold said.

The alternative is controlled pollination, which is usually done within a
greenhouse, where bees can be excluded and the contamination prevented.

After years of the open pollination, Arnold and his students selected
plants with the low-growing, spreading habit commonly preferred for bedding
plants. They also selected plants that had more flowers, another important
feature for landscaping.

At this point, however, their protege was ready to graduate and make its
debut into the outside world. To do so, it needed opportunities that Arnold and
his students couldn’t give it at the campus breeding sites, so Arnold and Texas
A&M licensed the improved breeding lines to Ball Horticultural
Co., an international company that does business in 20 countries. 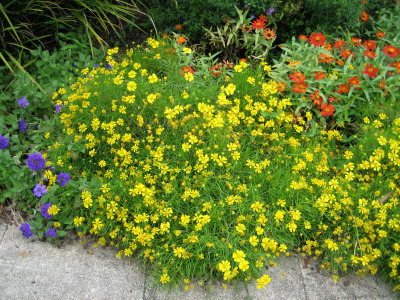 Ball Horticultural further improved the lines, and did so in only two
years. The company could do this, Arnold said, not only because it had more
resources, but because it had breeding sites far removed from the plant’s
native habitat of central Texas. This meant there was little danger of the improved
breeding lines being contaminated by the pollen of wild cousins.

Ball also found, Arnold said, that ‘Dakota Gold’ did quite well outside
of Texas. It was grown successfully as far south as Florida and as far north as
Chicago.

Another requirement for Texas Superstars is that they be easy to
propagate. The rationale for this is if AgriLife Research and AgriLife
Extension horticulturists are going to promote a new cultivar to the general
public, there must be enough plants at a reasonable price to meet the demand,
Arnold said.

IT REQUIRES A LIGHT SUBSTRATE WITH GOOD DRAINAGE

“For greenhouse and nursery producers, it is important to grow ‘Dakota
Gold’ in a light substrate with good drainage that does not contain large
proportions of peat moss,” Arnold noted in his official report.

For home landscapers, it is just as important not to over-water. Because
of its beginnings, the plant likes lots of sunshine and tolerates heat very
well.

“So pick a sunny spot for her,” he said.

Unlike its roughshod cousins, ‘Dakota Gold’ will initially grow as “a
tight, flattened rosette of coarse foliage,” Arnold said. Later, it becomes
more erect and the foliage more “highly divided and finely textured” as it puts
up flower stalks.

As it matures, ‘Dakota Gold’ turns into a real “princess” of a bedding
plant, with a gown of dark, green circular foliage 12-18 inches in diameter,
and crowned with bright yellow flowers that are reminiscent of daisies, he
said.

Texas Superstar is a registered trademark owned by AgriLife Research.

Robert Burns is a
communications specialist with Texas A&M University.