Schafer Side Road, located just a concession or two west of the town of
Delhi (pop. 4,000), is a long way from the bustling flower auctions of
the Netherlands and from one of the most diversified horticultural
operations in Saudi Arabia. 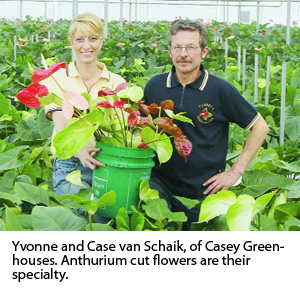 Schafer Side Road, located just a concession or two west of the town of Delhi (pop. 4,000), is a long way from the bustling flower auctions of the Netherlands and from one of the most diversified horticultural operations in Saudi Arabia.

But this quiet, rural concession road in southwestern Ontario is home to a cut-flower grower who used to work in the Dutch auctions and the Middle East.

Case and Yvonne van Schaik established Casey Greenhouses on Schafer Side Road shortly after emigrating from the Netherlands several years ago.

Both have horticulture backgrounds, though Yvonne stuck closer to home throughout her career. She worked for many years in the flower export sector in the days before the current shipping ease afforded by the European Union. Back then, each country had its own documentation requirements, and Yvonne specialized in export paperwork.

Case started out in the industry as a carnation grower before accepting the opportunity of working for 18 months in a sprawling Saudi Arabian greenhouse complex that grew cut flowers, potted plants and vegetables. (Combined with an adjacent dairy operation, some 1,500 employees worked at the farm!)

Upon completion of this contract, Case returned home and worked a total of 14 years at the Aalsmeer and FloraHolland flower auctions.

Casey Greenhouses is a one-acre anthurium cut flower greenhouse, one of only two such operations in the province. It was originally a pepper facility when the van Schaiks purchased it, and they continued with the crop for about two years before realizing they were not large enough to remain viable in peppers.

They studied a variety of alternative crops before settling on anthurium cut flowers, and gradually transferred production over to the new crop. They even grew asters during this time of transition while the peppers were eased out. “By 2004, we were completely in anthuriums,” says Yvonne.

Casey Greenhouses is a dream-come-true for them. There was no chance of starting their own greenhouse business in the Netherlands, given the shortage of available – and affordable – land. Canada, however, offered many exciting opportunities.

Their farm is a little off the beaten track of greenhouse regions in the province, but still less than a two-hour drive to wholesalers in Niagara and Toronto who are increasingly finding new customers for this intriguing flower.

“To have stayed in peppers, we would have had to become much bigger,” Case explains during my visit in early spring.

They wanted to grow something different, a plant in which few others were specializing. Anthuriums fill a niche market that’s still developing.

This is a challenging crop. Beginning with tissue culture plants from the Netherlands, it can take a year to a year-and-a-half for the plants to mature. A plant yields only five or six flowers each year, though it remains productive for several years with proper and constant care.

“It’s a very labour-intensive crop,” says Case, both in the growing and the packing.

The flowers are as delicate as they are beautiful. (If the Academy Awards were focused on flower arrangements instead of movies, anthurium would only be found in the starring role categories. It stands out in any presentation.) The flowers are handled gingerly during harvesting. They are carefully carried – at most two or three at a time – out of the rows and immediately placed in water buckets.

They are then meticulously hand-packed. The flower and heart-shaped spathe are covered in protective cellophane, and each flower and stem is then taped to the inside of sturdy shipping boxes. Each stem is fitted with a water tube, which includes plant food.

Flowers are harvested according to orders received that same day from wholesalers. They are then packaged and driven to the wholesaler either later that day or the next day.

“About 50 per cent of the labour costs are in the packing,” says Case.

Anthuriums are popular holiday crops. Given its heart-shape spathe and an abundance of red varieties, it’s a natural for Valentine’s Day. The green varieties are ideal for St. Patrick’s Day. The oranges and browns are perfect for Halloween and/or autumn arrangements.

Its distinctiveness also makes it popular for both weddings and funerals.

Two fully automated multi-fuel boilers were installed about 16 months ago to cushion the impact of rising natural gas prices. Corn was the first fuel source. However, they have since switched to oat hulls, a food processing byproduct that burns efficiently and has relatively good price stability.

The natural gas boilers are still used for early morning heating applications, but the multi-fuel boilers carry the main load. Case estimates the new boilers have cut heating costs by about half.

“It requires more work to maintain them,” he says. The ash bins are emptied twice a day. But he’s quite impressed with their automation and cost-savings. “You have to do something to save on energy costs. Natural gas is not getting any cheaper.”
The anthurium doesn’t face any unusual disease or pest pressures, notes Case. Since harvesting throughout the greenhouse is carried out each day, they are always on top of potential problems.

Beginning with the first crop, Case and Yvonne have set high quality standards. I was shown a pail of “seconds” and was hard-pressed to detect a single flaw in some of the flowers until they were pointed out. (And even then I had to look very long and very carefully.)

The greenhouses are spotlessly clean. Case says this is so important for minimizing disease risks.

Casey Greenhouses produces 23 varieties and 16 colours year-round. Many of their varieties are not available from producers in Hawaii, Costa Rico or Mexico.

Sales are still slowly growing and the hours are long. But Yvonne and Case are enjoying the business. “We love it here,” says Case, noting the gently rolling countryside and abundant woodlots. They are also only a short drive to the picturesque Lake Erie shoreline.

Anthuriums are still not widely known in the market. “When we first started, it was a little scary,” admits Yvonne. It’s probably like what cut gerbera was like about 10 to 15 years ago, she adds, and that crop is now quite popular.

Anthurium’s potential in other regions is well known. The Netherlands, for example, has about 250 acres of production. It is also the most important cut-flower crop in Hawaii, with annual sales by growers in the state pegged at some $4.7 million US.
Case and Yvonne are actively promoting the product. They’ve supplied flowers to designers working at Canada Blooms and on a variety of TV shows in the Toronto and Niagara regions. They also have a website. “These are all good advertisements,” says Case.

Their flowers are being enjoyed by consumers as far away as Halifax and Winnipeg, and in the U.S.

Casey’s Greenhouses has plenty of room to expand, as the farm includes 24 acres in total. But the van Schaiks are growing their business carefully.

“Any growth (expansion),” says Case, “will depend on the market.”