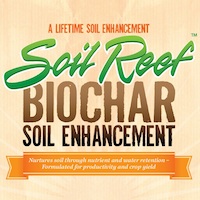 In 1541, Spanish conquistador Francisco de Orellana, led a famous expedition of the Amazon. He returned boasting tales of a massive areas of rich, black earth. Other expeditions hunted for evidence of these Mayan civilizations, each came up empty handed, until recently.

Soil science has proven that de Orellana was not hallucinating. By burning woody biomass, creating a char-like substance, and burying it in the soil, these Indian farmers created extremely fertile soil. This char-like substance is called biochar.

Until now, biochar has not been available commercially in the United States. Last year, The Biochar Company licensed a patented process to produce a biochar called Soil Reef™ on a commercial scale.

Soil Reef™ creates biochar with an age-old process called pyrolysis that bakes uncontaminated wood by cooking it at high temperatures with no oxygen in a controlled container. This process sequesters about half the carbon in the biomass and reduces it to pure biochar, one of the key ingredients in rich soil.

According to biochar pioneer Lopa Brunjes, Director for The Biochar Company, LLC and TEDx speaker, biochar is a vital for improving marginal or degraded soils.

"The tiny pores in the biochar create a habitat like a coral reef for microorganisms to thrive in the soil. It builds soil structure and thus prevents erosion," she explains. "Biochar helps soil retain water and nutrients, creating plants with more life."

She says this ultimately increases crop yields, grows healthier plants that are more resistant to disease, and reduces annual dependency on fertilizers.

"Just one application of biochar benefits the soil for generations to come," says Brunjes, who sits on the advisory board of the International Biochar Initiative . "Though adding biochar year after year, as the ancient Amazonians did, produces a cumulative benefit."

Leading the U.S. industry in producing biochar for consumer use, Soil Reef™ is using proprietary technology to create a superior product for the garden.

"Another payoff is that gardeners who use Soil Reef™ can actually help combat climate change", Brunjes explains. "Biochar reduces carbon emissions by sequestering carbon in the soil for on the order of a thousand years. It basically puts the carbon back, where it belongs-in the soil." It makes viable use of waste and can produce sustainable energy in the production process.

Watch Lopa Brunjes at TEDxBerkeley- explaining how Soil Reef is an ancient solution to a modern problem
in the video below:

Brunjes exclaims, "With concerns about soil erosion mounting, I believe biochar is going to be as important for the 21st century as fertilizers were for last century!"
Soil Reef™ comes mixed and ready to use, with Organic Mechanics® Compost and worm castings, and is now available at fine garden centers. Pure biochar, to mix how you choose, is available at www.soilreef.com .