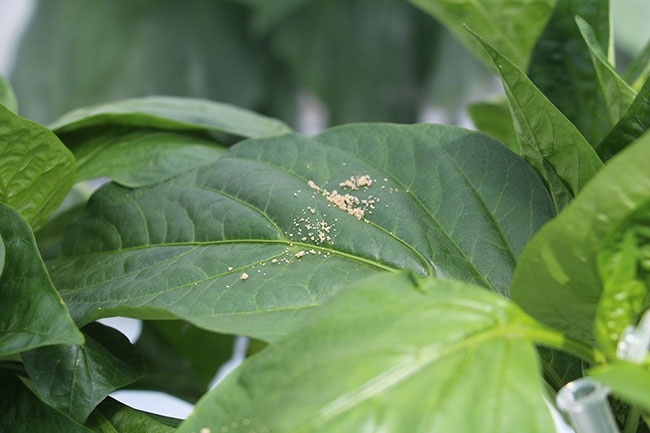 For greenhouse operators, managing crop pests can be both time-consuming and costly, with expenses ranging from thousands to millions of dollars annually. In particular, the need to apply specialist biocontrol agents on a regular basis just to manage a couple of targeted pest species has growers yearning for more cost-effective alternatives.

For this reason, generalist predatory biological control agents have recently gained popularity as they offer a means of controlling a wide assortment of pests.

Remarkably, these agents can also sustain their populations by consuming other non-pest food types, meaning that these predators can be applied even before a pest prey is present on the crop. Having an active and well-fed population of beneficial bugs offers a better, preventative way to protect crops from threats of invading arthropod pests. Consequently, recent research has focused on identifying supplemental, alternative food types that can be used to achieve earlier and more durable crop protection by generalist predatory bugs.

A standing army of Canadian bugs
To date, research and application of supplemental foods for improving generalist predator crop establishment has mostly focused on European crops and biocontrol species. However, for researchers and growers in Canada, it is very important to be able to distinguish the relative values of these food types to predators commonly used here. As a result, recent studies led by a research group at Agriculture and Agri-Food Canada’s (AAFC) Harrow Research and Development Centre have shed light on how native North American generalist predators respond to various supplemental food sources.

AAFC researchers began to investigate the value of supplemental foods for two native biocontrol agents – Orius insidiosus, which is considered an important agent for the suppression of thrips on a variety of crops, and Dicyphus hesperus which is recognized as an excellent predator of whiteflies on tomatoes and other crops.

In these trials, three different supplemental food types were tested for whether they improved the fates of predator populations. These foods include the eggs of the Ephestia flour moth, decapsulated cysts of the Artemia brine shrimp, as well as Typha cattail pollen. Combinations of these different food types were also assessed including a diet consisting of one part Ephestia eggs to five parts Artemia cysts.

Dicyphus
For the Dicyphus predator, a combined diet of Ephestia eggs and Artemia cysts improved the survival of its immature stages most significantly, with 83 per cent more predators making it to adulthood relative to unfed predators in lab trials.

Compared to Dicyphus that fed only on whiteflies in the greenhouse, predator levels were more than seven times higher when fed Ephestia eggs, making them much less vulnerable to a population crash common to underfed predators. However, the costs of using Ephestia eggs on a larger scale can be quite high due to technical challenges in producing them.

With this in mind, Artemia cysts offer particular value in commercial settings. In Europe, Artemia cysts cost approximately three per cent of the price of pure Ephestia eggs. Compared to Ephestia eggs, Artemia cysts have been shown to contain equal or higher levels of protein, but three times less fatty acid content. Combining this relatively inexpensive food source with Ephestia eggs also improved Dicyphus establishment by over four times in this study, relative to predators that were only offered whiteflies as a food source. Thus, while Ephestia eggs are very nutritious, it may be more practical to include Artemia cysts in the predator’s food source over the entirety of a greenhouse crop.

Orius
In the case of Orius predators, this species performed well on both Ephestia eggs and pollen, especially in lab trials where these foods led to an 80 per cent improvement in survival for predators. In the greenhouse, the Ephestia egg and pollen combination also offered a 3.2 fold increase in predator population size relative to predators fed with thrips only. Overall however, Orius predators did not benefit as much from supplemental foods in the greenhouse relative to Dicyphus predators.

Interestingly, despite that pollen is known to be nutritious to many predator species, applying this food onto crops can be tricky. Because thrips are attracted to pollen, applying this tool can backfire when thrips populations are already very high. As with its use for improving predatory mite population growth, generally only when strong predator populations are already well established would such a food type help improve the overall balance of predators and pests. Therefore, when pest densities are high and predator numbers are low, using supplemental foods other than pollen may provide a better overall result.

From Europe to Canada
Currently, supplemental foods are slowly becoming commercially available to growers in Canada with pollen and Ephestia eggs readily available from a number of companies. However there is still some work to be done towards making Artemia cysts available to local distributors. With this said, once available, these foods can be applied to the crop in a number of ways. These include the direct broadcast of supplemental foods onto crops with blowers, or the application of Artemia ribbon rolls, which follow the direction of rows and are placed just below the growing plant tip where they will be readily accessible to predators. Ephestia eggs are also available on cardboard hanging cards much like those that are commonly used for the distribution of whitefly parasitoids. These two last types of distribution systems also prevent wasting supplemental foods that tend to fall to the ground where they are out of a foliar predator’s reach.

Overall, such new tools can both promote improved predator establishment and distribution on a crop, potentially translating into considerable savings for growers applying biocontrol agents in Canada. Growers looking to try out this new technique should reach out to their local biocontrol supplier or provincial extension specialist for more information.

Acknowledgements
This work was collaboratively funded through the Agri-Innovation Program project P-029 by Ontario Greenhouse Vegetable Growers and AAFC. All images courtesy of AAFC.

Roselyne Labbé, PhD, is a research scientist in greenhouse entomology with Agriculture and Agri-Food Canada. She can be reached at roselyne.labbe@canada.ca. For more, see her presentation the 2019 Canadian Greenhouse Conference on Oct 9.