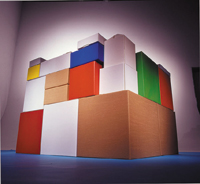 We tend to take the simplest things in life for granted. How about the sustainability of a corrugated box?

Immediately think of a chainsaw? Talk about misleading! In fact, only 12 per cent of Canadian boxes, on average, are actually made from freshly cut trees. The balance is made from recycled paper and board, or wood chips, shavings and sawdust left over from logging and sawmilling operations whose primary purpose is supplying lumber for houses, hospitals and, yes, greenhouses. (1)

And despite broad public misconceptions, only a tiny amount of Canada’s forestlands is actually harvested by the forest products industry every year – less than half of one per cent, according to the latest federal government report (The State of Canada’s Forests). Check it out for yourself at the website mentioned later on in this feature. Forest fires burned almost twice as much forestland. Insects and beetles defoliated an incredible 14 times more!

And trees are a renewable resource. By law, all forests harvested on Crown land must be successfully regenerated. About 85 per cent is currently regenerated naturally, while the remainder is restored through tree planting. Indeed, Canada has embraced, and leads the world in, the adoption of sustainable forest management systems. Almost 90 per cent of Canada’s managed forests are now third-party certified to one of the three internationally recognized sustainable forest management standards: Canadian Standards Association (CSA); Forest Stewardship Council (FSC); or Sustainable Forestry Initiative (SFI). All this information is in the latest federal government report. (2)

Let’s look at another indicator – energy usage. Almost 60 per cent of the energy needs of the major forest product companies in Canada are being met by renewable resources, mostly through wood residue and other biomass from certified forests, and cogeneration, which means that some mills, in fact, have the potential to be net energy producers. This strategy of substituting biomass for fossil fuels and using less emissions-intensive natural gas has seen pulp and paper mills reduce their aggregate greenhouse gas emissions by a whopping 44 per cent since 1990. We don’t know of any other industry sector that can match that!  (3)


SOURCE REDUCTION
Some ways to use less paper in a box include eliminating or reducing
layers, introducing “high performance” board or kraft paper (making it
lighter), reconfiguring flaps, and removing air space between the
product and its packaging. Corrugated companies have been doing things
like this for years, reducing their production costs and trying to gain
advantage over their competitors. One celebrated example of source
reduction was the industry persuading the Railways Association of
Canada to change its design rules for corrugated containers shipped by
rail, slashing the amount of paper fibre needed by 100,000 tonnes
(permanently). It doesn’t make sense to produce more than we need. (4)

In some supplier-to-factory circumstances, the same corrugated box is
used again and again (we call them re-trippers), but it is in recycling
that corrugated excels. Corrugated is by far the most widely recovered
packaging material in Canada with a national recovery rate estimated in
the 80 per cent range (up from 69 per cent in 1996). Residential
recovery of old corrugated containers (OCC) has also increased
significantly over the years, with Ontario reporting a 77 per cent
household recovery rate in 2006. (5)

The average recycled content of corrugated shipped domestically has
also jumped from 45 per cent in 1988 to 66 per cent in 2006. Some 65
per cent of Canadian packaging mills now manufacture board from 100 per
cent recycled materials. (6)

When corrugated recycling is not practical – it may be too far to
the nearest recycling mill – then composting may be an option. The
cellulose (or carbon source) in corrugated can be balanced with
nitrogen sources (for example, food scraps) to make commercially
acceptable compost. The industry’s environmental arm (Paper &
Paperboard Packaging Environmental Council , or PPEC) pioneered the
composting of waxed corrugated boxes through McGill University in the
early 1990s, proving that a more preferable environmental solution to
disposal was indeed available. (7)

There’s a lot more to that simple corrugated box than environmental
benefits. The $3 billion Canadian industry allows all sorts of
manufacturing sectors (including horticulture) to both receive supplies
and to ship products across Canada and worldwide. It’s been doing this
for over 100 years, playing a vital role in product distribution and
the Canadian economy. Corrugated is a cost-effective material. It is
lightweight, functional, versatile and custom-designed, allowing for
minimum use of material and maximizing cube efficiency in trucks.

Sustainability also includes consideration of socially desirable
factors. There are almost 100 box and sheet plants across Canada,
supplying shipping services to local industries and towns and cities,
and jobs and benefits to over 15,000 employees and their families.
Overall, that humble little box has quite a powerful story to tell. If
only it could talk …

1. PPEC analysis of packaging grades based on data supplied by the Paper Recycling Association.

2. The information on Canada’s forestlands, regeneration and third-party certification comes from The State of Canada’s Forests, Annual Report 2007, Natural Resources Canada, at http://canadaforests.nrcan.gc.ca/rpt .

5.  The 80 per cent is a PPEC estimate for 2006. The 69 per cent figure is from the National Packaging Survey (1996) commissioned by the Canadian Council of Ministers of the Environment. The Ontario residential number is from Stewardship Ontario for 2006.