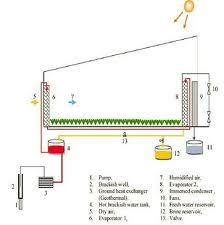 A schematic of a geothermal greenhouse, courtesy of The University of Queensland's (Australia) 'Geothermal Energy Centre of Excellence.'

Lisa Brodeur of 360 Energy recommends an open mind with energy management. “When new technologies appear, you may not want to be the first to jump on the bandwagon, but you will want to seriously consider those that may improve your organization’s bottom line.”

“Just look at technological advances in crops for a moment.

Genetically modified organisms (GMO) have been studied extensively in the European Union (EU) since they implemented an import ban on GM corn, soybean and canola in the early 1990’s.  The latest results from the 24 EU long-term studies show that there are no significant risks to humans and animals from consuming genetically-modified crops – and that they are nutritionally equivalent to their non-GMO counterparts.

With the release of these findings, transgenic tomatoes may find a place in crop rotations sooner rather than later. When that time comes, be sure to evaluate how changes in production might affect your energy input and consumption. Will new crops require more/less water, light, CO2, and so on? All these items will impact the final production costs – all due to changes made to a plant’s genes.

Some newer energy technologies that may be worth considering for your operation include geothermal systems and new high-efficiency solar panels (once they are allowed to be imported into Canada). Stay tuned to Energy Edge for more on these technologies.”


Lisa Brodeur is a Quality Assurance Supervisor at 360 Energy.