Features Crops Flowers
Combinations That Are Sure To Sell Well

Native plants and combos are a perfect pairing 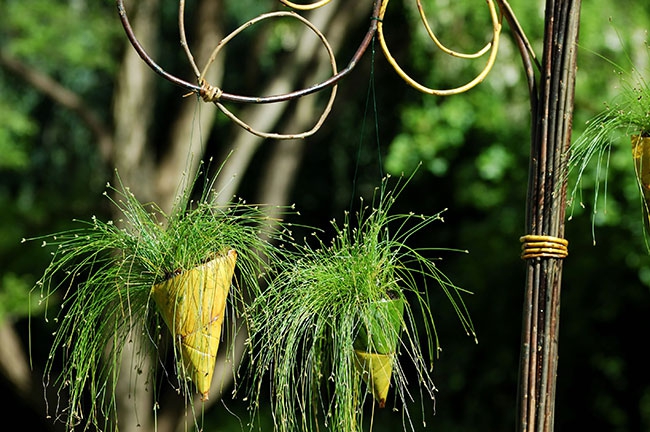 For small pots, Isolepis makes a petite yet powerful choice.

August 2015 — Quick, name some hot-but-established trends in horticulture right now. You probably just came up with five or six, right?

And I’ll bet one of them was “natives,” and another was “container gardening.” Am I right? If not, you should add those to your list.

So what’s the next logical step? Combine them. There’s absolutely no reason not to grow natives in containers. One of the most endearing qualities of natives is their adaptability, and they can thrive in pots as well as the next category – better than some!

One thing I like to tell people is that if they have a well-rounded perennials program, or a diverse garden, they’re already growing North American natives. Many gardeners and even growers don’t realize it, but many of the established, traditional perennials in the trade originated right here, long before anyone called their home Canada or the United States.

Everybody knows some native genera. Echinacea and Baptisia are sort of no-brainers, as are the big and little bluestems, Andropogon and Schizachyrium. But a surprising number of folks are surprised to learn that other favourite genera, like Phlox, Coreopsis, Gaillardia and Rudbeckia also have their roots here. This fact applies even to some venerable varieties with foreign variety names just as tongue-twisting as Latin.

Phlox paniculata “Franz Schubert” was selected by the late great English plantsman Alan Bloom, who named it for his favourite composer. Many varieties, now quite obscure and long gone from the market, sport names like “Dorffreude” and “Rijnstroom.”

Still not convinced? Consider Rudbeckia fulgida “Goldsturm,” a former Perennial Plant of the Year. Carl Linnaeus himself named the genus for his teacher, botanist Olaus Rudbeck of Sweden.

Those are just two of many natives that went to Europe for an education and returned to the Americas with Old World monikers. And it may be a digression, but it’s a digression to make a point: there’s no need to think of perennials and native perennials as two different categories. Natives get along fine in containers. You can even mix them with non-natives and call it your “Melting Pot” collection.

Native grasses, sturdy denizens of the windswept prairies, might not be front of mind when you’re conjuring combos. But Panicum virgatum, switchgrass, is a great choice, especially for large containers. There are many varieties, in a wide range of colours, sizes and habits, so they’re not all interchangeable!

If you need an upright accent, “Northwind” and the taller “Heavy Metal” will work. If you need upright form, smaller stature and red blades, “Hot Rod” is the ideal selection. “Ruby Ribbons” is also splendid, but taller, with a more relaxed habit and less red colour.

For small pots, Isolepis makes a petite yet powerful choice.

Schizachyrium, “Little Bluestem” is also a good choice but can be floppy. A recent introduction, “Standing Ovation,” solves that problem, standing at attention while others relax.

For small pots, Isolepis, fibre optic grass, is a cute, fun choice. I’m cheating a bit here: I. cernua is a cosmopolitan species that can also be called native in Africa and Asia.

It’s not all about grasses, of course. Among herbaceous perennials that make good pot candidates, Echinacea is an absolute standout – especially the new, multicoloured, long-flowering varieties like “PowWow” and “Cheyenne Spirit.” Stokesia laevis works beautifully, but the colour is more transient. For lasting flower power, try Gaura and Gaillardia.

I’d love to recommend one of my favorites, Lewisia; it makes a great pot plant, which is how it’s sold in Europe.

Your clients needn’t be too quick to pull these containers indoors at summer’s end except in the harshest climates. The show’s not over. The chill of autumn (and even early winter) brings on spectacular foliar colour, especially in Schizachyrium and Andropogon. Within reason, storage above freezing is almost as much about protecting the container as saving the plants.

On second thought, you know what? There is one good reason to differentiate between native perennials and grasses and non-natives, and it goes back to where we started: Natives are trendy. Container combos are trendy. Wedding the two is as natural as blending Echinacea and Panicum – and it’s just good marketing.