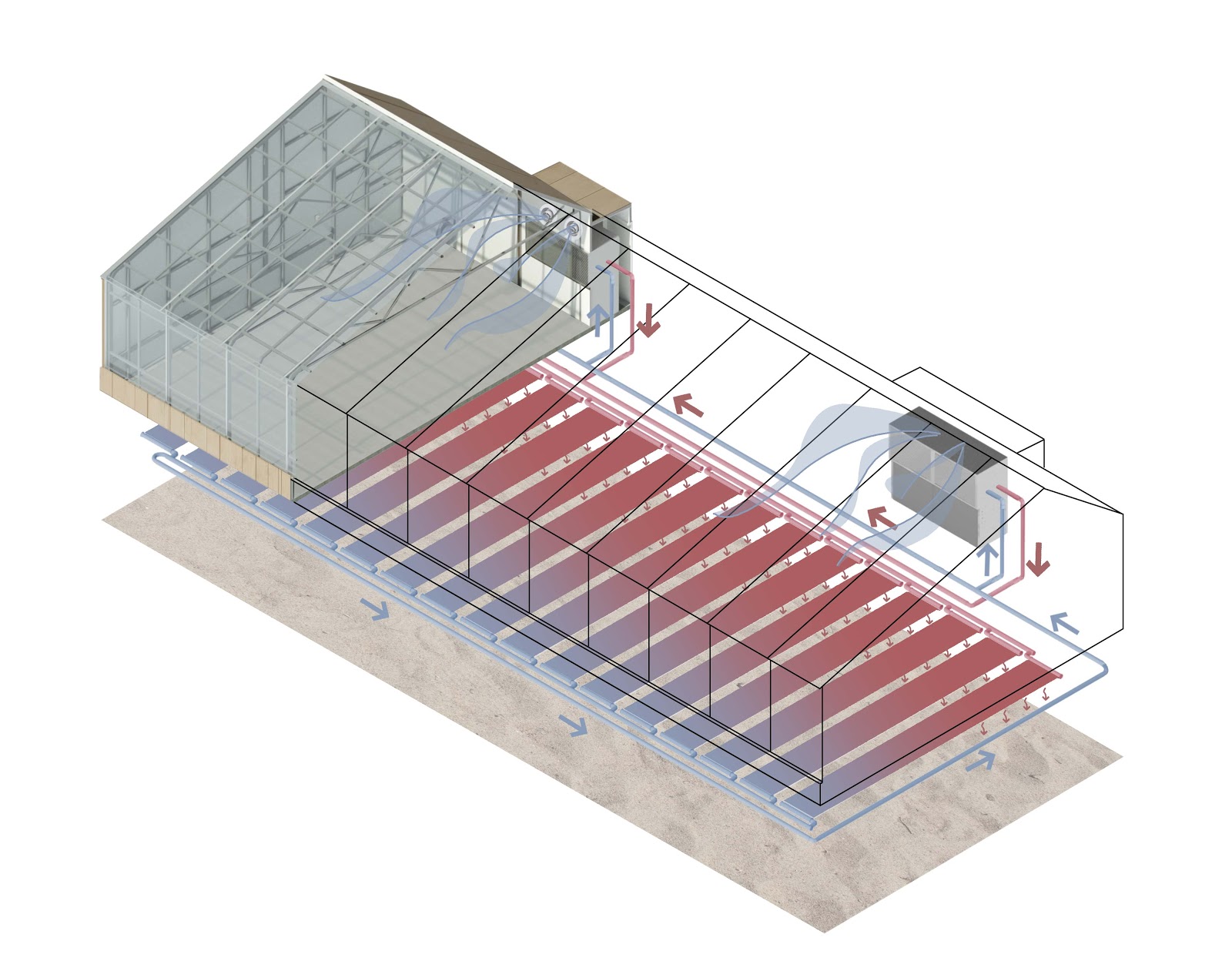 According to the company, the Ecoloop is a ground-coupled heat pump system that heats, cools and dehumidifies sealed greenhouses. It acts as a geothermal HVAC system that utilizes the Earth’s steady temperature (between 7°C- 15°C) to create precise climates in each greenhouse environment.

Ecoloop is made up of two primary components: a ground source heat pump and a ground loop. The ground source heat pumps are attached to the North wall of the greenhouse, above ground. The pumps filter and condition CO2-rich air from inside the sealed greenhouse environment. The ground loop component transfers thermal energy to or from the greenhouse heat pumps. This is achieved by recirculating water through subsurface piping. The recirculating water will either absorb heat from the ground (Ecoloop in heating mode) or disperse heat back into the ground (Ecoloop in cooling mode). The system can also dehumidify the air down to 40% relative humidity, says Ceres.

Because of how it’s structured, the Ecoloop offers a greater level of biosecurity. “Air is recirculated between the sealed greenhouse environment and heat pump only, which transfers the heat or coolness to the ground loop system, without outside ventilation,” explains Haley Bridgnell of Ceres. Each greenhouse also has its own Ecoloop system, meaning no mixing from greenhouse to greenhouse.

Designed for all climate zones, the system is also easily expandable as more houses are added. Unlike traditional HVAC systems that create unwanted shading, Ceres says that Ecoloop takes up no room inside the greenhouse, which helps optimize use of the sun.

The geothermal qualities of the Ecoloop classify it as a renewable energy source and can qualify growers for provincial rebate offers where available. Ground coupled heat pump systems have a comparable upfront cost to chillers but GCHP system’s life expectancy is longer and its energy consumption is significantly lower, says Ceres.

While Ecoloop has a larger startup cost than vented greenhouses, the company estimates that growers can expect to save more than 60% on energy costs compared to a traditional HVAC system. A traditional HVAC system uses 87.5 kWh of energy per square foot per year whereas the Ecoloop uses 35 kWh. To translate that to dollars, growers will spend about $10.50/ sq ft/ year to use their HVAC system whereas they could be spending $4.20/ sq ft/ year with the Ecoloop.

Currently, the Ecoloop system is only available for sale with Ceres’ greenhouses.

*Numbers based on a 24k sq. ft. greenhouse (+headhouse) in Boulder, Colorado. Costs calculated in USD.