May 25, 2009, Leamington, Ont. — Twenty Ontario greenhouse growers have amalgamated their resources to better serve the produce industry. The new company becomes one o 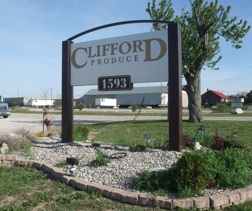 The company will operate as Clifford Produce and continue to ship under the Paysanne label. ”This new group gives us the size and resources to be a major player in the industry,” said Reno Vespa, owner of Vespa Farms and president of the new Clifford Produce. “Each of us was an independent company, but there were many similarities in how we ran our businesses. We grew the same products. We’re all family-run operations with similar company cultures and a strong focus on customer service.”

Each of the 20 companies involved in the merger is a local grower and supplier of one or more of the following:
• Beefsteak and vine tomatoes.
• Cucumbers.
• Peppers.
• Other specialty produce products.

“There is a great deal of synergy already at work in the new company,” said vice-president Guy Totaro. “We’re extremely excited about the merger and our prospects for growth.”

Clifford Produce has been a supplier of premium hydroponic produce for over 30 years. The owners – second and third generation greenhouse growers – continue the Clifford Produce tradition of providing quality produce with exceptional service and strong industry relationships.