Latest addition brings company’s total greenhouse space to about 2.5 million square feet of production in Chilliwack and Rosedale in British Columbia and in Iron Springs in Alberta. 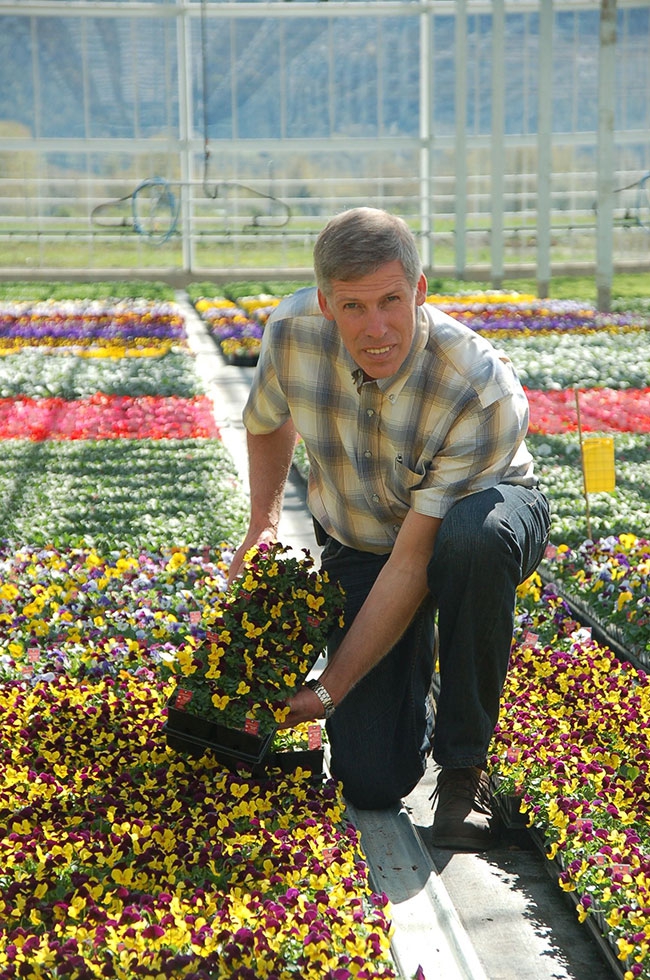 Stan Vander Waal takes a closer look at some plants.

There is a future in flowers.

The addition brings Vander Waal’s total greenhouse space to about 2.5 million square feet at Rainbow Greenhouses in Chilliwack, B.C., and Iron Springs, Alta., and Rosedale Greenhouses in Rosedale, B.C. That is a far cry from the 3,000-square-foot greenhouse he started out with just over 20 years ago.

“I could never have imagined you would get to this,” his neighbour from that first greenhouse told him as he toured the magnificent new complex.

Vander Waal’s existing greenhouses are all double-poly gutter-connected houses, making the new Chilliwack house his first venture into glass. It will not be his last since glass provides “added light and more crop flexibility.”

Light is not a big issue on the prairies so he will continue to build poly houses in Alberta but future expansion in Chilliwack will all be glass. And there will be future construction.

Vander Waal says the new Chilliwack greenhouse is the first phase of a four-phase project that will see the size of his home operation nearly double from the current 910,000 square feet to about 1.8 million square feet within 10 years. “Our next project here will be a 200,000-square-foot addition.”

The new greenhouse is completely connected to the poly houses but walls and dividers in both the older houses and the new house mean the complex is actually divided into 22 zones that can each be programmed for a different climate, giving Rainbow the opportunity to grow a huge array of crops.

And Vander Waal does grow a vast array, noting “we have about 250 SKUs. We did over 20,000,000 plugs last year with a robotic transplanter.”

Water is something Rainbow is putting increased emphasis on, including how it acquires it and how it uses it.

The Chilliwack greenhouse recycles 100 per cent of the excess water while the Iron Springs and Rosedale greenhouses recycle about a third of their water. To supplement his water sources, Vander Waal already collects rainwater in Alberta and will add that capability during his next Chilliwack construction phase.

“We’re as sustainable as we can be,” he notes.

Crops are grown both on the floor and high above, which at the time of the open house were almost totally obscured by row on row of hanging baskets being readied for spring sales. Snow compresses the growing season in Alberta but the Fraser Valley’s moderate winter climate allows him to grow year-round in B.C. However, spring remains the most concentrated production and sales period.

“We do 60 per cent of our business in just eight weeks.”

Most of that goes to three customers: Walmart, Home Depot and Costco.

“We provide them with indoor colour, outdoor bedding plants and hanging baskets,” Vander Waal says. “Our sales are geared towards working directly with our buyers. We include a lot of merchandising programs and even have people working at the store level to make sure our product always looks good.”

Stan Vander Waal takes a closer look at some plants.

That’s because his growth is inextricably tied to the growth of those three customers, Walmart in particular.

“They not only continue to open new stores but their year-over-year sales in existing stores are also growing.”

Vander Waal employs about 200 Canadians and over 75 seasonal workers from Mexico (48 in B.C. and 30 in Alberta). It is a testament to his management that many are long-term.

“We have four 15-year employees and our head grower has been with us over 17 years,” he notes.

Despite focusing on big box retailers, Vander Waal has not put all his eggs, or in this case flowers, in just three baskets. He is also vice-chair of United Flower Growers Co-op, saying the auction provides “balance” for his production.

Although only about one per cent of his production goes through UFG, he notes percentages are relative.

As if his vast operation, non-stop construction and duties at UFG do not keep him busy enough, Vander Waal recently took on the chairmanship of the B.C. Agriculture Council, B.C.’s pan-agricultural body.

That gives him a look at the bigger picture in agriculture and direct input into the issues it faces. One of the biggest in front of him is a new packaging recycling regulation. It will cost him about $15,000/year in recycling fees and a lot of extra work to determine just how much he owes.

“This is a real challenge for the industry,” Vander Waal says, noting it hits nursery and flower growers the hardest among agricultural producers.

David Schmidt is a freelance writer in British Columbia.