Feb. 12, 2010, Guelph, Ont. – Food Freedom Day arrives the same time as
last year. On Feb. 12th the average Canadian will have earned enough income
to pay their grocery bill for the entire year.

Feb. 12, 2010, Guelph, Ont. – Food Freedom Day arrives the same time as
last year. On Feb. 12th the average Canadian will have earned enough income
to pay their grocery bill for the entire year. The Ontario Federation of
Agriculture (OFA) reports that it has taken the average family just 43 days
from Jan. 1st of this year to acquire the income needed to cover annual food expenses
(on a per capita basis). 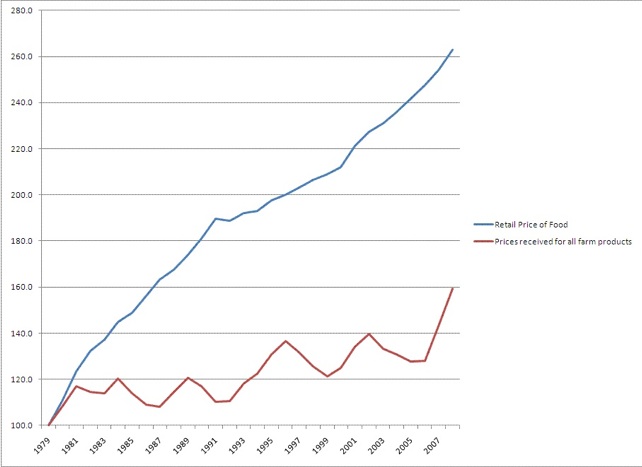 “As farmers in Ontario and across the country celebrate the vital role
they play in feeding a growing population, they remain proud of their role in
providing food under the highest food safety and environmental standards, and
yet Canadian consumers still enjoy one of the most affordable food supplies in
the world. Ontario consumers can be confident that from farmgate to the table,
the safety, quality and value of Ontario grown food is second to none.”

For Food Freedom Day 2010, the Canadian Federation of Agriculture (CFA)
reviewed food prices over the past 30 years at both the farmgate and retail
levels. This research highlighted the work of farmers in ensuring Canadians
receive great value for their food dollar. The statistics continue to show the
increasing gap between retail price and what the farmer is paid for his or her
food.

The Farmers’ Share, a recent study commissioned by Prairie members of the
CFA, showed that, on average, only 27 per cent of the cost of an entire week’s
worth of groceries for a family of four goes back to the farms where the food
is produced. “While prices Ontarians pay for food has been steadily increasing
over the past 30 years, the farmers’ share is relatively small,” says Crews.

Food
Freedom Day is designed to raise awareness of the contributions made by
Canadian farmers, and to also serve as a reminder to Ontarians of the value,
diversity and quality of Ontario grown food. Buying local and properly labelled
Canadian products can preserve this advantage. Visit http://www.ofa.on.ca/uploads/Videos/SlicedBread/VIDEO_TS/SlicedBreadEng.swf
for farm footage.