Features Flowers
CAST 2022: Behind the scenes and on the road 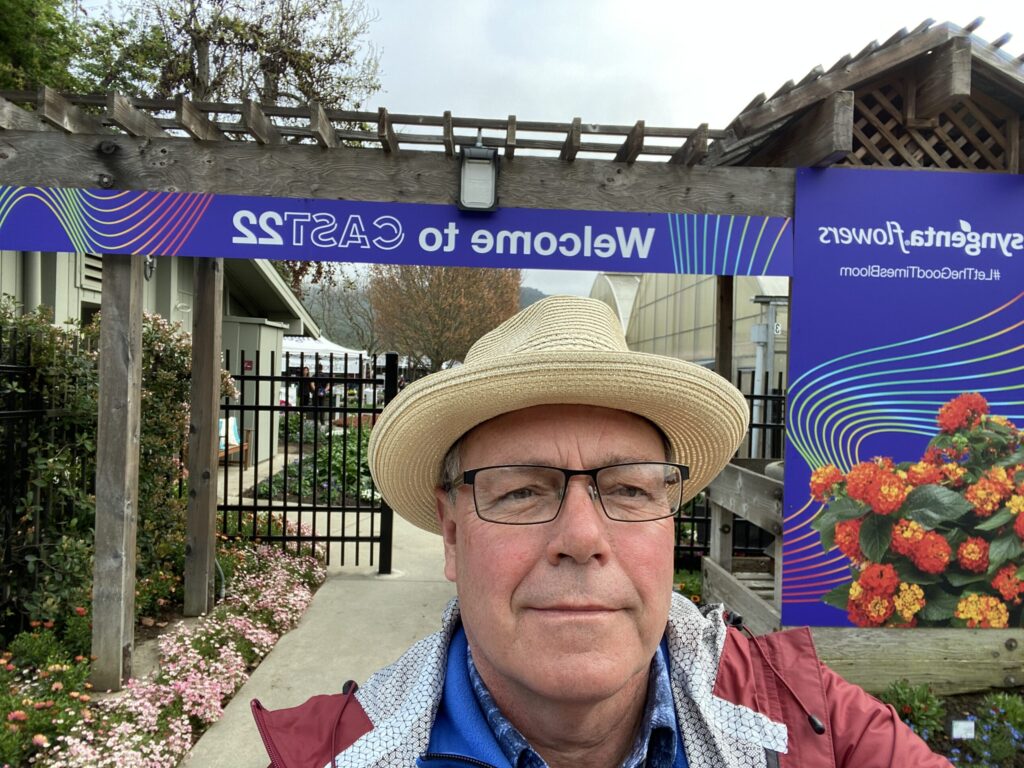 Rounding out his coverage of the California Spring Trials, University of Guelph trial garden manager, Rodger Tschanz, shares his experiences and thoughts from the road with Greenhouse Canada in this virtual Q&A.

Q: This was your second year at the California Spring Trials! Knowing what to expect this time around, how did it change your approach to covering the event?

I knew there was going to be a lot of plant material. The big difference was, I had a good idea of how it was going to be presented at each site this time. I was better able to focus on what was new as far as genetic material goes.

My approach? I knew I was going to be writing, scribbling and missing things, so I decided to record on my phone. It was raining one day and it would have been really hard to scribble notes, hold an umbrella and take pictures at the same time. I wanted to have as much accurate information as possible. I had a phone that had extra memory and battery, and my DSLR as well – but it was heavy. I also had my camera holder and my microphone. So it was about coordinating – I only had so many arms.

This time around, I tried to make it more interesting and created these video clips. In some cases, I felt the speakers did tailor their answers for the Canadian market, which made us stand out. And with the noise in the background, people could feel like they were there at CAST.

Q: Being a trial garden manager yourself, with trials at U of Guelph, Landscape Ontario and Royal Botanical Gardens in Ontario, how has CAST played a role in your work?

I will be trialling a lot of the plant material that I saw at CAST, so it gave me the opportunity to see what those plants look like in their mature glory. At the same time while I was at CAST, I was getting in rooted liners and I had seed that I was starting in plug trays. To see what the final version would look like helps me plan and anticipate. I plant in the gardens as well as in containers. Getting a better idea of spacing – if it’s a compact cultivar versus something that’s more vigorous – it’s helpful to see that and to help me focus on the innovative parts of it. Let’s say it’s something new – why is this exciting? For me as a trial manager, you’re getting all this plant material arriving over the course of a month and you don’t really get a chance to digest and reflect on why something is special, why a breeder has sent it to you for trialing. It may take a while to get to know the plants. And so, sometimes I really don’t get to know them until the end of August or September. Having a preview of what to expect is useful.

Going to CAST, I also get a chance to meet new breeders that I haven’t worked with before, introduce them to the trial garden program at the University of Guelph and hopefully grow the trial program with those contacts. To see people that I’ve only ever contacted by email – it’s always nice to put a face to a name and to get to know them on a personal level.

Q: If you happen to spot a new introduction at CAST that could be very fitting for the Canadian market, would you be able to request it for trailing?

Yes, that has happened at CAST. It depends on the availability of the plant material. This year, I saw some interesting introductions but there was a shortage. I was unsuccessful at one company but, at another company, they had extra plant material that they were able to send to me. Generally, if the company has the material, they want to encourage you to trial it in as many places as possible.

Q: How much plant material would you typically need for each variety?

We have three trial sites, so it depends. If I have lots of plant material, I trial in all three places. If I’ve got a very limited quantity, I look at whether the trialling material is more container-type, landscape or both. For containers, I would only need three specimens. For landscape, three specimens might get lost – it depends on the vigour of the plant. But the more plant material, the more places I can plant it.

Q: We know you’re writing a couple of longer features with in-depth CAST coverage for Greenhouse Canada later this year! But generally speaking, what were some of the overaching trends you saw in new innovations at CAST?

The expansion of disease resistance was one. At Ball, we saw the innovation of introducing impatiens downy mildew (IDM) into the Glimmer series of double flowered impatiens. This comes approximately three years after the industry was introduced to two seed series of single-flowered IDM-resistant impatiens – Ball’s Beacon series as well as Syngenta’s Imara XDR.”

There are always new colours and some stand out. There was one perennial in the videos – the new Red Lark Delphinium which was really nice and stocky, and it was a very new colour for a delphinium of that type. You can just imagine it being consumer-friendly. It handles well, doesn’t break, and ships well. I wish I could trial it, but there just wasn’t enough material. Then there was a scented cyclamen from Morel which was really nice and different. There was also a dianthus from GreenFuse that had just so many different colours on one plant.

In general categories, all the perennials seem to be first-year blooming. There’s this trend towards using perennials like we traditionally used annuals in containers. Before, you would never mix perennials and annuals in the same container, but why not now? If you can get your textures and your colors into something really solid, why not? That seems to be the trend.

I think that the greenhouse industry is going to have to do its part as far as becoming more environmentally sustainable. In the case of Benary with the completely biodegradable seed coatings, there were no plastics or microplastics involved in coating their seed – it’s very distinctive and memorable

Q: You’ve been working in floricultural education and research for close to 25 years now. What motivates you to do what you do each day?

Imagine getting up every morning, going to work and being surrounded by flowers. Working with plants, there’s always something different, unique, and I’m learning constantly. I don’t know it all, by any means. There’s always that joy of learning something new.

Working with flowers, of course, also attracts other like-minded people. Giving tours of the greenhouse to students and seeing their joy and their wonder is wonderful. I have a number of high school co-op students working with me right now, and I’m just amazed at the interest in tropical plants that has developed. To have students walk through our tropical plant collection and identify all the plants? To me, that’s exciting. I get to work with these youngsters, to act as a mentor and to foster that interest. I have a personal sense of growth, learning constantly, seeing new things, and interacting with people in the industry who have the same joy of working with plants. There’s always something different. I really do enjoy going into work every day.

While on the road, Tschanz also spoke with product representatives about new seed technology, as well as the story behind Ball’s tagline ‘Colour the World.’ Watch the video shorts here:

For in-depth coverage of the California Spring Trials, stay tuned for Rodger’s features in this year’s issues of Greenhouse Canada.

For video highlights from the road of new varieties at each stop, check out https://www.greenhousecanada.com/tag/cast2022/

Thank you to Ball Seed for their generous support of on-the-ground transport and accommodations and for making coverage of CAST 2022 possible.