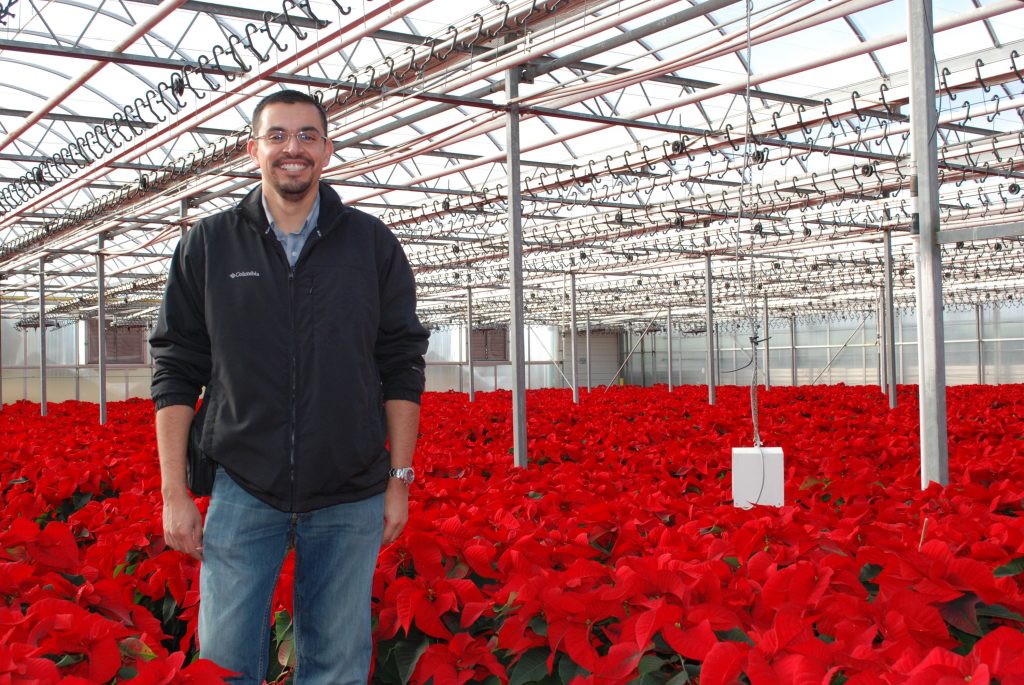 Roberto Lopez is pictured in a Purdue University test greenhouse.

Growers who carefully select their poinsettia cultivars can lower their greenhouse thermostats in mid-October to save on energy costs and produce high-quality plants, according to a Purdue University-University of New Hampshire study.

Roberto Lopez, an associate professor of horticulture, said that poinsettia cultivars that initiate and finish within six to eight weeks, are moderate to high vigor and have naturally large bracts that will do just fine in cooler temperatures if flower producers want to save on heating expenses.

The team’s findings, reported in the journal HortScience, showed that 10 red poinsettia cultivars finished under cooler temperatures simply need to be planted a little earlier to be ready for holiday sales. “Over the past 10 years, energy prices for growers have increased more than 230 percent. As a result, many growers stopped growing poinsettias or lowered their thermostats without knowing what the cultivar-specific consequences would be,” Lopez said.

“Now we know that they can save money by reducing finishing temperatures, but they have to plan ahead a little and work with the breeding companies to make sure they are using the correct cultivars.”

Poinsettias are native to tropical forests of Mexico and Central America, so growers must heat their greenhouses to about 75 degrees during the day and 67 at night in order to grow the crop in the United States’ temperate climate.

Lopez; Diane Camberato, a greenhouse technician; and Brian Krug, an Extension specialist at the University of New Hampshire, tested daytime temperatures at about 70 degrees and 68 degrees, and nighttime temperatures at 63 degrees and 55 degrees. The cooler the temperatures, the longer it took for the poinsettias to reach marketability. But other than that, they were similar in size, color and other characteristics.

The cultivars took anywhere from two days to three weeks longer to flower under the reduced temperatures. Lopez said growers would need to start their poinsettias a week or two earlier in August. That would increase some production costs, but taking advantage of naturally warmer temperatures in August to promote vegetative growth would offset those costs. “Using these reduced finishing temperatures, a poinsettia grower could save a significant amount of money on energy costs,” he said.

Growers who have already started poinsettias this year could potentially finish their plants in cooler greenhouses, assuming they are growing cultivars that can be cold-finished, Lopez said.

The Fred C. Gloeckner Foundation provided funding for the research.