October 28, 2008By The Oppenheimer Group

Oct. 28, 2008, Vancouver, B.C. –
When is a ‘green’ pepper not a green pepper? When it’s a vibrant red,
bold orange, or sunny yellow sweet bell pepper – grown, packed and
transported in a certified carbon neutral manner.

Oct. 28, 2008, Vancouver, B.C. – When is a ‘green’ pepper not a green pepper? When it’s a vibrant red, bold orange, or sunny yellow sweet bell pepper – grown, packed and transported in a certified carbon neutral manner. 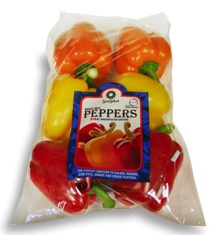 When SunSelect Produce Inc., of Aldergrove, B.C., delivered its first carbon neutral peppers earlier this summer, the grower accomplished a goal to become “greener” that has been several years in the making.
Carbon neutrality is achieved when the carbon dioxide emissions released into the atmosphere from a product’s production, or carbon footprint, are balanced out with CO2 emission reductions in other areas, such as transportation or energy use.
For SunSelect, this meant replacing non-renewable energy sources with environmentally-friendly biomass – a sustainable fuel made of organic matter – and decreasing overall energy use. These measures have ultimately resulted in 30 acres of ‘carbon neutral’ peppers being grown under glass.
“We are very cognizant of the sensitivity and environmental consciousness of today’s consumer,” said Reinhold Krahn, who owns SunSelect along with his brothers Victor and Leonard, and sister, Edith Gubiotti. “We are responding with growing practices that respect the environment, and yield a unique product that speaks to this important value.”
With the certification seal boldly displayed on the packaging, SunSelect carbon neutral peppers help demonstrate how good for the Earth greenhouse production can be, and the environmental benefits it can deliver that field production can not, like more productivity per acre of land and the recycling of fertilizer, according to Krahn.
The grower has invested millions of dollars in the construction of wood waste energy plants at its greenhouse locations in Aldergrove and Delta, B.C. After obtaining the wood waste – also known as biomass – from a local saw mill, SunSelect employs boilers to create heat. The heat circulates through the boiler tubes, raising the water temperature and heating the greenhouses.
“This process releases the same amount of carbon dioxide equivalents into the air that would be released when the plant decomposes naturally,” Krahn explained. “Because the biomass is collected from existing waste streams and displaces new consumption of natural gas, the displaced gas consumption constitutes an additional emissions reduction.
This approach, combined with other innovations in actually capturing carbon dioxide, has recently earned SunSelect an award from the British Columbia Innovative Clean Energy Fund.
“We learned that we could actually earn carbon credits by replacing natural gas as a source of energy with renewable biomass,” Krahn continued. “These credits can be used to offset carbon emissions arising from the transportation of our produce to market.”

Carbon credits are like certificates that represent a specific reduction of emissions in the atmosphere. Each credit represents the removal of 1,000 kilograms of carbon dioxide from the atmosphere. Verification of a company’s credits is provided through an approved carbon offsetter. Once verified, the carbon credits can be traded to other businesses and individuals to “offset” the emissions they generate.
SunSelect carbon neutral peppers are available from The Oppenheimer Group through mid-November.
“We encourage our growers to consider the impact on the environment and implement responsible growing practices,” said John Anderson, the Vancouver-based marketer’s chairman, president and CEO. ”The excellent strides being made by SunSelect exemplify our shared commitment to putting sustainability front and centre.”
And SunSelect’s efforts are making a quantifiable difference. Based upon actual heating bills for the system and standard energy models, a third-party auditing group, A.D. Williams Engineering, Inc. of Edmonton, Alberta, verified SunSelect’s emissions reductions as approximately 7,500 metric tons per year, relative to the conventional natural gas baseline.
SunSelect has also introduced energy curtains to reduce overall energy consumption, to trap heat at night.
The carbon neutral certification of SunSelect’s greenhouse grown peppers is provided by The Offsetters, Vancouver, one of Canada’s premier licensed providers of quality carbon offsets. At this point the certification is specific to SunSelect’s packaged pepper program.
“It is hard to make the consumer aware of the carbon neutral status of bulk peppers,” Krahn said. “Though all 70 acres of greenhouse peppers, cucumbers and tomatoes are produced in the same energy-efficient manner, at this point we have just certified packaged peppers for full carbon neutral status, though we expect our other production will also be certified soon.”