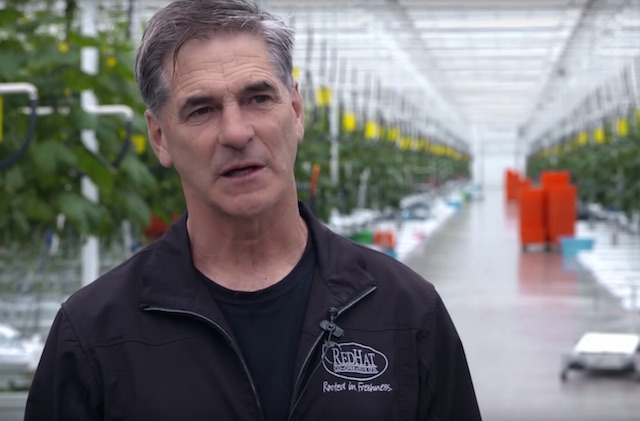 Albert Cramer, chair of Red Hat Co-operative and vice-chair of the AGGA. AGGA

Oct. 28, 2016 – Alberta’s new carbon levy will have a serious impact on greenhouse growers in the province.

The Alberta Greenhouse Growers Association (AGGA) has released a video that outlines the current regulatory challenges facing the industry.  The Alberta Government’s Carbon Levy will create an uneven playing field in this highly competitive sector.

Some 88 per cent of greenhouses rely on natural gas or propane to grow local crops, both for energy to heat the greenhouses and to capture CO2 to feed to the plants as fertilizer.

The carbon levy will add $5 million dollars in direct costs to greenhouse operations in 2017 alone. This puts Alberta-based greenhouses at a competitive disadvantage with growers in British Columbia, Ontario, the U.S. and Mexico.

The cumulative effects of recent regulatory changes are creating an uncompetitive environment in Alberta for greenhouses. This includes the changes to the minimum wage, outdated building codes for greenhouse structures, uncertainty in employment standards and labour codes and the additional costs of the carbon levy.

AGGA is looking forward to working with the Alberta government on a plan to help grow the greenhouse sector and provide Alberta families with access to the best locally grown vegetables and plants.

B.C. greenhouses are also faced with a similar carbon tax to Alberta. The difference, however, is that B.C. growers are able to claim 80 per cent of the carbon tax paid as a rebate to the business.

For greenhouses, natural gas is as important as gasoline and diesel fuel is to traditional farming. The government of Alberta has already announced an exemption to dyed farm fuels from the carbon levy.

Why won’t they do the same for natural gas with greenhouses?

AN IMPEDIMENT TO INVESTMENT IN ALBERTA

Without a similar playing field, Albertans will be faced with less access to local fresh produce, and investment in the greenhouse sector will shrink rapidly.

Alberta enjoys high quality light, which makes it an ideal location for greenhouses. However, Alberta companies considering expansion are now looking to neighbouring provinces and states for the cost-savings on fuel alone.