Canadian peat harvests at critical levels
The Canadian Sphagnum Peat Moss Association
(CSPMA), whose members represent 95 per cent of North American peat
production, is concerned with the level of harvest for the 2008 season.

The Canadian Sphagnum Peat Moss Association (CSPMA), whose members represent 95 per cent of North American peat production, is concerned with the level of harvest for the 2008 season.
According to CSPMA president Paul Short, the Canadian peat harvest was only at 43 per cent – and carry-over inventory at 17 per cent – at the end of August. This is a record low of 60 per cent in comparison to the last five-year average of 75 per cent. The inevitable result will likely be a shortage of professional grower peat.
Abnormal and persistently wet conditions throughout all Canadian peat harvest regions have impacted the ability of the industry to harvest expected volumes. The area most hard hit is Eastern Canada, with New Brunswick and Québec accounting for 66 per cent of Canadian peat production.
The industry is facing one of its poorest peat harvest seasons on record. It is committed to working co-operatively with its commercial business partners to minimize the short and long-term impacts for the horticulture industry.

Vacuum harvesters are used to collect approximately 95 per cent of the peat harvested in Canada.

According to the CSPMA Preservation and
Reclamation Policy, a layer of peat about three feet thick is left when
harvesting ends.
(All photos courtesy CSPMA)
Advertisement

One of the steps in restoring a bog is to spread sphagnum fragments onto the site. The fragments contain seeds or spores from all the natural bog plants, not just the sphagnum moss.

Usually three to five years after planting, sphagnum and many of the other bog plants such as pitcher plants, sundew, Labrador tea, bog rosemary and some swamp spruce start to appear. 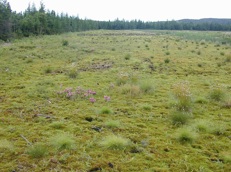 Regrowth starts in the first two years after the fragments have been spread on a restored bog.