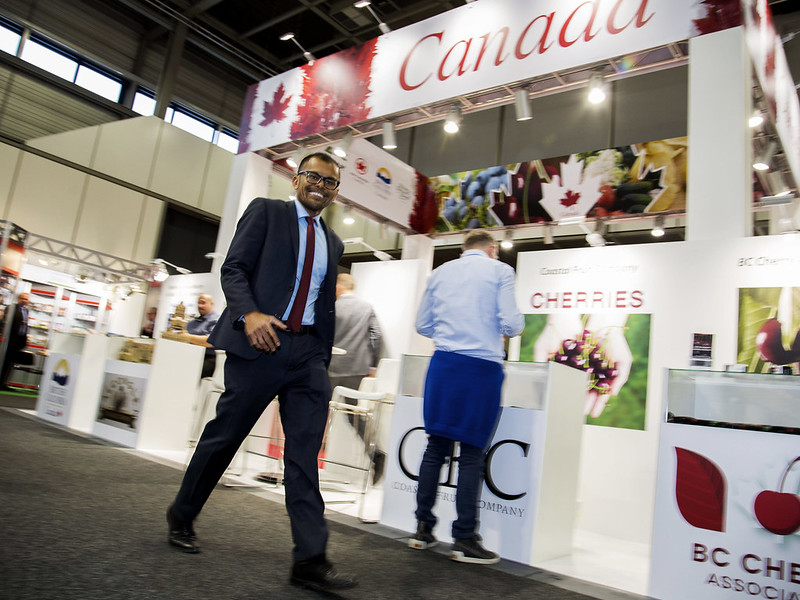 Canada is returning to the world’s largest fresh produce trade show, Fruit Logistica, for a fourth consecutive year under the Canadian pavilion, aiming to showcase some of the top innovations and fresh produce the country has to offer.

“It is wonderful to see a strong Canadian delegation for a fourth consecutive year, where the delegates are just a small sample of what the country has to offer – from fresh produce such as apples, potatoes, blueberries, cranberries and cherries to even innovative sustainable packaging,” says economic development expert Richie Santosdiaz, who helped spearhead Canada’s presence four years ago.

Although Canada has a reputation for harsh winters, it’s also the world’s second largest country in terms of land mass. In fact, its varied landscape, from milder temperatures near the US-Canada border, particularly in the Western province of British Columbia (BC), the Great Lakes region such as the southern part of Ontario, and the Atlantic provinces, allows for the country to have a wider-ranging horticulture industry, playing a huge role in the global produce industry.

The Canadian delegates, who will be based in Hall 23 during Fruit Logistica Berlin, include: CFP, CKF, Summerland Varieties Corporation, Dispute Resolution Corporation (DRC), Canadian Produce Marketing Association (CPMA), Sun Valley Cranberries and Potatoes Canada. Air Canada Cargo is the official sponsor for the Canadian pavilion, which is organized by B-FOR International in partnership with the Canadian Consulate in Germany.

“Fruit Logistica is an ideal forum to promote the Canadian fresh fruit and vegetable sector,” says Sue Lewis of the CPMA and one of this year’s delegates. “Canadian consumers are continually exploring new products and flavours and we look forward to seeing what the world has on offer, while promoting our own Canadian high quality, nutritious and great tasting fruit and vegetables.”

According to Agriculture and Agrifoods Canada (AAFC), Canada exported $695 million CAD ($526 million USD) in fruits and $1.8 billion CAD ($1.36 billion USD) in vegetables (comprised of field vegetables, greenhouse vegetables, and mushrooms) in 2017. Besides maple syrup, which the country accounts for over 70 percent of the world’s supply, Canada is a leader in other commodities such as cranberries and blueberries. In the greenhouse category, Canada produces tomatoes, cucumbers, lettuce, peppers, green beans, eggplants, herbs and microgreen vegetables.

Another delegate, Brad Dennis from CKF Inc, which won the bronze award at last year’s Fruit Logistica Innovative Awards for Earthcycle™ their line of home compostable and recyclable packaging, says, “We are experiencing strong demand from the international community, in particular European countries, as they introduce policies and incentives to reduce single use plastic. The Fruit Logistica show helps CKF deliver our message of less plastic and more recyclable and home compostable packaging that extends shelf life and performs in highly automated packaging environments.”

With the provisional implementation of the Canada and the EU free trade agreement called the Comprehensive Economic and Trade Agreement (CETA) now in its fourth year, as well as other agreements in which Canada is a part of, such as the Comprehensive and Progressive Agreement for Trans-Pacific Partnership (CPTPP or TPP11) and the recently renegotiated trade deal between the US, Canada and Mexico (formally known as NAFTA),  Canada’s presence at FruitLogistica shows that it is ready to do business across the globe.