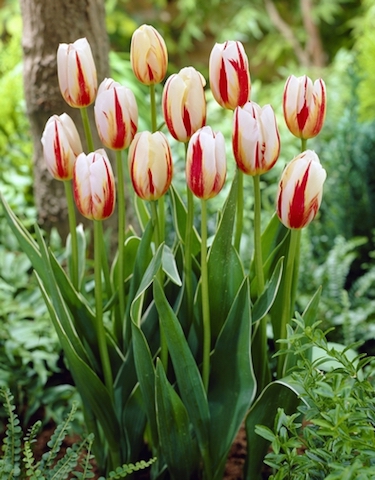 May 16, 2016, Ottawa – The Canada 150 tulip, the official tulip of Canada’s 150th anniversary, has been unveiled in Commissioners Park.

More than 200,000 Canada 150 tulips are blooming across the National Capital Region this spring.

The Canada 150 tulip is white with red flames and bears a striking resemblance to our Maple Leaf flag. The National Capital Commission (NCC) has partnered with the Kingdom of the Netherlands, Home Hardware, exclusive retailer of the tulip bulb, and Communities in Bloom for the selection and distribution of the Canada 150 tulip.

During sesquicentennial celebrations in spring 2017, some 300,000 Canada 150 tulips will be showcased in the NCC’s flower beds, and thousands more will bloom in community gardens across Canada.

The public can purchase the Canada 150 tulip bulb at participating Home Hardware stores nationwide, as of September 2016, so they can enjoy their beauty during Canada 150 celebrations in spring 2017.

As the official gardener of Canada’s Capital, the NCC is responsible for designing and planting the close to one million tulips, in 100 varieties dispersed in 100 flower beds, that brighten the region in springtime.

The most spectacular display of tulips is in Commissioners Park, by Dows Lake where 250,000 tulips, of 60 different varieties, bloom in the park’s 30 flower beds.

The first tulip beds in the Capital were planted in 1945, when the Netherlands sent 100,000 tulip bulbs as a postwar gift in gratitude for the role that Canadian soldiers had played in the liberation of the Netherlands.

“Tulips are a symbol of springtime, rebirth and promises, which make them a powerful symbol in the lead up to the celebration of Canada’s 150th birthday,” said MP David McGuinty, representing Heritage Minister Mélanie Joly.

“The tulip represents the longstanding friendship and gratitude between Canada and the Netherlands. Blooming in the colours of Canada’s flag, Canada 150 tulips will bring both pride and joy to gardens and communities from coast to coast,” added Cees Kole, Ambassador of the Kingdom of the Netherlands.

Home Hardware is the exclusive retailer of the Canada 150 tulip bulb.