A research update on the pest’s natural enemies. 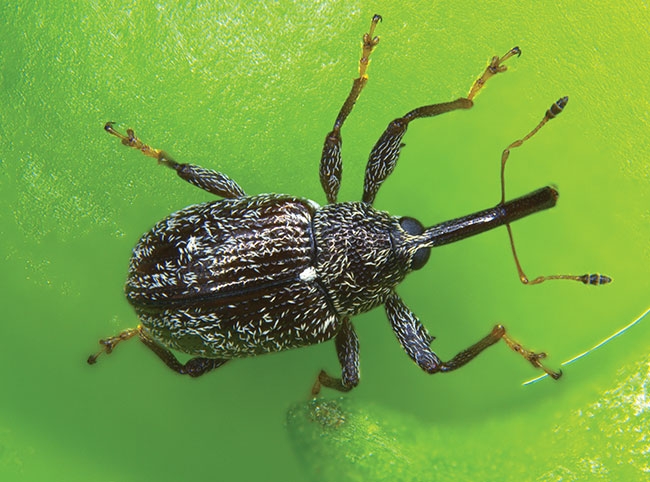 The pepper weevil, Anthonomus eugenii is one of the most important pests of pepper crops in North America. Currently, there are no commercial products that can target immature stages of the pepper weevil, however strategies including biological control, may be useful in attacking these life stages and reducing population levels.

Of the parasitoid species previously identified from surveys in Mexico and Florida, three species of parasitoids, Triaspis eugenii, Urosigalphus sp., and Jaliscoa hunteri account for 96 per cent of all parasitoids that naturally attack the pepper weevil (Rodríguez-Leyva et al., 2007). Jaliscoa hunteri, attacks the third instar larvae, and the braconid Triaspis eugenii attacks the egg. These three species are therefore considered to be the most important in reducing pepper weevil infestations.

To investigate the potential for biological control of pepper weevils in at-risk areas including Canada, surveys of the pepper weevil and its natural enemies were conducted in southern Ontario following brief reported sightings in 2016 and 2017. From these surveys, significant differences were seen in Ontario’s weevil levels between 2016 and 2017 (Figure 1) – the abundance of the weevil was dramatically lower in 2017. This change is thought to have been due to the application of multiple new management practices, such as stringent pepper waste disposal protocols and crop scouting, as well as tools such as screening, which could have minimized weevil presence.

In 2016, peppers infested with pepper weevil were collected from 10 field and greenhouse sites in Ontario. These peppers were maintained in mesh bags in a controlled environment chamber at the Harrow Research and Development Centre (AAFC), and the emergence of weevils and parasitoids from these was monitored daily for up to six weeks. From these infested peppers, a total of 43 parasitoids emerged and were identified as parasitoids able to attack and kill the pepper weevil. In 2017, the near absence of the pepper weevil in field crops meant that naturally occurring parasitism of the pepper weevil was not observed in samples taken to the research station that year.

Jaliscoa hunteri is considered one of the most important parasitoids of the pepper weevil that is now naturally well distributed throughout North America. Field trials in Florida have shown that J. hunteri can significantly reduce the number of weevil-infested peppers (Schuster 2012). Together, these new records of the pepper weevil’s natural enemies could facilitate the exploration and development of new agents for biological control. We are currently performing laboratory and greenhouse trials with J. hunteri to identify the factors that can improve its parasitism of the pepper weevil on commercial greenhouse pepper crops.

This research was funded through an AAFC project A-1526, Biological Control of Agricultural Pests, as well as a Collaborative Framework project through the Ontario Greenhouse Vegetable Growers 2117- Management of the Pepper Weevil.  Future trials evaluating the efficacy of parasitoids for suppression of the pepper weevil will be conducted through an Industry-led Research and Development project with the Canadian Horticultural Council (CHC) 2607- Pepper Weevil Integrated Management and with collaborator Koppert Canada.

Roselyne Labbé, PhD, is a research scientist in greenhouse entomology with Agriculture and Agri-Food Canada. She can be reached at roselyne.labbe@canada.ca.