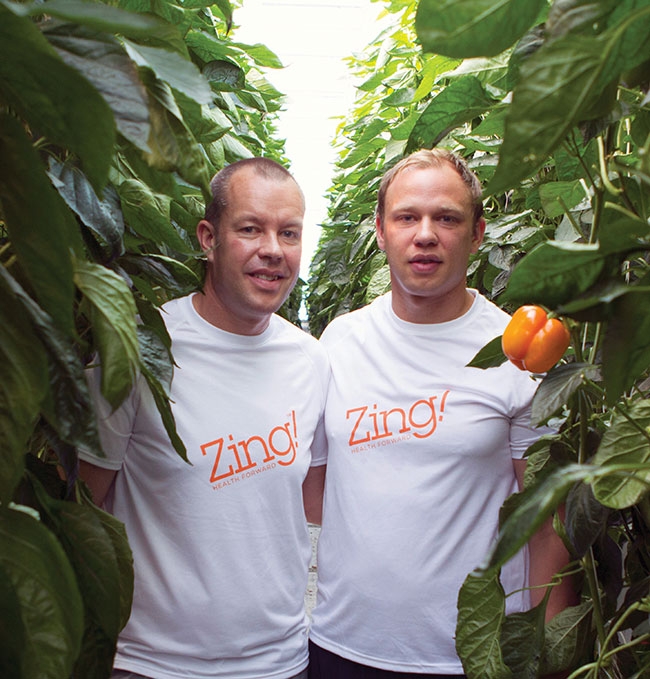 How does a first-generation family-run greenhouse land its branded products in grocery stores across Canada and much of the U.S.? By perfecting its growing process, and adding a little Zing!

Jordan Kniaziew, vice-president of sales and marketing at Leamington-based Orangeline Farms says since his family entered farming in 2000, they’ve focused on finding the best varieties and seed selections for peppers and other crops.

Since 2013, the family has been growing, packing and shipping its own products — including award-winning peppers and greenhouse strawberries – under the Zing! Healthy Foods brand.

“We’re always looking at growing products that fit the taste profiles we’re after,” says Kniaziew. “In peppers, our core product, we’ve seen there’s room for growth in the category overall by growing peppers for every meal – in fajitas or stir-fry, scrambled eggs and as snacks.”

In addition to common red, yellow and orange peppers, Zing! offers packages of “chef samplers” under specific taste profiles such as sweet and hot peppers, as well lunchbox peppers. The company has won multiple awards for its peppers and other products including a Premier’s Award for Agri-Food innovation Excellence for its greenhouse strawberries.

Kniaziew says the family’s initial interest in growing food stemmed from his parents’ first careers in health-related fields. Kniaziew’s father is a local optometrist, his mother is a nurse and his brother studied sciences. The Kniaziews continue to value a healthy, active lifestyle and they see farming as an extension of the health care field.

But an interest in growing healthy food and a proven track record of growing quality greenhouse peppers didn’t necessarily mean an easy road for Zing!. Kniaziew says when the company began its branding process, it had to build its customer base from scratch.

Today, they boast a handful of growing partners and a staff team that reaches 85 at peak season and Kniaziew says the company continues to grow its family of products with a focus on maximizing production while maintaining its brand’s superior quality.

“There’s innovation not just in selecting the right variety, but in finding the best way to grow it, pack it, brand it and deliver it to the consumer,” Kniaziew says. “It’s important the consumer gets a full experience, and that the product isn’t being hidden in the back of the grocery store.”